It's time for the longest-running tradition among the top pro-nuclear English language bloggers and authors -- the weekly Carnival -- to again appear at Atomic Power Review after what feels like an extended absence.

This does not mean we'll get right to the posts without asking you..  "What is this?" 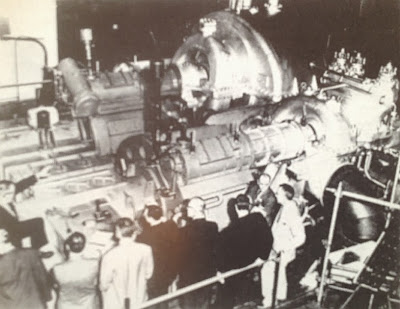 We can see a number of people arranged around some equipment, with someone at the far left pointing toward some of it.  This means that the answer to this question cannot be "a bunch of guys standing around machinery."  Some of you will do far better than that... and there is partial credit available for this photo.  All will be revealed..  AFTER the Carnival entries!
----------
Next Big Future - Brian Wang
Watts Bar 2 on schedule
The construction of TVA's Watts Bar 2 plant is said to be "on track;"  also, more reactors for Pakistan and Jordan signal a trend growing elsewhere.
Brian Wang interviewed on fusion energy
Amongst the most secretive and best-financed is Tri-Alpha energy. They’ve released nothing more than a Powerpoint, but have raised somewhere over $140 million from the likes of Goldman Sachs, Microsoft co founder Paul Allen, Russian tech investment firm Rusnano, and, weirdly, former LA Law star Harry Hamlin.

“For some reason the rich guys like however Tri-Alpha presented,” says Brian Wang...
There was no Fukushima Disaster
A popularly shared (and highly commented) article discusses the assertion that there was no nuclear disaster per se at Fukushima; only a media fuelled frenzy.  (APR note:  A highly provocative concept and article!)
----------
Deregulate the Atom - Rick Maltese
The Human Erosion of Progress and Will
APR note:  Folks, Rick has provided a synopsis for this piece but I'm going to toss it and tell this to you straight.  This is an IMPORTANT piece to read.  We all need to think in some way or another about how and where we fit into the whole, swirling mass that encompasses energy awareness, energy dialogue, energy policy.  Rick has provided some very thought provoking and even evocative imagery and conception with this post which is certain to leave everyone thinking about what the entire massive range of effects education and involvement can have on everything in society.  I'd like to give this piece a serious recommendation.
----------
Nuke Power Talk - Gail Marcus
The Energy Market and Carbon
This week at Nuke Power Talk, Gail Marcus reflects on the fact that the closure of Vermont Yankee was precipitated by marketplace inequities put in place to encourage renewables. She opines that, if such measures result in the closure of other low-carbon power sources, namely nuclear power, they are counterproductive. However, repealing existing renewable energy benefits without substituting other provisions is likely to be difficult politically. Different solutions are needed.
----------
ANS Nuclear Cafe - submitted by Paul Bowersox
Europe: A Textbook Case of How NOT to Go About Emissions Reductions -by Jim Hopf

What is really needed to effectively reduce emissions of CO2 and
unhealthy pollutants? Jim Hopf takes a look at the situation with the
European Union's energy policies - and finds a bizarre case in which
cap-and-trade combined with renewable-specific mandates and subsidies
work at cross purposes.

Meanwhile, subsidies for ultra-low-emission nuclear energy, in contrast
to the outright mandating of renewables, is a point of great contention.

Result: high costs of power generation, coupled with high emissions.
But there is a relatively simple way to rectify.
----------
The Hiroshima Syndrome - Leslie Corrice
The Business of Being a Fukushima Refugee
How much money have Fukushima refugees received in compensation from Tokyo Electric Power Company?  It took me several days to get my mind around the numbers.  I had a feeling the stipends were considerable, but NOTHING like this.  No wonder so many Fukushima evacuees say they won't go home when the restriction is lifted.  Being a refugee has become big business.
----------
Michele Kearney has asked that I include Barry Brook's "Brave New Climate" piece, a guest post on the effects of radiation written by Geoff Russell.  It's a good piece - it's honest and direct, but not dry.  Here is the link:
Stayin' Alive in the Gene Pool - Part I
----------
Yes Vermont Yankee - Meredith Angwin
A State of Extortion:  Conditions for a Vermont Yankee Certificate
When Vermont Yankee announced it would close, the Vermont Public Service Board was still considering the plant's application for a Certificate of Public Good CPG through 2032. Entergy amended its request, asking for a one-year CPG through the end of 2014. Governor Shumlin's administration immediately recommended that the Public Service Board only give such a certificate if Entergy deposited $60 million in a new fund for decommissioning and sent over four million to the state government to help the state deal with this "sudden, unplanned shutdown." In other words, when it comes to Vermont Yankee, Vermont is still in a state of extortion.
Legislators visit Vernon and are shocked to find economic pain
Sixteen legislators from important committees drove to Vernon, Vermont, the home of Vermont Yankee. There, they went to the Vernon Elementary School to listen to the local reaction to the plan of the plant closing. They seemed quite shocked to find economic pain. However, one key legislator said that they had "more appreciation" of what was going on in the area, and that was a "big accomplishment."
----------
NewsOK Science and Technology - Robert Bruce Hayes
Atomic Energy has Many Similarities to Conventional Energy Production
Another in a series of educational pieces which attempts to educate readers on the realities of nuclear technology, using familiar analogies and relationships.
----------
That's it for this week's Carnival entries!  All that's left is to answer ... "What is this?"
For those of you who said "those look like steam turbines," you get one third credit.  For those of you who recognized this equipment as steam turbine propulsion equipment for a ship, you get half credit.
Anyone who guessed that this was the propulsion equipment for the nuclear powered merchant ship N.S. Savannah gets three quarters credit.  For anyone who guessed that this photo shows the equipment under test BEFORE it was ever installed in the ship -- full credit.
The photo comes from the April 1960 issue of the trade magazine ATOM INDUSTRY.  The original caption says "Shown under test at the DeLaval Steam Turbine Company, this steam turbine will propel the NS SAVANNAH along the world's water routes at a steady 21 knots.  Atomic heat will produce the steam, representing the world's first application of nuclear energy in a merchant vessel.  Carrying a crew of about 110, and with accommodations for 60 passengers and 10,000 tons of cargo, the NS SAVANNAH will be able to operate for 3-1/2 years on one fuel loading.  Under normal operation, the power plant will deliver a steady 20,000 shaft horsepower.  (Joint Atomic Energy Commission - Maritime Administration project.) 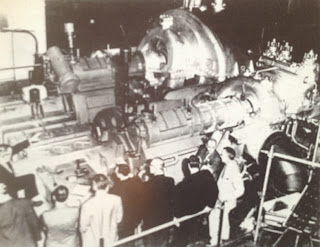 This equipment comprises compounded turbines and reduction gears. In this photo we can see at far right at the upper corner the steam chest and throttle assembly mounted on the high pressure turbine.  The turbine casing, doughnut shaped, is next (to the left) followed by the high speed drive pinion casing, and the big rounded intermediate gear casing on top of the very large bull gear casing.  The other turbine is the low pressure turbine .. much larger, and slower ... with its own pinion and gear casings.  The attachment for an emergency electric drive motor is visible on the end of the low pressure turbine drive pinion casing.
As to the description of the power output; 20,000 HP was the contracted sustained output, but the maximum was higher than this. 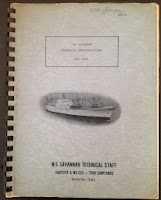 At left we see my copy of the NS Savannah Technical Specifications, May 1964 as published by the NS Savannah Technical Staff jointly manned by Babcock & Wilcox and Todd Shipyards.  Page 17, Specification 6:  "The main propulsion unit shall be capable of delivering 22,000 SHP in maximum continuous duty.  The astern power capability shall be 8,000 SHP.  The propulsion unit shall be equipped with a 750 HP reversible electric motor."
Steam conditions at full rated power were 425 psig and 454 F, with a total steam flow rate of 307,500 lbs/hr.
The steam plant was equipped with a steam dump direct to the condenser which could handle a maximum flow rate of 190,000 lbs/hr. 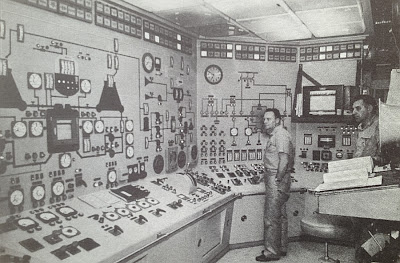 ﻿
Above, a view of the power plant control room located in the engine room of the NS Savannah.  This station is glassed-in; the panels you are seeing are on the after end, while windows (to the right of the camera) look out over the engine room (and the turbines we've seen earlier.)  The panel we see at extreme left is the reactor plant control panel, with diagrammatic depictions of the reactor at center, pressurizer above it, and two steam generators either side.  To the right end of the same section is the steam plant control, with large hydraulic throttle operator.  Specifications for the throttles called for a design opening or closing time for ahead throttle of at least 25 seconds and at least 14 seconds for the astern throttle.  This illustration comes from the official tour brochure for the NS Savannah, printed by States Marine Lines (original operator of the ship for MARAD) and a copy of which is in my collection.

By the way -- as some of you know, I've stood right where this photo was taken.  Years back I had the opportunity to do some work on the NS Savannah, and toured many normally off limits spaces with the then-curator of the Patriots Point Naval Museum.   I'm doing this particular feature this time for the Carnival because ... over 20 years later ... I will set foot again on this ship NEXT WEEK as part of the American Nuclear Society's Winter Meeting.  You'll see full coverage of that tour on the ANS Nuclear Cafe blog. 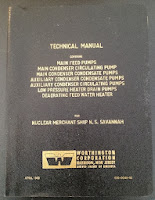 I've spent the intervening years thinking about the ship off and on.  I've collected quite a bit of material on the ship, both things that were in contemporary print (like both popular and public magazines) as well as trade paper items and even technical items.  At left - Technical Manual for all of the Savannah's engine room pumps, in my collection.  DeLaval Steam Turbine Company had design responsibility for the engine room equipment; all engine room pumps were supplied by Worthington Corporation.  This manual covers all of these pumps.  Item:  NS Savannah had an almost all-electric pump fit; only the main feed pumps were steam driven.  All others had electric drive (Electro-Dynamic Corporation.)


I really look forward to both a very active ANS Winter Meeting... and a very fantastic tour at the end of it that has historical tones, nostalgic tones, and implications for the future.  You'll see the full story at ANS Nuclear Cafe --- so don't miss it!