Atomic Power Review is proud to host the 150th edition of the Carnival of Nuclear Energy today; even though this Carnival falls on Easter, it's important to remember that those employed in the energy industry don't get holidays off -- your lights are probably on today -- and so in that spirit I made the clear decision to publish on Easter.

As is always the case here, there's a guessing game before we get to the Carnival entries.  So, I ask you -- What is This? 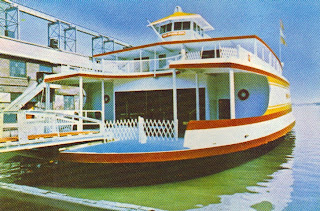 It's very colorful, isn't it?  And yes, it's floating.  (Click the picture to enlarge it.)  And, yes, this absolutely has to do with nuclear energy.  It's my hope that this will be among the easiest of these I've ever done, because I would imagine that if you'd EVER seen this thing in person or in photos, you wouldn't have forgotten what it was.  I'll give you the answer and some background after the Carnival - so let's get to it!


"Framing" is the way people use words and concepts to present their point of view in an understandable and appealing way. Meredith Angwin gives an example of nuclear opponent framing, and invites people to do some pro-nuclear framing. An excellent comment stream contains many frames that will be useful for all nuclear advocates.
At Yes Vermont Yankee, Specific Power Sources in Vermont - VTEP Report.
After the Vermont utilities contract with Vermont Yankee ended, the utilities made extensive purchases of "system power" from the grid, and power from Millstone and Seabrook. Residential electricity prices have gone up 5% in Vermont, though electricity prices have fallen in most of New England.
----------
Rod Adams
At Atomic Insights, Dieter Helm – Nuclear saga cannot go on (Leaders must push to a happy ending)

Nuclear energy offers a solid path to a sustainable future, but nuclear energy advocates and business leaders need to take action to solve the biggest hurdle inhibiting atomic abundance.
----------
Leslie Corrice
At Hiroshima Syndrome, "Where is the Water Going?"
There is little doubt that cooling water is leaking out of the (three damaged units') reactor systems and into the outer reactor buildings' basements, and from there to the attached turbine buildings' basements.  The question is the path of the outflows.  Evidence suggests it isn't coming from inside the primary containments, but rather from piping outside of them.
----------
ANS NUCLEAR CAFE - submitted by Paul Bowersox
"Nuclear Pulse Propulsion: Gateway to the Stars"

In the early 1980s Dr. Alvin Weinberg and a team of experts studied the
path forward for new nuclear builds after the Three Mile Island
accident. On the anniversary of the TMI accident, Will Davis clears up
some prevalent misconceptions about swings in public opinion before and
after the accident and asks, "How well did Weinberg's team predict
today's reactor designs?"
----------
Brian Wang (Next Big Future)
New nuclear reactors expected from 2013 to 2017
A new nuclear fusion microbomb propulsion design for a spaceship to Mars that would travel at 200,000 miles per hour. This would enable a travel time of about 2 weeks. Winterberg had microexplosion designs that were the basis for project Daedelus.
----------
Entreprenuclear Blog
Energy Abundance - The Moral High Ground
At Entreprenuclear, actually using energy is contrasted with the concept of "Negawatts", with 2 intended takeaways.
1. Using energy does not make you a bad person.
2. Avoidance of energy usage is not inherently morally superior to the numerous positive uses of energy.
----------
Gail Marcus
At Nuke Power Talk, Gail Marcus reports on a study in Japan comparing thyroid anomalies in children in the Fukushima area to thyroid anomalies in children elsewhere in Japan. Not surprisingly, they find no major differences, thus debunking previous concerns that effects were already showing up--something those of us in the field realized could not be true.
On a lighter note, Gail Marcus has another blog in Nuke Power Talk this week reporting that her book, "Nuclear Firsts: Milestones on the Road to Nuclear Power Development," was now selling for a few hundred dollars a copy on Amazon! Her first reaction was to buy out ANS's stock and resell the books herself, but she wrote a blog on what she had seen and got a very helpful response from Steve Skutnik reporting on how the robo-pricing works in the wonderful world of on-line sales.
----------
Things Worse Than Nuclear Power
"Battery State of the Art"
Did you know that the state-of-the-art battery installed for $44 million at the Notrees wind farm in Texas is of the lead-acid type?  Or that it can only supply electricity for 15 minutes?  And costs 134 cents per kwh?  Maybe ARRA should have funded modular nuclear instead.
----------
That's it for this week's Carnival entries.  All that's left now is to tell you what that Technicolor riot painted ...   thing ... was that you saw at the head of today's Carnival. 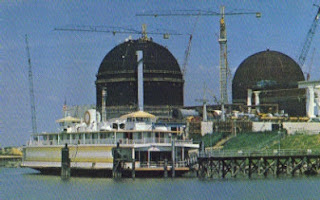 This is THE SECOND SUN, a converted near-turn-of-the-century ferry boat that was used as a floating nuclear energy information center for a number of years by the utilities building (among others) the Salem Nuclear Generating Station.  Above, we can see The Second Sun moored by Salem as the nuclear generating station was under construction in the 1970's.  (The colors should have given away the decade, roughly anyway!)
While the illustration above is from a post card, the first at the top was from a large brochure available at The Second Sun (or by mail) which was entitled, appropriately, "The Second Sun" and which detailed the history of energy.  In this brochure is the brief story of The Second Sun itself:
--
"The Salem Nuclear Generating Station's floating information center, The Second Sun, is a ferryboat which was launched in 1901.  It is a vessel that reflects a bygone era whose charm and fascination is now preserved.  During its years of transporting hundreds of thousands of passengers back and forth across the Hudson between Jersey City and New York, the Elizabeth, as it was then named, was owned and operated by the Jersey Central Railroad.  Public Service Electric and Gas Company purchased the vessel after its last run in 1967 and refurbished it.  It is now a novel and adventurous nuclear information center which can be conveniently moved from one city to another to bring the story of nuclear energy to people living in the four-state area of New Jersey, Pennsylvania, Delaware and Maryland.
The refurbishing of the old Elizabeth was a major undertaking, as any visitor to The Second Sun can see.  Tunnelways previously occupied by automobiles are now filled with fascinating exhibits of man's quest to harness nature's energy.  What was once a large deck area where passengers stood to see the Manhattan skyline, is now a colorfully appointed 140-seat theater which contains the most modern equipment for presenting an exciting audio-visual program (combining rear-screen motion picture and still projectors and stereophonic sound.)
Also on board The Second Sun is a large classroom area for special lectures to school groups and clubs.  The entire ferryboat is air conditioned.  The vessel's giant steam engine is still intact and ship enthusiasts may view it by special appointment.
Truly, the romance of a bygone era has joined hands with a new adventure of the future."
--
The Second Sun, as described above, included a wide number of displays covering the development of energy and its use over the decades, and included (as seen below) a model of the Salem Nuclear Generating Station.
As a postscript, I'll just add that The Second Sun did not immediately meet its end when PSE&G was through with it.  It became a floating restaurant for a time -- a Hooters of all things -- and then later sank at its pier.  Eventually, the ship was towed to sea and sunk as part of an artificial reef.