Over the weekend, Pilgrim Nuclear Power Station experienced what is referred to as a LOOP or Loss Of Offsite Power event and shut down.  Many people and websites have questioned the events and/or safety of the plant.  I'll describe what occurred,  and include NRC Event Reports to help detail the situation. 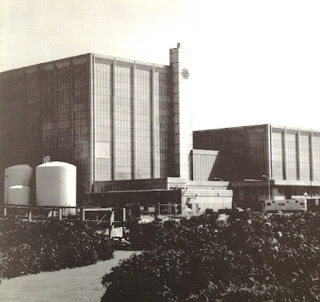 Above, illustration of Pilgrim Station from Boston Edison brochure "About Pilgrim," 4/81.  Pilgrim was ordered by Boston Edison in 1965.  The plant was designed and built by Bechtel Corporation; construction began in late 1967, with initial criticality June 16, 1972 and first electric power generated July 19, 1972.  The plant was declared commercial on December 9, 1972.


What actually happened was that storm-related damage to the electric distribution grid suddenly caused the plant to have nowhere to send the electric power it was generating, and of course get no outside power for any plant services to power anything. The result was a trip of the turbine generator, a reactor trip (scram) and shutdown of the plant. The EDG's or Emergency Diesel Generators started automatically to provide power.
Because of the LOOP event, the facility is required to declare "Notification Of Unusual Event."  This happened when the grid connection was lost; the situation was rectified, but then further storm related events caused the plant to lose power connection to the outside again and a second LOOP event occurred.

It's important to note that the shutdown of the plant went as designed, and that the reactor is safely in cold shutdown.  Time and again, this is the chain of events - even though the anti-nuclear web pages continue to predict disaster at U.S. nuclear plants related to weather, the plants consistently operate safely even in the very worst possible weather, including flooding, tornadoes, hurricanes and blizzards.  There have also been earthquakes.  Look here for a great history compiled by NEI showing some of the serious weather events that U.S. nuclear plants have made it through over the years.

Some people in the pro-nuclear world have asked if such a series of events that happened this weekend should be emphasized -- in other words, are they really newsworthy?  Until the public finally realizes that nuclear power plants have historically weathered every single major environmental catastrophe in the United States without serious incident, perhaps such events are news.  Eventually people will tire of getting all worked up over nothing and stop auguring disaster when severe weather events arrive.

How can they do that?  They can do that because of the incredibly competent people who operate, maintain, supervise and (via NRC) regulate the nuclear plants.  This is not to say that the public has no stake, and no say; it is to say that the level of hyberbolic concern is not justified.  Until that time, those of us who report on such things will have to keep reporting and communicating clearly, honestly, and frequently.

Below, for completeness, I'll reproduce the text of the two Event Notifications that are presently available from the NRC.  If you read through these, you'll see the actual events and times, and that the plant and staff have responded admirably.

UNUSUAL EVENT DECLARED DUE TO LOSS OF OFFSITE POWER

"Pilgrim Station scrammed on a loss of offsite power. All systems performed as designed. Groups I, II, VI went to completion. Reactor Core Isolation Cooling (RCIC) is injecting to the vessel controlling level. High Pressure Coolant Injection is in pressure control and slowly cooling down. Offsite power was lost multiple times. The Startup Transformer has been declared inoperable. The Unusual Event was declared under EAL SU 1.1 based on loss of offsite power greater than 15 minutes [at 2200 EST]."

The licensee originally experienced an automatic reactor scram at 2117 EST due to a load reject with a turbine trip/reactor scram due to loss of power. Offsite power availability has been fluctuating in and out to the site. The licensee states that all systems are functioning as required. All rods fully inserted and the reactor is stable in Mode 3. Both Emergency Diesel Generators are providing power to the safety related buses. The loss of offsite power is believed to be weather related.

The licensee has notified the State and local authorities and the NRC Resident Inspector.

Pilgrim terminated the Unusual Event and has transitioned to recovery effective at 10:55 AM on 02/10/2013. Offsite power has been restored to safety-related and non-safety-related electrical buses through the station Startup Transformer via a single 345 KV line. The other two offsite power sources remain out of service. The emergency diesel generators have been secured and are in standby. Residual heat removal is in shutdown cooling mode maintaining the reactor in cold shutdown. Fuel Pool Cooling is in service with fuel pool coolant temperatures trending down.

"On Sunday, February 10, 2013 at 1405 [EST], with the reactor at 0% core thermal power, all control rods fully inserted, and in cold shutdown conditions, the plant experienced a loss of off-site power. With Pilgrim Station aligned to off-site power via the start-up transformer (SUT), a fault on the 'B' phase of the SUT was experienced due to suspected falling ice striking the phase's insulator. This resulted in the tripping of the feeder breaker, ACB-102, and the loss of power to 4160 KV buses A1 through A4. Emergency Diesel Generators (EDGs) 'A' and 'B' auto-started as designed and are powering emergency buses.

"The loss of off-site power resulted in de-energization of both Reactor Protection System (RPS) channels resulting in a reactor scram signal and isolation of shutdown cooling. At 1418, shutdown cooling was returned to service. All other plant systems responded as designed. Station personnel are in the process of establishing back-up power in accordance with plant procedures.

"The following press release was made at 1715 hours: 'Offsite power to Pilgrim station was interrupted this afternoon. The plant is in a cold shutdown condition and Pilgrim's diesel generators are providing power to the site. There is no worker or public safety concern. Plant personnel are troubleshooting the cause of the interruption.'

"This event had no impact on the health and/or safety of the public.

"The NRC Senior Resident Inspector has been notified."

As always, you can keep up with the latest by following Atomic Power Review on Twitter - look for me there using the handle @atomicnews for updates on all things nuclear.