I find myself on this December 23rd, making the Atomic Power Review entry hosting the 136th Carnival, thinking about all of the great achievements the pro-nuclear communication world in general has made this last year -- and this includes not just the "loose cannon" nuclear bloggers and podcasters and Twitter stalwarts and Facebook posters, but utilities and PR departments practically industry wide.  While there's very much left to do, and a massive amount of work ahead, we who believe in nuclear energy have made tangible progress in our committed effort to spread fact instead of fear, and knowledge instead of supposition.

This feeling of some small measure of satisfaction at our progress has convinced me that benevolence should be applied to this Carnival's hallmark APR feature.  First... What is this? 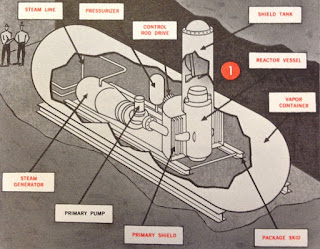 Normally, I'd ask for something really specific - and if you can tell me exactly what this is, that's fine.  However, acceptable answers this time will also include either who built it, or for whom it was built.  Or where it was built.  Let's hope someone gets this one!

The first Carnival entry this week is a sort of discretionary "Captain's choice" - the blog was not submitted for the Carnival, but I'm entering it at my choice.  Why?  Because the blog is absolutely brand new and covers a fascinating topic - Cyber Security.  Let's get behind Manolya and her brand new blog.

Manolya Rowe discusses the "Why, What, When and How" of designing nuclear security architecture.

Acid and Air, the Environmental Effects of Non-Nuclear Electricity

Yes Vermont Yankee posts a recent statement to the Vermont Public Service Board. Stuart Endsley describes the environmental effects of different types of power plants, from personal experience. Nuclear plants are the best for the environment.

Electricity Prices in the Northeast

Meredith Angwin has written an op-ed for Valley News, concerning the moderating effect nuclear plants are having on energy prices in the Northeast.

In the past couple of days, Rod Adams has been involved in a number of different conversations in which people who believe strongly that nuclear fission technology is beneficial also strongly counsel against the idea that nuclear energy advocates should emphasize that it is a wonderful tool to use in an effort to reduce carbon dioxide emissions. They choose a number of facts and pick at well known issues associated with climate models. They also point to the political and financial interests that stand to gain from carbon trading schemes or massive efforts to shift to “renewable” energy like wind and solar.


Continuing the battle against climate skeptics in the nuclear community

Ben Heard is one of the growing number of environmental professionals who have seriously evaluated all options for reducing mankind’s annual production rate of carbon dioxide and discovered that the best tool available is nuclear fission energy. As a part of his continuing journey of discovery, he worked with Brown and Pang to produce a report titled Zero Carbon Options: Seeking an Economic Mix for an Environmental Outcome”.

What to read about nuclear energy online

Dan Yurman with a list of free online news services essential for keeping current with developments in the nuclear industry and the news in nuclear -- and an excellent must-read nuclear book list. Do you have a favorite news source or best book on nuclear energy? Add suggestions in the comment thread.

When Black Friday comes: some thoughts on nuclear power and the end of the world

Canada’s nuclear regulator yesterday accepted a proposed
$14 billion decommissioning guarantee from the company that owns
Ontario’s nuclear reactors. No doubt critics of nuclear energy will
point out that the regulator, which is part of Canada’s federal
government, is just a patsy for the industry, thereby riffing on a
widespread pop culture notion of government complicity in all things
evil. Steve Aplin of Canadian Energy Issues points out that civilian
nuclear energy is actually a perfect villain in a lot of the silly
end-of-world scenarios we are hearing today.

At Nuke Power Talk, Gail Marcus reports on a very interesting study on
the consequences for the grid of a mix of different electricity
sources. While we have all discussed some of such consequences, this
article puts the issue in a broader perspective and explains the
importance to the grid of sources such as nuclear power.

As we all know, this month marks the 70th anniversary of the
demonstration of fission at CP-1 in Chicago, the event that launched
the nuclear power industry. Gail Marcus, who has written a book on the
history of some of the milestones of nuclear power, talks about the
importance of this, and other early events, at Nuke Power Talk.

India Kudankulam 1 will be delayed into January and Russia indicates costs for Kudankulam 3 and 4 could double if India's new nuclear liability law is applied. Japan is looking to allow new nuclear construction and reconsiders nuclear phaseout.

Although I don't normally submit an APR post for the Carnival when APR hosts the Carnival, we do have an important post this week about a very widely discussed topic.  Some time back, defects were found in the pressure vessel at Doel - 3 in Belgium, and a world-wide flap ensued.  There is new information about this entire affair, along with the announcement of a restart plan for Doel 3 and Tihange 2.  You can see that information at the link:

That does it for this week's Carnival.  All that's left is to tell you what you saw in the "What is this?" photo.

The illustration comes from a six-page ALCO Products insert found in a 1959 Nucleonics magazine, and depicts the configuration of the APPR-1a nuclear power plant, built at Fort Greeley, Alaska.  This plant, later and perhaps better known as the PM-1a, was what we would today call an SMR or Small Modular Reactor plant.

Below, from the same page of the insert, is an overall view (with legend) of the installation.  As with all photos on APR, click to enlarge. 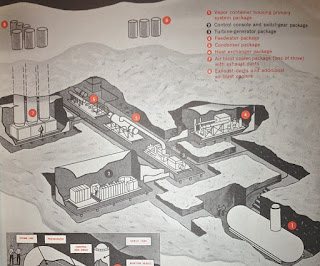 At the time this advertisement appeared, ALCO was still working with Peter Kiewit Sons, who was the prime contractor and A/E for the plant, to complete construction which was expected to be finished the following year.  The plant included a pressurized water reactor rated 20 MWt, and the plant had a dual output of 1.68 MWe and 10 MWt space heat for the installation.

It's of interest that these early plants weren't just truck transportable -- some were AIR transportable.  From the caption to our original photo:  "First truly packaged plant was purchased from ALCO by the U.S. Army.  Reactor and component design and manufacture represent significant achievements in reaching Army's goal of air transportability to faraway sites." 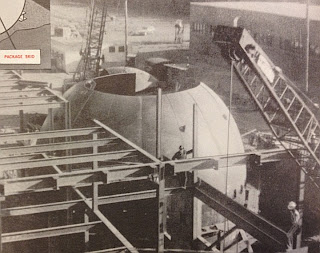 Above:  "Under construction in Alaska is descendant of APPR-1.  ALCO is building primary system under subcontract.  ALCO components in the plant have been greatly improved as a result of prior plant experience."

You can see details of another remote nuclear powered installation, Camp Century in Greenland, which was also powered by an ALCO built reactor at the APR YouTube Channel - click here to watch this video, which runs half an hour and covers more of the siting and construction aspects of the site than powerplant aspects but is worth watching nevertheless to see just what environments the Army and the AEC were facing with deployment of early plants we'd now call SMR's.

I hope you've enjoyed the 136th Carnival - and look for another installation next week!