Not too long ago, Atomic Power Review was a media partner for an Infocast symposium in Washington D.C. on commercializing Small Modular Reactor (SMR) plants.  At that time, Jud Simmons of B&W asked if I would like to interview Matt Miles about the B&W effort in this field, which (jointly with Bechtel) is marketed by Generation mPower.  I said "yes," but since I was not attending the event directly worked out the details to conduct an interview with Mr. Miles via e-mail.

The mPower is an integral PWR rated 180 MWe for each reactor, and which can be built either as a single unit or in multiples in one plant site.  Right now, B&W seems to have two offers on the table for construction of mPower units; one with TVA at the Clinch River site, and another more generally with FirstEnergy.  (Links to previous APR entries on these deals.) 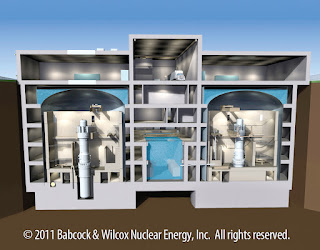 Above, we see an illustration from Babcock & Wilcox displaying a two-reactor mPower installation of 360 MWe.  (Click to enlarge, as with all photos on this site.)  The size of the equipment can be judged by comparison with the semi truck in the upper center of the facility.  One of the major positive features of SMR reactors is that they are much more easily transported to a site for installation, perhaps opening up many sites for nuclear energy not previously considered because of lack of barge and/or rail access.  (All illustrations this page courtesy Babcock & Wilcox.)

Below, my interview questions for Matt Miles of B&W and his responses.

How long ago did Babcock & Wilcox make the decision to re-enter the market as a reactor vendor with an SMR design?


B&W started working on this about four years ago, and the program publicly launched in June 2009.

What if any design heritage from previous B&W reactor plant projects is incorporated in the Generation mPower?

The B&W mPower™ reactor is a 180 MWe integral Pressurized Water Reactor (iPWR) that finds its beginnings with the prototype we built in 1968 for the Otto Haan merchant vessel. The reactor remained operational until 1979. Over the operating life of the reactor, the ship sailed approximately 250,000 nautical miles. It successfully demonstrated that surface ship propulsion using nuclear power was a viable option.

What does B&W see as the potential US market for the mPower reactor in terms of a realistic number of units sold within 20 years?

Our market projections for number of units we expect to deploy going forward is not something we share with the public. That said, we believe there is a solid market for our SMR both domestically and abroad. One way to assess the interest in our SMR is to consider the makeup of our Industry Advisory Council, which now has almost 30 member utilities in the US, Canada and Europe. This group provides expert review, insights and feedback regarding licensing and design activities for the B&W mPower reactor. The input that has been received from the member utilities has been instrumental in guiding the B&W mPower reactor design and testing work that has already been completed.

And in a similar fashion, what might the export market in the same time period be?

Does B&W expect a larger number of sales of the mPower as a fairly large multi-reactor power plant, or is it expected that either single or double reactor units might be more likely in remote "off grid" locations or military application as the major seller?

In talking to potential customers, we think the most likely scenario is that a customer will initially deploy what we call a “twin-pack,” which is two reactor modules producing a total of 360MWe. At a later time, as their power generation needs increased, they would be able to scale up their capacity and add additional units.

There seem to be a number of features of the mPower-based plant that would make a multiple-reactor mPower installation directly competitive with large single-reactor commercial nuclear power plants such as the Westinghouse AP1000, the Korean APR1400 and the Mitsubishi US-APWR as examples - not the least of which is a much shorter lead time. Does Babcock & Wilcox intend to directly compete in the large commercial plant market with multiple-reactor mPower installations, or is the target for smaller and more variable system load scenarios?

We believe that customers who need gigawatt-scale generation capacity will likely pursue that option if they can handle the financing that is required for such a project. While several B&W mPower reactors could produce that load, we believe our solution will appeal to customers who need less power generation early on, but who may want to scale up as time goes on.

Speaking of system load, what are the load following characteristics of the mPower as it is envisioned now? Will the mPower be a good load follower for totally off-grid operation?

Traditionally nuclear power plants have been used for base-load generation. Our plants are designed for more segmented or off-grid applications and are capable of load following to accommodate this type of deployment.

Is B&W open to designing mPower plants which supply not only electricity but process steam for industrial use or for heat?

Yes. We don’t see that need as much in the U.S., but abroad there is definitely interest in process steam for heat as well as desalinization.

Recently, at the ANS Annual Meeting, a speaker from the Shaw Group indicated a great future potential for SMR plants around the world - and it seems that everyone who can design an SMR is now either in the field or designing like crazy to get into it. Is the mPower in a position to be the first to fill orders? How long will it be before one can expect a unit to be built if it were ordered right now?

We are positioning ourselves to be the first to deploy an SMR, and we expect to do so by 2022 at our Clinch River launch project. There are many variables that would influence the exact timeline if an order were placed today, including major licensing, manufacturing and construction considerations.

Finally, maybe you could briefly tell us about the range of people you have working on this project; what is the range of their backgrounds, their experiences? What about their enthusiasm for the project?

We have hundreds of people working on this project. As you would expect, many of them are engineers and designers. We have technicians who are conducting tests at our Integrated System Test facility in Virginia and engineers who are developing the technologies necessary to make the fuel for B&W mPower reactors. I would say their level of enthusiasm is high because they recognize that they are on the ground floor of a revolution in the nuclear industry, and they are working on it in a very tangible way every day. 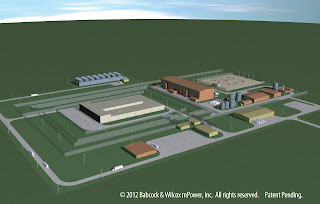 Above is a great illustration from Babcock & Wilcox showing a completed Generation mPower nuclear power plant.  The large structure in the left-center is the Reactor Service Building; two mPower reactors are situated completely below ground level (see first illustration this page) abreast each other at the near end.  The taller reddish building houses the turbine generators; the switchyard is beyond it.  At the top of the illustration, cooling towers can be seen.  For technical information, click here and for more detailed information, click here.  This photo opens very large when clicked, and I've found that it makes good laptop wallpaper!

Babcock & Wilcox has furnished a bio of Matt Miles which I reproduce below:

Matt Miles is the Director of International Business Development of Generation mPower LLC, a joint company formed by The Babcock & Wilcox Company (B&W) and Bechtel Corporation to design, license and build the next generation of nuclear power plants based on B&W mPower small modular reactor technology.

Before joining Generation mPower in 2012, Mr. Miles was Senior Market Manager of Global Nuclear Markets for the Edgen Murray Corporation.  In that role, he was responsible for the development and ASME accreditation of the Nuclear Supply division, and its overall globalization strategy.  Mr. Miles also led the Nuclear Quality Assurance Audit program as lead auditor.

Prior to that position, Mr. Miles was the Business Development Manager for fossil power and refining markets in the Mid-Atlantic & Southeastern U.S. regions for the company.

Mr. Miles began his career in the energy sector in production operations as a Lead Field Operator in the offshore oil fields in the Gulf of Mexico.

Matt has served on the Nuclear Energy Institute's Supplier Standing Committee, and has participated as a panelist for the Electric Power Research Institute's Joint Utility Task Group.  He is also an active member of the American Nuclear Society.

I very much appreciate the opportunity to ask Mr. Miles these questions - even if not in person - and I hope that the information and illustrations here, along with the links, will help APR's readers obtain a full view of the real scope and intent of the Generation mPower program.  It's my belief that SMR plants are on the way without doubt - it's only a matter of who gets to the ribbon first.  It looks like the mPower has a good chance of beating the crowd.

Thanks to Jud Simmons of Babcock &Wilcox for making this all possible, and also thanks to Aimee Mills of B&W for providing the mPower illustrations.