Atomic Power Review is proud to again host the rotating Carnival of Nuclear Bloggers - a feature that week in, week out showcases the very best of the pro-nuclear blogging world. I've said many times that following this feature around the blogs is the best way to find out what is really on the top of the nuclear energy world's mind and that holds true this week as well.

We all know by now that access to the Carnival entries whenever this event takes place on APR is blocked by some sort of obscure image from the APR vault, which you're asked to identify later on. So let's get to it! Hint: The plant to which this piece of equipment relates was in the news this month, although not incredibly widely. So... What is this? 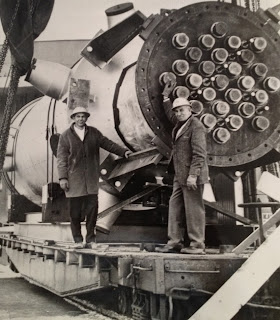 Meredith submits two entries this week - one at Yes Vermont Yankee and one at the ANS Nuclear Cafe blog.

San Onofre Generating Station (SONGS) installed new steam generators, and the generators have serious problems. Arnie Gundersen has been hired by Friends of the Earth to write reports (pessimistic of course) on the extent of those problems. On radio in California,Gundersen asserted that he isn't an anti-nuclear activist because he signed a report approving of continued operation of Vermont Yankee. Gundersen as a Vermont Yankee supporter came as a surprise to Meredith Angwin of Yes Vermont Yankee.

At ANS Nuclear Cafe, Meredith Angwin describes a recent meeting of the Vermont State Nuclear Advisory Panel. The panel's main topic was nuclear safety, despite the fact that a recent lawsuit re-affirmed that the state has no jurisdiction over nuclear safety. It was deja vu all over again.

The Diet’s NAIIC report’s executive summary seems largely spot-on, drawing only a few questionable conclusions (e.g. keeping the earthquake-as-cause notion open). However, one serious mistake cries out to be exposed. Concerning the IC condenser stoppage on unit #1, the report calls Tepco's actions "irrational". The F. Daiichi unit #1staff’s actions and Tepco’s explanations were entirely correct. On the other hand, questioning the actions of the staff and calling Tepco’s explanations irrational is an exercise in ignorance.

Gail Marcus, writing at Nuke Power Talk, praises a publication by Japan Atomic Industrial Forum (JAIF) President Takuya Hattori urging the Japanese government to conduct the decommissioning of the damaged Fukushima units openly, transparently, and with international involvement. His comments come amidst concern that the Japanese government may be exhibiting reluctance to work together with the international community on this critical effort. Among other points Hattori-san makes are that the effort will benefit from the united wisdom of the world, and the world will benefit from the shared knowledge to be gained. His specific proposals call for a platform for international R&D and an international decommissioning research center to be established.

Race for SMR money heats up

The race for DOE's $452 million in SMR money heats up in Ohio. B&W inks MOU with First Energy for economic, siting, and licensing studies.

Brian this week has submitted a number of interesting articles on reactor restarts or first startups.

South Korea's Shin Kori 2 has begun commercial operation, Canada Bruce A Unit 1 has been permitted to restart, US nuclear uprate status and Russia And Belurus sign a $10 billion deal for new nuclear reactors.

It appears that China is in the lead to build the new nuclear reactors in the UK.

Eric McErlain sends along a number of submissions from NEI Nuclear Notes this week covering a range of topics.

Westinghouse SVP Dan Lipman talks to the Global America Business Institute about the growing relationship between the two nations in civilian nuclear energy.

Brad Plumer of the Washington Post tried to find something sinister in nuclear plant uprates, but NEI's Mark Flanagan snuffs him out.

In April 2011, the Worldwatch Institute predicted a rocky future for nuclear energy, but the most recent report from the OECD shows the predicited slowdown never occurred.

After a conversation with a colleague who is also a qualified lead NQA auditor, Margaret Harding muses about the idea of updating the quality regulations to a more modern approach that acknowledge other industry standards as opposed to the “go it alone” approach that the NRC takes today.

"Climate Change and Nuclear Energy: We Need to Talk"

Nuclear power advocate Suzy Hobbs Baker speaks out on behalf of the threatened biosystems in the earth's acidifying oceans, and the people who are bearing the brunt of intensifying global climate change -- and in favor of the nuclear community emphasizing the essential role of nuclear technologies in reducing greenhouse gas emissions.

Rod Adams has entries from Atomic Insights and The Atomic Show:

Last week, Professor Mark Z. Jacobson, a professor of civil and environmental engineering at Stanford University, stepped way outside of his area of expertise by publishing a paper titled Worldwide health effects of the Fukushima Daiichi nuclear accident that claimed to quantify the number of cancers that may be caused by the radioactive material released by the Fukushima nuclear reactor plant core damage events. He is a respected atmospheric modeler who has specialized in creating multi variable modeles for the dispersal of particulate matter, but he has little or no background in radiation biology or in studying the health effects of radiation.

The Atomic Show #185 – Is Thorium Superior to Uranium?

On July 23, 2012, Rod Adams talked with Richard Martin, the author of SuperFuel: Thorium, the Green Energy Source for the Future and Kirk Sorensen, the co-founder and chief technology officer of Flibe Energy, a start-up company formed to “develop small modular reactors based on liquid-fluoride thorium reactor (LFTR) technology.” Kirk is also the founder of Energy from Thorium.

That's it for this week's entries. I would like to note again the wide range of topical material covered this week - from rad health issues, to alternative reactor technologies, to startups of both brand new and shut down plants and more. There's even a provocative piece on global warming and how that relates to nuclear energy advocacy. It's probably not possible to get such a wide range of realistic views on energy generation and related issues every week anywhere else.

And NO, we didn't forget -- the photo! This photo is a February 1965 AP Wirephoto depicting the delivery of the reactor pressure vessel to Dairyland Power Co-Op's Genoa No. 2 plant, perhaps better known in nuclear energy circles as the LaCrosse Boiling Water Reactor. This was the last Allis-Chalmers nuclear plant to remain in operation (there were only three - Elk River, which really was started by ACF Nuclear; Pathfinder, one of only two nuclear superheat BWR's; and LaCrosse.) Here is the caption from the photo:

This plant was recently in the news because the owners have finally begun moving spent fuel from the spent fuel pool inside the reactor building to new storage on site but outside the plant; a move anticipated for many years. Here are some links:

The plant was officially rated at 155 MWt, 60 MWe gross and 50 MWe net. It was ordered under the AEC's demonstration program in the second round as an "Improved Cycle BWR." The plant had forced circulation, operated on the direct cycle with a single-pass single-zone (all identical fuel load) core.

The plant contracts between the AEC, Dairyland Power and Allis-Chalmers were signed in 1962, with a planned initial criticality of late 1965 but which had been postponed until August 1966 within a short time, and subsequent scheduled full power operation in November 1966. However, the plant did not achieve initial criticality until July 11, 1967 and first generated power on April 26, 1968.

Many problems were encountered during the years 1968 and 1969, and for the first third of 1970 so that the plant did not begin to generate significant amounts of electricity for the grid until around May of 1970. In contrast, above linked articles indicate that plant operators thought the design good and in later years the plant was quite reliable.

In case you're wondering, the reactor vessel shown in the photo earlier had an inside diameter of 8 feet 3 inches and was 37 feet tall. The vessel itself was 4 inches thick with an internal cladding of stainless steel .188 inches thick.

Finally we'll show a couple photos of the plant that long time readers of APR have seen before, but which I'll include for completeness. The first is a photo of the LaCrosse BWR plant (Dairyland Power Co-Op No. 2) under construction in May, 1964. 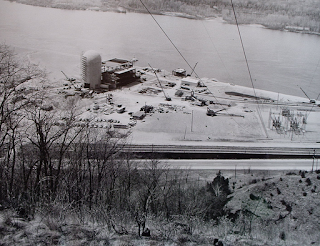 The last shot is a post card view of the completed plant as it appeared for many years; next to it is the larger Genoa No. 3 fossil fired plant. 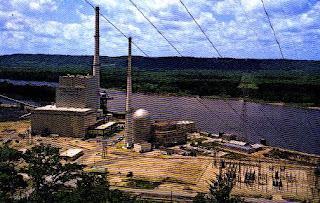 That's it for Carnival 115! We all hope you've enjoyed the ride.