The Navy's Kesselring Site NNPTU has hit a significant milestone; it has graduated its 50,000th student. A number of reports are out on this in national and local levels.

Coverage at The Saratogian.

Hudson Valley / Your News Now report with video and interview of 50,000th sailor.

The Kesselring Site is one of two prototype sites at which Navy personnel receive hands-on training in nuclear power. The other is located in Charleston, South Carolina. There used to be two more, which are closed down; the NRTS Navy facility in Idaho, and another site in Windsor, Connecticut.

The Kesselring Site was constructed in the mid-1950's to allow the full scale testing of the SIR (Submarine Intermediate Reactor) prototype plant which was being designed by the Knolls Atomic Power Laboratory for the Navy. General Electric operated the Knolls Atomic Power Laboratory for the AEC for the purpose of designing Naval power plants; the SIR project stemmed from a redirection of what had originally been a plan for a civilian liquid metal cooled breeder reactor, whose progress and funding became uncertain. According to testimony by Admiral Rickover (given some years later in 1957), the project was changed over to being a Navy project exclusively in order to ensure that funding continued. The SIR, later known as S1G reactor first achieved criticality on March 20, 1955; the plant generated its first useful power on May 18, 1955. In order to obtain the maximum press benefit from the startup of the plant, GE and the AEC staged a press event and on July 18, 1955 actually used the plant's generating equipment to sell power back to the commercial provider, thus claiming the first commercial sale of power generated by a nuclear plant at that time. (I have made a list of "nuclear firsts" from the 50's and it's incredible how every turn brings another claim of "first.")

In the reports above a massive spherical containment can be seen. This is the containment built for the S1G originally and is the largest spherical nuclear power plant containment vessel ever constructed anywhere. This sphere is 225 feet in diameter, and is thus larger than those built for Dresden 1, Garigliano (Italy), Yankee Rowe or any other. Below we see, from APR's collection, a January 1954 United Press photo, with original caption below, showing the sphere under construction with some detail airbrushed in. 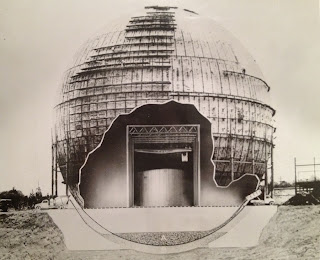 ----"ATOM ROUND-HOUSE" ... Schenectady, N.Y.: This giant steel sphere, which has a diameter of 225 feet, has been built by the Atomic Energy Commission to house its new atomic submarine reactor. The unique job of anchoring the 3,850 ton ball is now being completed by the Rust Engineering Company of Pittsburgh. Built over its foundation and supported by a ring of steel columns, the sphere posed the engineering problem of how to secure it in place without developing stresses that would break or distort its 1-inch skin. The engineering company solved it by alternately pouring a three-foot layer of limestone inside one day, and a three-foot layer of concrete outside the next, until the huge ball was secured. The figure shows trucks laying the limestone (A) and the concrete (B). The limestone is being poured to a height of some 38 feet to provide ballast and floor space. The shadowy structure inside the globe is an imaginary conception of the atomic reactor. It will be a prototype of the reactor planned for use in the Navy's new atomic submarine, the "Sea Wolf." The prototype of the engine used in the Nautilus, now under construction, is now under test at Arco, Idaho.----

The working part of the prototype, namely the hull section and a submergence tank, was shown quite clearly in the contemporary film "The Atom Goes To Sea" produced by General Electric. In that film, the structure is shown being "launched" by being moved from outside the sphere, where it was constructed, to the inside. (This film is widely available now on a number of DVD's.) Below, an illustration from the unclassified advertising / PR booklet titled "Knolls Atomic Power Laboratory" published by General Electric ca. 1958. 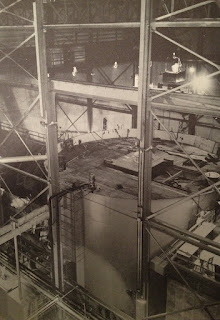 The caption for the above photo is as follows: "Hull and submergence tank for the SIR prototype were installed in the West Milton sphere." Note- while numerous photos of the interior of the Westinghouse / Bettis Atomic Power Laboratory STR (later S1W) prototype received fairly wide distribution by wire at the time, photos either inside or outside SIR / S1G were far less well distributed due to GE's essentially playing catch-up with this plant... Westinghouse being first got it all the glory.

This author is a graduate of the Naval Nuclear Power Training Unit, Ballston Spa, New York which trained at the Kesselring Site. That was some years back; at that time, Nuclear Field "A" schools and the Naval Nuclear Power School were entirely in Orlando, Florida, with prototype training sites in New York, Idaho, and Connecticut (the South Carolina facility was only being begun then.)

APR congratulates everyone at the site - these proud men and women constantly, tirelessly perform jobs that no one really ever gets to hear or know about until milestones like that reached with the 50,000th graduate come to light.