Atomic Power Review is proud to present the 106th Carnival of Nuclear Bloggers - a weekly feature that rotates between a number of the best pro-nuclear blogs in the English-language blogosphere. This feature has become well known in pro-nuclear circles as the best weekly location to get a finger on the pulse of the nuclear energy world.

APR Note: This week was to have been hosted at NEI Nuclear Notes, but due to a last minute problem APR has picked it up. This will explain any confusion folks may have when looking for the Carnival over at NEI's well known site.

Even though it's short notice, there's no way I'm going to let you in to the Carnival without showing you some completely obscure piece of equipment and asking you to tell me what it is - hoping all the while that you do NOT skim to the bottom of the post in order to find out what it is before you've perused the Carnival entries. We consider that cheating around here. So, then, I ask you... "What is this?" 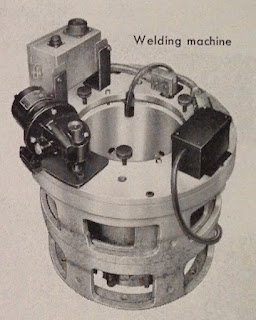 Dr. Allison Macfarlane, an associate professor at George Mason University, with a PhD in Geology from MIT, has been nominated by President Obama to be both a Commissioner and the new Chairman of the U. S. Nuclear Regulatory Agency. If the President does not change his mind, that decision alone will be enough to turn me into a fervent supporter of anyone BUT Obama. If the Senate confirms Dr. Macfarlane for the increasingly important post, it will be enough to make me start investigating ways to become a citizen of another country.

A closer look at Jaczko's replacement

With the sudden departure of NRC Chairman Gregory Jaczko and President Obama's rapid nomination of Allison MacFarlane to fill the role, what does this mean for the NRC (and the nuclear industry writ large)? Ultimately, it's a mixed bag.

Tokyo shoots itself in the foot again!
(See May 25th entry)

As if Tokyo's government hasn't got enough public image problems, now they attack the findings of the World Health Organization on their estimates of the radiological impact of the F. Daiichi accident releases. What's mind boggling is WHO used the data supplied to them by Tokyo last September! So what if WHO crunched the numbers differently?

Over ten short years from the early 1970s to the early 80s, Ontario became the most nuclearized jurisdiction in North America. During that period, Ontario was the proving ground for a unique reactor technology, CANDU, based on natural, unenriched,
uranium fuel and heavy water moderator, arranged in horizontal individual pressure tubes, thereby eliminating the need for large cast pressure vessels. CANDU quickly became Ontario's biggest energy source, out-generating all other sources combined. This domestic success was the springboard for international sales. CANDU construction projects in South Korea, China, and Rumania set the standard for multi-unit stations, based on proven designs, built on time and on budget. Steve Aplin argues that this amazing and unsung achievement is on the verge of being repeated, and all because painful but important management lessons from previous projects have been taken into account.

Too Cheap to Meter: 2

At Nuke Power Talk, Gail Marcus follows up on her last blog on the history of the "Too Cheap to Meter" statement with further reflection on whether it is possible or desirable to have electricity that is too cheap to meter. Gail's second post was in response to numerous comments, some pointing to times and places where electricity has not been metered, or to a future where the marginal cost of electricity might be so low that metering it would cost more. She wonders, though, if people might approach electricity consumption as they do an all-you-can-eat buffet table!

The resignation announcement of US Nuclear Regulatory Commission Chairman Gregory Jaczko earlier this week jolted the nuclear power industry and the ever-tumultuous political world of Washington, DC. Paul Bowersox at the ANS Nuclear Cafe lays out the reactions to the resignation and makes a foray into the popular Beltway pastime of "reading the tea leaves" regarding Chairman Jaczko's eventual successor at the NRC.

What advice would you give Allison Macfarlane?

At Idaho Samizdat, Dan Yurman asks readers to provide answers to the question of what they expect from the NRC Chairman's office.

Assume for the sake of discussion you are an adviser hired independently by Allison MacFarlane to provide unvarnished advice on how to succeed on the job assuming she is confirmed as Chairman of the U.S. Nuclear Regulatory Commission.

Two articles this time from Brian;

There was a 19 page report that claims that a billion people who are undernourished would die if there was a nuclear war between India and Pakistan. This is based on a series of wrong assumptions. Starting with the beginning that nuclear bombs would set off firestorms in Indian and Pakistan cities the way one was set off in Hiroshima. Nagasaki did not have a firestorm. Hiroshima did not have rain for 27 days prior to its bombing and they had paper and wood buildings and a high builtup coverage of land and breakfast cookers. India and Pakistan have mostly burnt brick buildings that are not as flammable. No big city fires then almost no material getting into the Stratosphere. Therefore no temperature effect. The other assumptions are also wrong. There was a temperature drop after Mount Pinotubo with 30 million tons of aerosol in the Stratosphere which had temperature effect for about two years but no impact on agriculture or starvation. There is no need to make stuff up. A full exchange of nuclear weapons between India and Pakistan would kill about 20-50 million people and injure many more. There is no need for some weird fairy tales about climate effect and then starvation.

That does it for this week's Carnival entries. As we can see, a vast majority of people have been discussing Chairman Jaczko's announcement of intent to resign when a replacement is confirmed; right in step with that is discussion surrounding the nominee to replace him, Allison Macfarlane. This story is not going to go away; I'd recommend reading up on it using all the links above so that you're not left behind as the story develops.

And now... what was that machine I showed you? That machine is a specially designed seal welding machine for use on Navy reactor plants.. although, it was for Navy reactor plants of long ago. This illustration comes from a 1959 advertisement. Here is the text next to the photo, which I did not show you:

"The design and development of automatic seal welding and cutting equipment for nuclear reactors is an important activity at United. One such development involved the design and manufacture of cutting and welding equipment using consumable inserts for the U.S. Navy submarine Triton (S4G). Equipment will cut and re-weld 11 inch diameter welds on the control rod drive mechanisms at various angles. A control unit provides automatic sequencing of welding operations and the design of the welding unit allows use in spaces as close as 1-3/4 inches from weld to adjacent mechanisms. Equipment can be operated with any or all control rod drive mechanisms in place and its reliability eliminates the necessity for radiographic inspection."

Below we see the other unit mentioned (one for welding the seals shown earlier; the one below is for cutting them.) 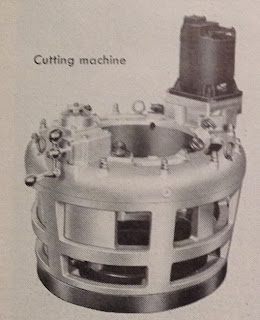 The manufacturer name was hinted at in the text - "United." This slightly improbable contributor to the early nuclear energy industry was the United Shoe Machinery Corporation, which had an Atomic Power Department that manufactured, for the AEC, various control rod drive mechanisms and auxiliaries as shown above. Below, United Shoe Machinery's factory with logo.

The above illustrations and text are from Nucleonics, May, 1959. But such trade magazines aren't the only mention of the United Shoe Machinery Corporation in APR's collection -- in fact, Admiral Rickover himself mentioned this company while making a presentation to the Joint Committee on Atomic Energy in March, 1957.

Admiral Rickover was describing new reactor plant designs for Naval use to the JCAE and showing various models of equipment as displays during the first session of testimony and questioning. In the midst of showing these models, the following brief exchange took place:

Adm. Rickover: "Here is a sample of the control drive mechanism for the radar picket submarine. It is being designed by the United Shoe Machinery Corp., of Beverly, Massachusetts."

Representative Durham: "Is the shoe man in this business too?"

Senator Jackson: "The Russians will have a terrible time trying to figure out just what the American corporations are doing if they just read the stock lists and try to make a decision."

Adm. Rickover: "That is right. We have companies such as Borg-Warner, Bendix and Aerojet making controls. We have all kinds of companies in our business."

So, while at first take a shoe manufacturer might seem the most unlikely contributor to primary reactor plant equipment, in fact when manufacturing capability was compared to need (or potential need) companies such as this came right to the top, and were probably only too glad to take contracts for what appeared at the time to be a limitless future market.

That's it for this 106th Carnival. I hope you've enjoyed it, and I look forward to next week's installment. Thanks to all of the contributors for all their effort.