There is very little actual news to report yet; the NRC Chairman has toured the plant, and a brief report of this trip is available on the NRC's blog. Click here to read that report.

Far more interesting is the fact that apparently SoCal Ed has awakened to the need for direct approach to the public and the website I've just found which is attached to the SoCal Ed site for SONGS (San Onofre Nuclear Generating Station) is proof. The website is actually pretty impressive; it's located at "songscommunity dot com" and the entry page is found by clicking here.

Of great interest is this page, which is called "Just the Facts." This tells why this new website has appeared, gives some answers to questions and really drives home some of the real answers to questions commonly asked by those who don't know much about nuclear energy.. and as a result, it also squashes mistruths told by anti-nuclear opponents. This page is a good playbook, if you ask me. It's accurate, fair, not too heavily loaded and probably exactly what SONGS and SoCal Ed need right now.

Not only is there a great deal of information available about plant work in progress (specifically pdf files describing steam generators) there's also a plant status box which will show status in real time. There's even a link to a version of the site in Spanish, which is a great touch.

This site, when combined with the original site (see link here) about SONGS makes the web presence for SONGS move up toward the top ranks. I am fairly well impressed by the new site and am glad to see how well it's done. I suggest everyone interested in pro-nuclear outreach give the new site a look.

San Onofre 2 and 3 - the plants shut down now with steam generator problems - are Combustion Engineering PWR plants. San Onofre 1 was a Westinghouse PWR which operated for many years beginning in 1968. This plant is now totally gone, at least to the naked eye; see here. This link has an interesting photo showing San Onofre 1 in process of demolition. Here are two early photos of San Onofre 1 from APR's files. 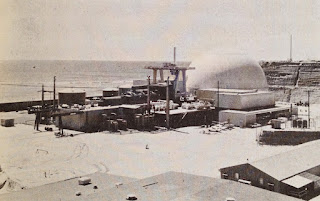 The photo above is from WASH-1082, published in March 1968 and shows San Onofre 1 in the final stages of construction and testing - at least, it would appear so by the completeness of the plant but presence of many work vehicles around. 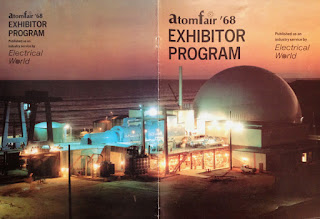 Above is an impressive night photo of San Onofre 1 from the cover (fully open, showing front and back) from the AtomFair '68 Exhibitor Program in the APR collection. Both photos enlarge when clicked.

(APR also as of this time has new photo editing software - readers should notice an increase in photo quality even over previous versions.)

UPDATE: Af of Friday morning, there are reports from SoCal Ed that both plants are exhibiting the same kind of wear in their steam generator U-tubes, and that more damage has been found in tubes at No. 2 plant. A number of articles are out this morning; click here to read one. More details later as they're found.
Posted by Will Davis at 9:18 PM