Tonight I'm very pleased to announce the launch of four new recurring features on APR. These features will help the pro-nuclear community, I feel, in a big way.

Our fundamental problem is a lack of backstory. This omission of things nuclear from wide print for thirty to forty years is probably mostly the fault of the same "pro-environment" crowd that passed the NEPA, forced the dissolution of the AEC, and the dissolution of the JCAE. Prior to that time nuclear power technology wasn't quite front and center in America's press, but it wasn't left out or, worse, left to anti-nuclear hack writers either.

Some of you already know that I have the material and the knowledge to fill much of this historical gap, and this new project is the real launch of my attempt to do just that. Four different topical features will be presented, fairly regularly (probably every other week) which will both tell the history of nuclear technology and give a real sense of how things were back when nuclear energy was new and in development. Let's just briefly mention and describe these four topically oriented features.

Thanks both to my collection of material, and to the acquisition of a large collection of papers from the late Jim Vadeboncoeur, much of the inside story of the development of the nuclear business can now be told - from an inside perspective in many cases. Much of this material focuses on the biggest early Westinghouse commercial project, the Shippingport Atomic Power Station. Not only do I have detailed PWR (Shippingport) technical and operating information, but I also have a complete press release package (hundreds of pages) as well as a great deal of the late Vadeboncoeur's inside information about setting up and managing the fuel fabrication business as Westinghouse.

This long out of print, long abandoned and long forgotten program was actually a study at home introduction to Nuclear Engineering... but one that dates from the early years (about 1962) of commercial nuclear energy. We'll look through the nearly complete set of study manuals and examine how nuclear power 'worked' in many ways back then. Sure to be an amusing comparison to today's equipment and methods. And, by the way, I actually did get some training in vacuum tube equipment during my nuclear education, so I know more of what's in these volumes than you might think! Below, the cover of one of the set and its great "CREI Atomics" logo. 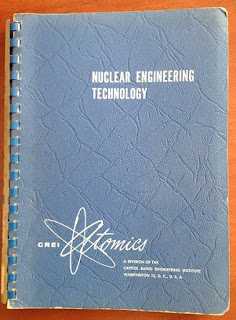 The late Jim Vadeboncoeur, whose massive collection of original papers is now in my hands, left Westinghouse to work for Sylvania-Corning Nuclear during the critical period when many reactor projects, whether training reactors, test reactors, or power reactors, were being made and then cancelled so fast it was hard for anyone to keep up - much less construct a workable business manufacturing and selling fuel. Sylvania-Corning was right in the mix of it, and large amounts of technical data from this company help tell the story of what it felt was 'right' for general sales - and tell how the company was very wrong. Further, Jim moved out to open a Western sales office when Syl-Cor (as the company's name is normally abbreviated) really tried to go big time and the story of that brief interlude is a fascinating inside story of the fuel fabrication end of nuclear energy in the early days. Below, a pile of Syl-Cor technical manuals along with a pile of Vadeboncoeur's business records, corporate correspondence, and other varied documents. 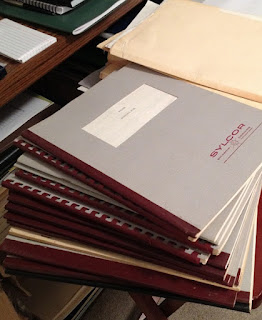 A large pile of information exists containing widely scattered topics on early nuclear energy. Both materials from my collection and from Vadeboncoeur's papers will tell brief, spot stories of some of the early nuclear projects, whether they be test or training reactors, power reactors, or even other topics not reactor related but nuclear related nonetheless. Below, the cover of just one of many, many interesting volumes we'll explore under this topical heading. 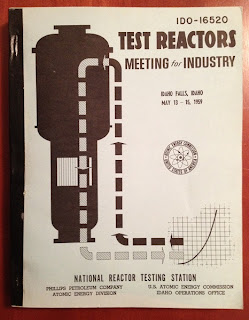 So, as you can see, there will be a lot of historical information appearing at Atomic Power Review from now on.. not that it hasn't already! My campaign to discuss the technology of nuclear energy, and the history of that technology, now has a better framework than ever to get much of this information I'm seeing every day out to those who would like to become familiar with it.