Atomic Power Review finds itself hosting the Carnival of Nuclear Bloggers at the time of the first anniversary of the Great East Japan (Tohoku) Earthquake, the resulting tsunami which killed 20,000 people and displaced many more, and finally the Fukushima Daiichi nuclear accident. Recovery from all of these events continues in Japan today, and will continue for decades.

A wide array of media coverage is, and has been available on this anniversary. For the part of Atomic Power Review, with its focus on nuclear energy, the best effort to mark this occasion can be found at our Fukushima Daiichi Accident Reports page, wherein links are available to all of the known reports by official government or industry agencies the world over. This link list includes the brand new report by the American Nuclear Society's Special Committee on Fukushima.

This rotating feature hosts, each and every week, the work of the world's leading pro-nuclear bloggers and has become a major focus for those who wish to know just what it is that the nuclear industry finds significant. All the top pro-nuclear bloggers either regularly or occasionally submit posts for the Carnival, which is why it's so important for those in the public (and the media) to pay attention to the Carnival, wherever it appears.

You can find out what the bloggers are focusing on this week after I show you the following picture and ask you "What is this?" The answer, and more, after the Carnival. 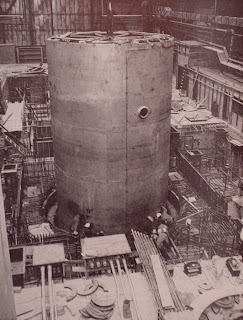 The United Arab Emirates is expected to place orders for four more nuclear power plants next year beside the four units currently being built by a Korean consortium. China, the world’s biggest energy user, is “very likely” to resume approval of new nuclear projects in 2012 as the government completes a safety review prompted by the Fukushima disaster last year.

Vermont Yankee and the Public Service Board: The Questions

Visit to Montpelier and Crabby PSB

In "Vermont Yankee and the Public Service Board: The Questions", Meredith Angwin reviewed the aggressive questions that the Vermont Public Service Board (PSB) planned to ask Entergy at the March 9 procedural hearing. On the 9th, Angwin went to the hearing and heard the PSB ask the questions, with extra layers of sarcasm added. She describes the PSB's unprofessional behavior in her post "A Visit to Montpelier and a Crabby Public Service Board."

Least Informed Piece on Fukushima Yet

The lesson that the world needs to take away from Fukushima is that it is okay to build hundreds or thousands of new nuclear power stations and to place them quite close to the backyards of millions of people. Sure, the plants are not absolutely safe and may be subject to damage from various events. They will not be manned by perfectly competent individuals who know exactly what to do at all times. However the layers of defense enabled by an incredibly dense energy source are sufficiently robust to ensure that the public will be protected from physical harm no matter what happens to the plant. People living close to the plants have nothing to worry about.

U.S. nuclear renaissance is not a sprint but a marathon. Cheap natural gas prices push back some projects by 10-20 years

In the past year the U.S. Nuclear Regulatory Commission has pushed back the schedules for two early site permits and two combined license applications, but there hasn't been so much as a peep of protest from the affected utilities. The agency's rationale is that none of the related plans, and schedules, for new nuclear reactors are concrete enough to justify a squawk.

The agency is right: plunging natural gas prices have prompted those utilities—PSEG, Exelon, Luminant and NextEra—to reevaluate the timelines for their new build ambitions.

Meanwhile the NRC is using the reprieve to focus on an ambitious new Fukushima-related regulatory agenda; agency resources that would have been otherwise slated for staff work on the four new build cases are now being used to impose new safety requirements on the nation's 104 operating nuclear reactors.

APR note: Gail Marcus has two posts for this Carnival, which for some of the authors isn't too unusual. For Dr. Marcus, however, it is - and she'd like to point out that the first piece we'll be linking to here is her preferred piece to showcase at this significant one-year anniversary. However, I feel that the other piece is also quite important as many of our readers here at APR are in the United States and always wish to know what the parallel actions here are. As such, then, Dr. Marcus' preferred piece leads off:

Gail Marcus at Nuke Power Talk looks at what has happened in the year since the Fukushima accident and what it might mean for the future of nuclear power. While there has been a lot said on all sides of the issue, on balance, she sees a fairly positive picture emerging in terms of public acceptance, media coverage, national decisions (with a few exceptions), and plans for upgrades of current plants and for new reactors in the future.

Gail Marcus discusses the report of the American Nuclear Society on Fukushima and the actions of the U.S. utilities to implement post-Fukushima upgrades to existing plants. She sees in both actions evidence that these organizations are stepping up to their respective responsibilities.

"Can we repeat facts about Fukushima often enough to overcome fears?"

There are people who relish in stimulating as much fear, uncertainty,
doubt and stress about radiation and nuclear energy as they possibly
can. Rod Adams, armed with facts heard not nearly often enough in
newspapers and television shows, takes on fear-spreading and false
claims about the Fukushima-Daiichi accident propagated from antinuclear
activists. Complete with a lively and informative discussion thread.

After the Great East Japan earthquake and tsunami, a number of Japanese
investigative groups were created to try to establish what actually
happened at the Fukushima-Daiichi nuclear facility. Les Corrice
provides a “scorecard” of the five primary Japanese investigative
commissions, with a brief description and assessment of each, and links
to their interim reports where available.

APR note: Thanks to Paul Bowersox for the submissions. These two posts are great for their timeliness and content.. and also happen to be written by two of my friends!

That does it for this week's submissions to the Carnival. Readers are advised to dig through the link list on APR, and to watch the auto-update blog roll in the right margin (as well as the Twitter box) for what will probably be many further Fukushima-related pieces at this one year point. Now, as to "what WAS that thing?.."

The illustration displayed at the top of this post appeared on the cover of the December, 1960 magazine ATOM INDUSTRY; the description for the illustration, found on page 3, is as follows:

"The 65-ton reactor vessel for the Hallam Nuclear Power Facility is lowered into place at the 75,000 kilowatt nuclear plant near Hallam, Nebraska. Nineteen feet in diameter and 33 feet high, the vessel will contain the reactor core and its pool of liquid sodium."

According to a visitor's brochure in the APRA collection, this vessel was manufactured of 304 stainless steel and was up to 2 inches thick. (Sodium cooled plants used much lower pressures than PWR or BWR plants, and so had thinner vessels.) The reactor was a graphite moderated, sodium cooled 254 MWt type based on experience with the SRE plant in California. The entire reactor assembly was actually below grade in the facility. Let's examine a few further illustrations. 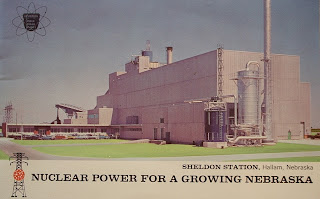 Above is the cover of the brochure covering this plant. The entire power station is properly known as Sheldon Station; the station comprised a coal fired boiler at the far end from us in this shot (supplied by Babcock & Wilcox), a central turbine area for the turbine generator, and on this end the Hallam Nuclear Power Facility, or HNPF. The HNPF was mostly funded by the AEC, who contributed $51.25 million of the total $57 million cost; the entire $20 million cost of the conventional plant was funded by Consumers Public Power District or CPPD (who made up the rest of the HNPF cost.) The entire plant then provided power to the CPPD grid.

Groundbreaking for Sheldon Station took place in June, 1958, according to the brochure; the conventional facility (coal fired) went on line in May, 1961. First criticality of the HNPF reactor took place in 1962.

The reactor vendor for the HNPF was Atomics International; the architect-engineer firm for the HNPF was Bechtel Corporation. Peter Kiewit Sons, Inc. was the overall manager for site construction at HNPF. 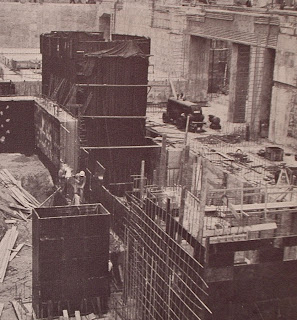 "This is the core cavity liner (center background) for the reactor vessel. Built of sections of half-inch thick steel, the liner is 46 feet high, 24 feet wide and 34 feet long. Note that it is all below ground level." --from the Sheldon Station brochure.

The core cavity liner was surrounded on its outside by concrete. Inside of this was a layer of thermal insulation, then the outer steel tank, thermal shields, and inside of that the reactor vessel. The reactor vessel, the containment tank, and other heavy primary components were manufactured by Baldwin-Lima-Hamilton Corporation at Philadelphia, Pennsylvania and shipped by barge to near the site. Below is a three panel illustration from the brochure showing these components on the barge, then being offloaded on special trucks. The route for these from Philadephia was South to the Gulf of Mexico, then up the Missouri River.

Below, we see another different view of the reactor vessel being lowered into the cavity liner. The vessel has been lowered further in this view than it was in the original shot at the top of this post. 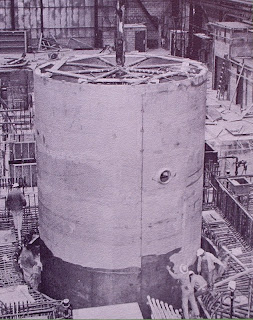 Below, a later shot with the following caption: "Construction of the nuclear facility was moving into its final stages as this picture was taken. The reactor vessel is shown at the left; the steel plates for the fuel storage cells at the right." 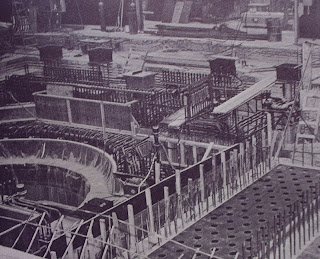 Finally, we see a shot of the station complete, from the rear cover of the brochure. 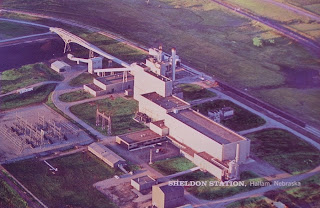 The HNPF is the large rectangular building nearest the right of the photo; next is the turbine building. Jutting out from the side of the station is the combined control and office facility. Furthest away with the large smoke stack and associated coal conveyor is the conventionally fired portion of the plant. Today, Sheldon Station remains but the nuclear facility has been in SAFSTOR for many years, razed to the level of the interior floor and buried under feet of earth. Click here to read about Sheldon Station and its history at the Nebraska Public Power District's website. Since this feature began showing a reactor vessel, CLICK HERE to learn a lot more about reactor vessels in general at APR.

That's all for this Carnival. The Carnival will next appear at Atomic Power Review in April - and that will be the 100th Carnival of Nuclear Bloggers. You'll want to check that one out for some very special features.