I have finally (thanks to A. David Rossin and some other new friends) finally seen an illustration from TEPCO indicating the cooling flow paths being used at the Fukushima Daiichi plants; it does appear now that TEPCO is using the core spray rings instead of the top spray as they had indicated before these second flow paths were added. Below, an illustration of the GE BWR3/BWR4 reactor pressure vessel and attached and internal fixtures, marked up for this update. 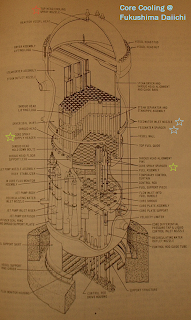 The blue stars indicate the location of the normal feedwater flow path; feedwater is introduced through a nozzle in the pressure vessel and is supplied to a ring ("sparger") which directs the feedwater flow downward, all around the outside of the core barrel.

On the top of the illustration we see a red star by the top spray connection; TEPCO had previously indicated that this would be the second flow path, but clearly the core spray ring is more logical.

One of the things that this author is still wondering about is the recirc pump seals. If the recirc pump seals are failed and leaking, then this will provide a leak path out of the reactor vessel essentially at the height of the jet pump standpipes. This would make it hard to keep water level higher than roughly 2/3 of the normal core height by feedwater flow alone.

There are some further developments regarding TEPCO press releases that I'm just now aware of and will update on those later on today.