Once again Atomic Power Review is proud to host the rotating Carnival of Nuclear Bloggers - this, the 84th edition. This feature travels around to the best nuclear blogs in the English-language world of nuclear energy, and presents the best and brightest pro-nuclear authors every week. Many times I have indicated to regular readers here at APR that this Carnival is the best single way to get an instantaneous snapshot of what is going on in the world of nuclear energy, and this week (even though deep in the holiday season) is no exception.

And now.. the Carnival!

Four entries this week from Brian...

SMR status and review for US, China, Russia, Korea

A somewhat cleaner and cheaper coal to liquid fuel process. One pathway would use nuclear power for the conversion.

Jeff's post on the anniversary of the first electric power generation from nuclear energy is well worth a look!

The lights have been on for 60 years

Meredith Angwin over at Yes Vermont Yankee submits her fine post which really helps us to look forward to National Nuclear Science Week...

Meredith kindly points out that I linked to this post at YVY in a later post at APR which looked forward to NNSW with added information; see here for that post. I do have to thank Meredith for polling the American Nuclear Society Social Media list for the resources she included in her post, and for checking all of them out.

Paul Bowersox has sent us two links to the Cafe...

Jim Hopf at the ANS Nuclear Cafe analyzes and evaluates the serious issues raised by NRC Commissioners concerning NRC Chairman Jaczko, which spilled over into the political arena and into Congressional Hearings last week.

And no Christmas Eve edition of the Carnival would be complete without a (soon-to-be) classic Yuletide poem to capture the spirit of the season, by the almost-anonymous A. Priori at the ANS Nuclear Cafe.

Given the flare-up at the NRC that was made public in the last couple of weeks, Gail Marcus reminisces about the past, when she served as a Commissioner's assistant during a time when the Commission truly functioned as a collegial body, in accordance with the intent of its charter. Although there were differences of opinion, she recollects an atmosphere that was generally open and cooperative.

Since we celebrated the 60th anniversary this past week of one of the very biggest milestones in nuclear power history--the first production of usable quantities of electricity at the EBR-I in Idaho--Gail Marcus returns to a discussion of historic events (started earlier this month) and puts the event in context with some earlier milestones and achievements.

US Areva CEO Jacques Besnainou joined the monthly conference call with nuclear bloggers. In response to a question from Dan Yurman, he said that the firm would restart the construction phase of the Eagle Rock Enrichment Facility in Idaho by late 2013 or 2014, or whenever investment funding is found for the project. Also, Besnainou provided an update on the progress of two EPR reactors being built in China. Click here to see Dan's article.

I would also like to congratulate Dan on setting some new page view records on the Idaho Samizdat blog!

That's it for our Carnival rides this week... and now it's time to tell you what that was you saw up there at the top of this post.

This smallish nuclear power plant is significant because of our recent focus here and on other sites on anniversaries ... the anniversary of this plant's first criticality was at the beginning of December 1956, with a buildup or ramp up to full rated power on December 29th, 1956. This plant is the EBWR or Experimental Boiling Water Reactor, constructed at Argonne National Laboratory. Let's take a look at a few other illustrations of this plant; we'll start with AEC publication TID-4562. 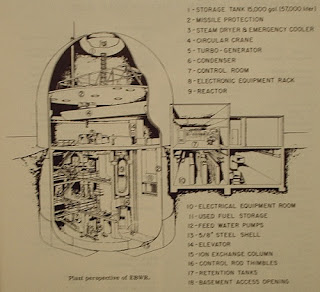 Above, we can see the layout of the plant. The first experimental boiling water reactor of this series was an EBWR prototype, built at NRTS Idaho. The plant we see here took lessons from that prototype. The EBWR was designed by Argonne National Laboratory; the plant architect-engineer was Sargent & Lundy, with Summer Sollitt Co. acting as general contractor.

The EBWR was rated 20 MWt / 5 MWe initially when built. The original core contained both natural uranium and enriched uranium plates with Zirc-2 cladding. The core fuel loading was 4536 kg of natural and 66 kg enriched uranium. There were 77 of the natural and 36 enriched fuel elements in a core structure 4 feet in diameter and 4 feet high. 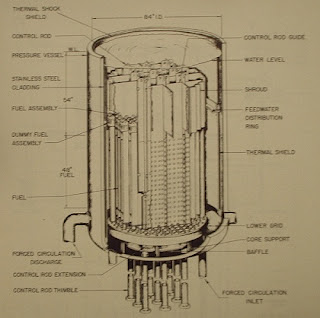 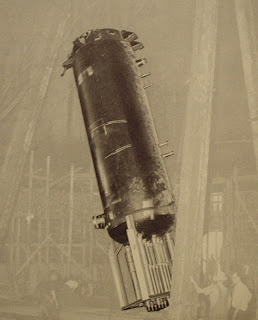 Above, we see a view from TID-4562 (partially ghosted, as published) showing the installation of the pressure vessel in the EBWR reactor building. According to "Nuclear Reactor Plant Data 1959" published by the ASME, this vessel was constructed of SA-212 Gr. B steel, had an 84 inch inside diameter, and was designed for 800 psig and 650F. 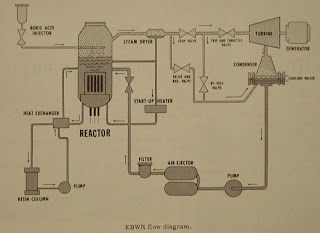 Above, simplified flow diagram for the EBWR. 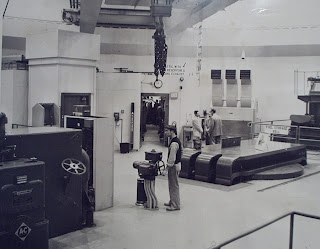 Finally, above we see the operating floor of the EBWR in an AP wire photo dated February 2, 1957. On the left we see the plant's turbine generator, which was constructed by the Allis-Chalmers Manufacturing Company. According to the ASME data, the nameplate rating of this machine was 6250 kw; however, the plant's maximum capability (input to the turbine) resulted in a 5000 kw rating gross, with 4500 kw net power left to supply facilities outside the EBWR plant. At full load, inlet pressure to the turbine was 560 psig with steam at a temperature of 482F. At full rated power and at the stated conditions steam flow to the turbine was 60,000 lbs/hr. This is probably the smallest Allis-Chalmers turbine generator set ever built as a main power unit for a nuclear power plant; the largest was probably that installed at Enrico Fermi Atomic Power Plant (Fermi-1), which we have seen before on APR.

In the photo, the reactor is underneath the heavy looking steel structures nearer the center, while spent fuel storage is beyond this more to the right and rear.

I hope you've enjoyed this week's Carnival and a look back at yet another plant well known in history that first went critical and then became fully operational in December.