A second sample run at Fukushima Daiichi No. 2, a day after the first, has detected Xenon-135 but failed to detect any Xenon-133. Below is a very fresh chart from TEPCO. 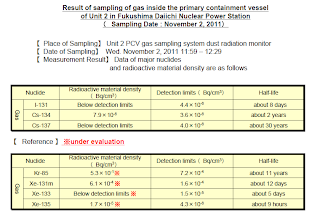 This is good news in one way, in that one of the isotopes was not detected. Some Japanese outlets are still reporting that TEPCO wants NISA to assist in a re-evaluation of the samples since it believes (or believed at some point) that perhaps some error in reading may have indicated Xenon in place of another element entirely.

TEPCO's latest, very new, press release (3 PM Tokyo, November 2) gives no data at all either about the Xenon detection or the boric acid injection. It also omits the injection rate change and gives the old one. Clearly this press report is in error (probably a clerical error omitting the new entries for No. 2) and I'd expect this to be amended or replaced.

TEPCO will be checking the other two plants (No. 1, No. 3) with reactor cores installed for presence of Xenon.

While some outlets continue to use the term "critical" in reference to No. 2 plant and the fission event leading to the Xenon production, it is imperative to understand that no sustained nuclear chain reaction occurred. No site radiation monitoring equipment detected anything alarming or even spurious. No increase in temperature or pressure was noted. The condition of the remains of the core are just not likely at all to be able to sustain any kind of chain reaction / fission rate... considering the mixture of non-fertile and also poisonous (neutron-absorbing) materials now melted integrally in and around the fuel material.

Also... for our non-nuclear friends... the Xenon generated in fission is normally contained inside the fuel elements (be they rods, plates, or other) and decays or absorbs neutrons to move down the chain to a stable element. It remains there permanently. Only because the core materials are damaged or melted at Fukushima Daiichi No. 2 is the Xenon which is produced able to get out into the water and air volume inside the plant at this time and thus be detected by the gas sampling equipment. The effects of Xenon on reactor operation are well known but normally the Xenon is NOT emitted.

At this time there are no changes in detected radioactive materials on site or off site, no alerts off site have been made, and conditions operationally on site are as they were before this recent event.