-At this point NHK news is leading its broadcasts with the observation that the Fukushima Daiichi station is on what it calls "high alert" and a sensible analysis of the situation.

-TEPCO has released the following statement in its daily (or, sometimes, twice daily) situation report on the plant site and operations therein:

On November 1, we conducted a nuclide analysis of emitted gas sampled by
the gas management system of the reactor containment vessel. It was found
out that there was a possibility that short-half-life radionuclide (xenon
133, 135) was detected. There has been no significant variation as a
result of our continuous monitoring of the temperature and the pressure
in the reactor, and the figures of the monitoring posts. However, just to
be safe we injected boric-acid solution through reactor water injection
line from 2:48 am to 3:47 am on November 2, since it was undeniable that
fission reaction had occurred. 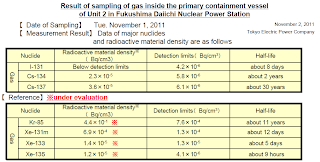 -As might have been expected, some news outlets are carrying a statement by TEPCO that NO major criticality incident / accident has occurred. There has been no rise in temperatures or pressure at the plant, and only a one microsievert per hour change at the closest detection station which is probably simply within the discriminatory limit of the equipment - in other words, there may be no actual change at all. No neutron flux of any level has been detected on site, according to TEPCO (in this instance, through NHK TV.)

-TEPCO's statements indicate (as I said in the previous post) that there are no expected increases in releases to the atmosphere as a result of this ongoing evolution as it stands now.

In order to make better sense of the numbers, TEPCO has apparently given some different interpretations of the measurements of Xenon which are listed in the above illustration (from official TEPCO materials.)

TEPCO tells Japan Times that the Xenon concentration is roughly "one hundred thousandth becquerel per cubic centimeter" for both isotopes in the gas sample.

NHK is carrying a description from TEPCO that the concentration of Xenon in parts per million in the gas sample is about 12 to 14 ppm... although the description given in the NHK story is clearly garbled, likely due to lack of understanding.

All news sources in Japan are carrying statements obtained from TEPCO contacts that fission is assured to have occurred to generate this Xenon. However, many of them are talking about criticality - which is of course a self-sustaining fission chain reaction. This is not likely; a number of other mechanisms could account for a brief fissioning event in the demolished core material. Further, the deranged state of the core, almost surely with the melted control rod blades integral, makes any sustained chain reaction almost a practical impossibility. The chances of this type of event are higher with a rapid core reflood, but we've already shown the injection rates and no rapid increase in injection has occurred.