NHK has carried the distilled result of information it has obtained from TEPCO regarding the possible amount of fuel damage, and melt, and vessel failure, and fuel melt into the dry well at Fukushima Daiichi No. 1.

To summarize the report (and we should note this is all preliminary) TEPCO feels that the melted core material that exited the pressure vessel may in the worst case, or in other words if the worst postulated case exists, have eaten about 2/3 of the way into the bottom structure of the dry well.

No exit of the material from the dry well structure is supposed.

TEPCO does not feel the material could have gotten below the structure, or into the actual basement, or come in contact with the floor or the ground. The material is not in the earth below the plant. Such reports as this are circulating, leading to a widely hysterical supposition on one site of a "hydrovolcanic explosion." That is about the worst - and certainly the least intelligent - hyperbole this author has ever read. I only mention it here because TEPCO's initial analysis released to NHK today (and about which I'm sure we'll see more) is timely in relation to that story.

Readers of this blog are all too well aware of this likelihood. In fact, let's take a look at a post from way back -- below is a link to a post I made on May 14th, 2011 when details were still far from clear about the plant conditions.

Fukushima Daiichi No. 1: Core melt / exit of pressure vessel speculated by TEPCO, NISA (post from May 14, 2011)

Readers may recall, a couple of months back, repeated attempts by TEPCO to indirectly assess the conditions of the lower vessel heads at the three reactor plants. None of these was successful - no useful data was obtained. What was clear though was that the electrical equipment in the lower head area was very heavily deranged, and not just in one zone or area, it appeared. TEPCO would like very much to get a handle on the actual condition and location of core material at each plant (and each is different in this respect) but so far has been really unable to directly assess this. The new study results that NHK is quoting come from a variety of data TEPCO has accumulated which don't require direct vision or detection. This is probably the best we'll have for a while.

Sharp readers also may recall the days in which the JAIF was continuously posting updates; that organization's last given estimate of core damage at No. 1 plant was, I believe, 70%. I should add though that all the data JAIF was using to attempt to estimate core damage percentages was very rough and some of JAIF's revisions of core damage percentages were taken directly from TEPCO. (Of course, all of JAIF's news items now are from NHK -- it has stopped making its own statements or assessments, at least in public.)

When TEPCO releases the full detail of this report, I'll put those details here.

The NHK report indicates a melt depth of about 2.1 feet. The distance to the ground is roughly eighteen times this depth from the dry well interior floor to grade. Below is a drawing from WASH-1082 which I've marked to show the distance from the dry well floor to the grade outside, which on the particular plant shown is 39' 0". I do not presently know the exact measurement at Fukushima Daiichi No. 1 but it is likely within ten percent of this measurement... meaning that in the worst case that TEPCO is describing, by its own data, the core material may have melted only about as much as 5% of the distance to the grade. 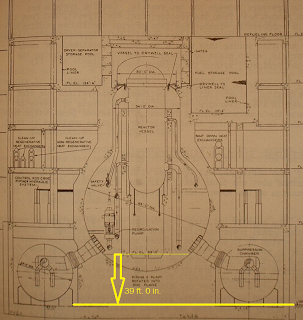