Here is a link to an article worth reading.

This article appeared in the Northern Colorado Business Report on October 7th and is a good example of level headed coverage concerning spent fuel storage at a site that formerly had, but does not now have, a nuclear reactor operating.

Ft. St. Vrain was the second of two General Atomics high temperature gas-cooled reactors to be built in the United States as demonstration plants and as central station generating plants. The first was Peach Bottom 1, ordered by a large consortium in 1958 (which was headed by Philadelphia Electric) and placed on line in 1967. Before that plant was finished, GA got an order for the Ft. St. Vrain Nuclear Generating Station from the Public Service Company of Colorado.

Below we detail from an October 1968 ad showing the station as designed. 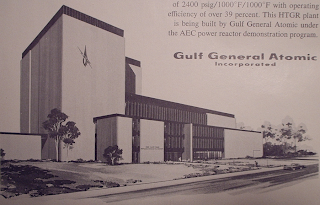 By this time, Gulf Oil owned General Atomic - thus the new name "Gulf General Atomic" on this ad. The full text of this ad, which appeared in the ATOMFAIR '68 brochure 'Exhibitors Program' reads as follows:

Construction is now proceeding rapidly on the 330 MW(e) High Temperature Gas-cooled Reactor (HTGR) plant near Platteville for Public Service Company of Colorado. Site preparation and excavation for the Ft. St. Vrain Nuclear Generating Station were completed during the summer; the construction permit was issued in September; and reactor construction is under way. This will be the first nuclear power plant in the U.S. to produce electricity at modern steam conditions of 2400 psig / 1000F / 1000F with operating efficiency of over 39 percent. This HTGR plant is being built by Gulf General Atomic under the AEC power reactor demonstration program."

The steam condition data in this quote is of interest, because prior to this time GA had made a fair amount of press with the first gas-cooled plant it built, Peach Bottom (later known as Peach Bottom 1 when two more plants, both GE BWR's, were built on site) by stating that Peach Bottom would be the first plant capable of generating 1000F steam in the United States from nuclear energy alone. Steam conditions on Peach Bottom 1 were 1450 psi / 1000F. 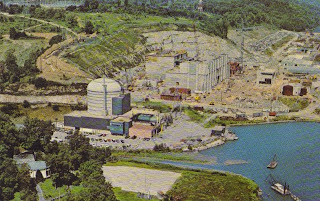 Post card / APRA collection. Left of center in this photo is the Peach Bottom 1 plant, the experimental 40 MWe high temperature gas-cooled reactor. Further away under construction are Peach Bottom 2 and 3, both ordered in 1967 and which are GE BWR plants still in operation today. In the very lower left corner of the photo is the now long-gone Visitor Center.

I do hope everyone reads this article, because it's important to keep things such as this story in mind as we find ourselves temporarily (I hope) without a national plan for a central fuel repository or else a plan for fuel recycling.