It's time again for the weekly Carnival, and this week APR is proud to host. There seem to be as many entries as ever this week, so I'll skip the usual long-winded prefatory matter and get right to the content.

That is, after I ask you "What is this?" and show you a picture. 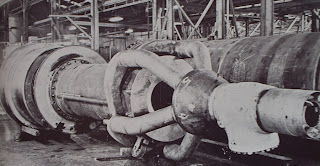 You'll get the answer and perhaps a bit more after the Carnival entries. So let's get to it!

This week has seen a great deal of confrontation with anti-nuclear activists, both in comment sections of blogs and on the Facebook page of one Christie Brinkley, who is actually on the board of directors for a non-profit 501(c)3 anti-nuclear organization, RPHP. For that reason, and knowing the full weight of the action which has gone on this week, APR has decided not to present its own specifically produced content and instead defers the lead article spot to Suzanne Hobbs for her fine and brief summation of the events.

Speaking briefly of this organization, called RPHP or the Radiation and Public Health Project... Yours truly countered Joe Mangano who posted on Brinkey's side with a post among other things about the SRE core damage incident. (To be brief, Mangano called this possibly the worst core melt in US history and something which was suppressed; I posted that it was never secret, that 12 of 43 fuel elements were damaged with a total release of ~0.3% of the core inventory, and that the plant was refueled and operated following this 1959 incident. There was more.) Suzy tells us in late breaking news now that she's found that in 2008, 73% of RPHP's income went to pay Mangano. This would be $82,000 dollars. (I looked at the 2010 file and that appears to be Mangano's annual salary.) Only $2800 was spent on radiation testing -- about 2.5% of their funding. It's not surprising, then, that Mangano rallied to Brinkley's defense; he is RPHP's paid man, holding position of Secretary with the RPHP organization. Look for more data at guidestar.org. Thanks to Suzanne Hobbs for this information.

Hobbs reflects on a recent energy debate with model/actress Christie Brinkley. Unfortunately, celebrities are effectively reaching the public with false information about nuclear energy on a large scale. She concludes that celebrity anti-nuclear activism is a real issue that should be addressed by the nuclear industry.

Vermont Yankee is refueling now. Entergy placed its bet and went
ahead with the refueling outage despite the uncertainties of the court
case. Yes Vermont Yankee honors this decision and the people who work
the outage with two posts:

Songs for the Outage: Save a Millirem and Don't Stand So Close

Rally This Sunday In Support of Vermont Yankee

This is a short blog, but it points to an excellent newsletter done by the International Association of Energy Economists. I have co-authored one of the articles in this newsletter, but the newsletter itself is filled with a dozen points of view about Fukushima and its impact in Japan and the world at large. Interesting reading from a non-nuclear perspective.

A safety evaluation review and decision are expected in November

The NRC's review of the effects of the August 23 earthquake on Dominion's North Anna power station is coming to a logical and reasonable close. The agency says the staff is writing a safety evaluation review that could result in a re-start decision letter by mid-November.

The NRC wrote in its "FAQ" about the earthquake . . . "ground motion experienced by plant structures . . . may have exceeded design [but] does not appear to appreciably encroach on built-in seismic design margin of safety related structures and components."

The bottom line is that the plant responded well to the event with no apparent damage to safety significant systems nor to other systems and buildings generally.

Dominion VP Eugene Grecheck told this blog in an exclusive interview immediately following the NRC’s Oct 21 meeting that "the utility is pleased we don't have to re-analyze the entire plant."

NRC spokesman Scott Burnell confirmed to this blog Oct 21 that following a public meeting in Mineral, VA, on November 1 to review the agency's findings, that staff will write the safety review and prepare the decision letter. If all goes well, it seems reasonable to think North Anna could be back in the business of providing power to its customers by Thanksgiving.

APR NOTE: Be sure to scope out Dan's new layout!

Amory Lovins wrong before, wrong now and pushing a plan for American Poverty

How wrong and misleading can someone be and yet remain an influential
technical expert ?

The first contribution is on the prestigious ANS Nuclear Cafe.

"Samples from NRC Webcasts (First of a Series)"

There are many intelligent, caring and dedicated mothers in the nuclear industry. In order to share their experience about the nuclear world, NA-YGN has managed to capture the perspectives of four of these women. Their stories are humorous and insightful, and provide proof that you can be a nuclear professional while having a home life at the same time. Hope you enjoy the stories.

APR Note: This is a very good read.

"Civilian nuclear energy programs as a "fig leaf" for proliferation: Does it matter?"

In this post, I take a critical look at the idea that weapons proliferation follows as a natural consequence of civilian fuel cycles. Likewise, I ask the question of how relevant or meaningful it is when countries intent upon weapons proliferation attempt to use civilian programs as a "fig leaf" to cover up illicit activities.

Gail Marcus writes about the growing confrontations over oil and gas resources today in two different parts of the world. These disputes are troubling reminders that disputes over resources have often led to warfare in the past, and that a transition away from such resources is needed to help reduce the risks of war in the future.

That does it for this week's Carnival entries. I think this is as many as APR has had any time it's hosted this event - I really appreciate the time and effort everyone put toward this this week.

Now to describe that odd looking thing you saw earlier. This is the pre-assembled body of one of the three primary sodium pumps manufactured for the Enrico Fermi Atomic Power Plant. Behind it is the cylinder or casing inside which it will be mounted, in a vertical position. This shot appeared in the ATOMS FOR PEACE / USA 1958 photo presentation book; the picture was taken on the shop floor of the Byron Jackson Division of Borg-Warner Corporation. 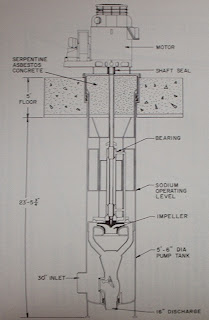 Above, an illustration of one of these pumps assembled and mounted in the plant. This illustration is from "Enrico Fermi Atomic Power Plant," publication APDA-124 published by Atomic Power Development Associates, Inc. in January 1959. Click the picture to enlarge; the dimensions of this pump are marked and it might be larger than you would think. This pump was driven by a 1060 BHP electric motor and was rated initially at 11,800 gallons per minute of liquid sodium at 1000F. Total dynamic head of the pump as designed was 310 ft. Later publications give a rating of 13,000 gallons per minute. 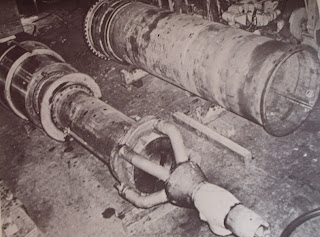 Above, another view of one of the pumps and its casing or "pump tank" from APDA-124. The outer diameter of the pump tank is five and a half feet.

This is not the largest sodium pump for reactor service ever designed. Byron Jackson, in response to continuing fast breeder plant designs (which we know continued through cancellation of the Clinch River project in 1983) designed ever larger pumps until reaching probably the zenith with the machine shown below in an advertisement. 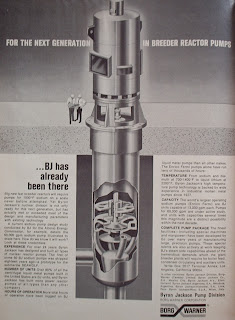 This is a full page ad taken out by Byron Jackson Division of Borg-Warner Corporation in the Exhibitor Program for ATOMFAIR '68. The ad can be clicked to enlarge; note that this very large unit was designed for 60,000 gallons per minute pumping capacity of liquid sodium. The ad copy makes interesting reading.