Two news reports on the reactors (as opposed to spent fuel pools or any other portions or locations) at Fukushima Daiichi...

First, TEPCO has greatly increased the amount of water being injected into No. 2 and No. 3 reactors through the core spray lines. This is an attempt to drive the measured temperatures down in order to establish a 'cold shutdown' condition.

TEPCO indicates that there was an increase in containment vessel pressure in No. 2 reactor plant shortly after the beginning of injection via the core spray line - thus it is certain that the water being injected through this line reached the core. It is important here to note that at this point, when either I or TEPCO use the term "core" this refers to the essentially deranged, or demolished, mass that contains the fuel elements' material and the control rods' material, in condition not fully known. (This is not news to long-time APR readers.)

After noting the success of the use of the core spray lines, TEPCO has decided to make a large increase in total water flow to these two reactors through the core spray lines (keeping the feed line amount the same) in order to attempt to determine what flow rate will give a cooldown rate to meet the desired 'cold shutdown' timetable. Even though the chances of recriticality are very remote, TEPCO has decided to inject borated water prior to each major increase (in steps) and monitor conditions closely.

The second news item concerns a test that TEPCO performed on No. 1 reactor's control rod position indication sensors. These sensors, one for each of this reactor's 97 control rods, are located below the reactor and are integral with the control rod drive mechanisms - mechanisms that position the control rods up and down in the core as required to adjust the core's power output. TEPCO believed that conducting some simple maintenance type tests on these units, which have a large number of magnetic switches inside to "mark off" the travel of the rods, might give a clue as to the condition of the bottom of the reactor pressure vessel.

Unfortunately, the results of the tests seem very inconclusive - or perhaps in better words, the results don't seem to give any sort of clear indication of the bottom of the pressure vessel because it seems as if the detectors and their interconnecting wiring may have been heavily damaged by heat, by radiation, and probably also by steam exposure for prolonged periods, all of which have affected the equipment such that any real idea of any specific damage location on the bottom of the RPV isn't detectable. In fact, only one of the 97 tested fully satisfactorily.

Below we see a part of the diagram TEPCO released showing some of the test results in what is unfortunately a very confusing graphic. 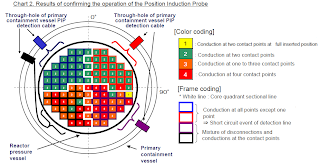 In the illustration above, we are looking down on the core. For control and indication purposes the core is divided into four sections or quadrants; note that there is a white line dividing these, and that each has its own color coded sensor system (again for the purpose of this illustration, we'll just refer to colors.) In terms of the small numbers in the blocks (each block represents one control rod drive mechanism position indicator) the lower the number, the better the test. As was reported by TEPCO, and apparently carried only widely by Kyodo News and then Fox News, we see that only one - the yellow block - passed fully.

If we assume that the general condition of all of the cable runs, the insulation and the containment penetrations is good then we might assume that RPV failure has occurred more in the area of the lower quadrants as seen here (note the black and the purple containment penetrations and wiring runs.) However, TEPCO states that it appears that there is enough indication of wiring damage that we cannot infer the condition of the pressure vessel from this test alone - the test results may be spurious. For example, the detectors might be OK but the interconnecting wiring shorted out. Thus, TEPCO feels that this test didn't really give it the kind of information it was looking for.

TEPCO might continue on with this test at No. 2 and No. 3 reactor plants; there is no sure word yet. What is sure is that this is the first deliberate test data TEPCO has taken to try to determine how bad the condition of the lower pressure vessel head might be at any of the plants.

We will keep up on this testing and relay results as they're available.