-APR introduces a new recurring feature to its pages - the APR Atomic Journal. This non-uniformly cyclical feature will cover many historical and technical aspects of nuclear energy for both laymen and experts. I sincerely hope you enjoy it.- 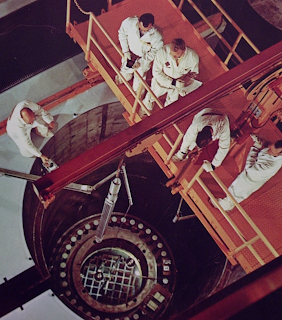 Above: Initial fueling of the Elk River Power Reactor by technicians of the Allis-Chalmers Manufacturing Company, late 1962.

The nuclear power plant commonly known as "Elk River" was hailed in the early 1960's as "Rural America's first atomic power plant" by the Rural Cooperative Power Association, or RCPA, who was to operate the plant and supply power from it to its customers in and around Elk River, Minnesota. Atomic energy was still very new and very much anticipated, and this plant was a test to see, among other things, if a small reactor plant could be built and successfully operated as a part of a comparatively small electric utility's system.

I have been quite fortunate to acquire a large amount of historical material covering the early years of the atomic age in the United States, and while the majority of the focus is on more well known plants (Shippingport, Fermi, Dresden) the Elk River plant appears fairly regularly in this early material. It is for this reason that I present the following narrative details, in order to supplement historical information already available in print and on the internet. Most of what you are about to read has been generally unavailable until now.

The first negotiations to build what became Elk River started in 1957 between AMF Atomics Inc. which was a division of AMF (formerly American Machine and Foundry) and the Atomic Energy Commission (AEC.) The plan was to construct a small boiling water reactor operating on the indirect two-loop cycle (also known as the "closed cycle boiling water principle"), which would be owned by the Atomic Energy Commission. The utility involved, RCPA, would purchase steam from the plant (thus from the AEC) and would also provide the steam portion of the plant, as well as the operating staff of the entire plant once turned over from the reactor vendor, AMF. (In reality, a conventional steam plant already existed, having been built in 1950; RCPA would purchase additional equipment to install in the plant to accommodate the nuclear plant built nearby.)

We do not have any solid data on what the plant would have looked like. We do however have a design from an AMF Atomics sales brochure from that time which roughly matches the designed output and may well have been the basis for the opening of AMF's negotiations with the AEC. 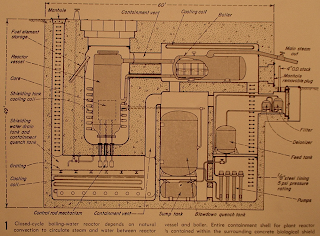 Above, an illustration showing AMF Atomics' Closed Cycle BWR plant. As with all photos on this site, you can click to enlarge the photo.

This plant was to operate with a closed boiling water cycle on the primary side, with flow by natural circulation. According to the AMF information, the entire 20 MWe plant is contained in a concrete block 16 feet wide, 60 feet long and 50 feet deep. No external containment to this other than weather covering was to be provided. The concept of the plant was simplicity; stated advantages over a pressurized water design were the following: 1. No pumps or valves in the primary, saving cost and maintenance. 2. Lower primary pressure, allowing lighter pressure vessel. 3. High heat transfer rates and more effective use of heat transfer surface. 4. No radioactive steam supplied to turbine building. 5. Heat capacity of primary heat exchanger adds lag ("flywheel effect") to system, relaxing requirements on control system.

This brochure (bound in a large volume of various reactor brochures and reprints which we obtained from a former Bettis Atomic Power Laboratory employee) states that while the cost of such a plant per kwhr wasn't competitive with large central station plants, it was competitive with rural plants.

Now, looking at the drawing we can see one very interesting feature; this plant has a very primitive pressure suppression containment design - and an early one too, considering that the AMF data is from September 1955. Below the reactor cavity can be seen what is called the "Shielding water drain tank and containment quench tank." This is connected to the steel containment shell inside of which are the reactor, steam generator and all primary piping by a three foot diameter vent pipe. The design of the containment was such as to limit internal pressure under any circumstance whatsoever to 5 psig.

This plant would have been built, theoretically, adjacent to or near the existing Elk River Station and supplied a newly installed turbine in that building with steam. However, before any material was purchased, AMF was out of the running.

The March 1958 edition of the Atomic Industrial Forum's FORUM MEMO magazine details the fact that in October 1957, AMF Atomics and the AEC had reached an impasse on the grounds that AMF could not agree on a price ceiling (knowing how the PDRP was working at this time, probably a "turnkey" price) which led to the AEC making an open offer for bids on the reactor portion of this project. In a later issue of the same magazine, RCPA President O. N. Gravgaard told the AIF that AMF had withdrawn its proposal for the project and had decided to get out of the power reactor business. However, RCPA had already ordered most of the conventional (non-nuclear) equipment for the project, causing concern to the company; as the AEC had opened up for bids, the company elected to construct another coal fired boiler on site and supply the steam equipment with this new boiler until an atomic plant was built on the site.

Taking a tangent for the moment, it is interesting to note Mr. Gravgaard's statement that AMF Atomics was getting out of the power reactor business, because it wasn't really in it, having received no other orders for power reactors even though it was fairly heavily advertising them. AMF did later on through 1958 however begin work on a project to construct exactly the type of reactor plant shown earlier in Cuba; this was later announced as having been dropped due to the unstable political situation in that island nation. With that cancellation ended any prospect of AMF Atomics building a power reactor.

Getting back to Elk River... Two bids were received by the AEC, one from General Electric and one from ACF Industries' Nuclear Products-ERCO Division. According to the AIF Forum Memo, other firms expressing interest to bid were American Radiator & Standard Sanitary Corp., Nuclear Development Corporation of America, and two other smaller companies with no nuclear experience. The deadline for proposals was February 3, 1958 and in March the AEC announced that ACF's bid had been approved. At the time of acceptance of ACF's proposal to begin a discussion that would lead to a fixed price ceiling, the basic schedule was for construction of the plant to begin in the Spring of 1958, critical testing at the end of 1959 and full operation of the plant on RCPA's grid early in 1960. RCPA agreed to operate the plant for five years.

ACF Industries formed its own nuclear engineering section in 1954 in order to allow it to enter the field first with tank type research reactors, and then later with power reactors. At the same time, ACF purchased a company called the Engineering and Research Corporation ("ERCO") and operated it as a division. April 1, 1957 saw ACF merge its nuclear engineering section of ACF Industries and its ERCO Division into one unit, which it then called the "Nuclear Products Divison-ERCO." This firm had several tank type research and training reactors under construction and more planned when it won the bid to construct the Elk River Plant's new atomic addition.

At the time that ACF won the bid, the original concept as outlined by Rural Cooperative Power Association (RCPA) stated that the plant would be completed in late 1959 for a total cost of $6.2 million. The growth of the cost, which killed the AMF bid because it kept going up, reached $8 million with no fixed ceiling and a completion not until 1961. ACF promised completion in 1960 at a cost of $11.4 million.

ACF immediately engaged Sargent & Lundy (Chicago) as the architect-engineer firm for the project, and the Maxon Construction Company of Dayton Ohio as its general contractor.

ACF's design for the plant was functionally identical to AMF's, in that a boiling water reactor was to be employed operating in a closed loop, with natural circulation; steam was to be generated in multiple heat exchangers which would then supply steam to the RCPA plant. Since the plant was designed for superheated steam it was necessary to incorporate in the new construction a separate coal-fired superheater to arrive at the proper steam conditions. We will now look at some early ACF advertising artwork showing the plant design. 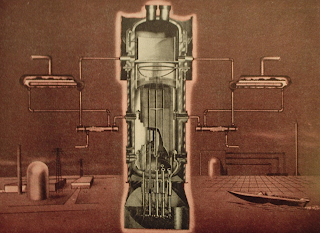 Above (and again, click to enlarge) we see an ACF illustration which appeared as part of an advertisement in the May, 1959 issue of NUCLEONICS. From this ad: "The boiling water reactor concept is ideally suited for application in electrical generating plants such as the one ACF is now building for the Rural Cooperative Power Association at Elk River, Minnesota." The ad states that ACF was prepared to supply such plants at ratings up to 50 KWe (although the Elk River installation was to be a much more modest 22 KWe.)

This illustration clearly shows two horizontal tube and shell type steam generators connected to the reactor without forced circulation pumps; the steam outlets to, and feed return from, the generators is clearly visible as are the feed preheaters. A ring near the top of the vessel internal to the shroud is for emergency cooling water injection and/or borated water injection. 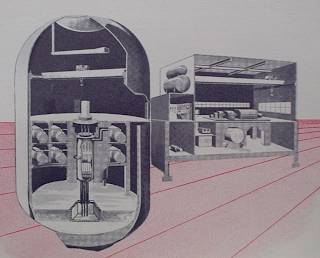 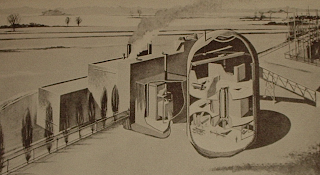 This is the first illustration that shows the plant at Elk River essentially as it was built. The existing steam plant can be seen furthest from the point of view, with two stacks atop it. Between this plant and the reactor plant containment is the coal fired superheater. The containment is of wholly conventional, for that time, form and shape.

The October 1958 FORUM MEMO magazine mentions that in September 1958 ACF had awarded a contract to Chicago Bridge & Iron to build the containment for the Elk River plant for $500,000 which was to begin immediately. The June, 1959 issue of POWER REACTOR TECHNOLOGY gives the following details on the containment: The plate material was A201 steel (A300 heat treatment) of either 0.50 or 0.70 thickness depending on location; "A" numbers are ASTM standard. Gross internal volume of the containment was 405,200 square feet. Design pressure was 21 psig and test pressure was 26.25 psig with a specified leakage of 0.1, expressed as percent of volume (measured at STP) per psig.

NEXT APR ATOMIC JOURNAL: Construction, testing, operation and shutdown of the Elk River reactor. You don't want to miss the next installment!