We find ourselves at another noteworthy point in the recovery from the Fukushima Daiichi accident, although none of the media in Japan have made note of it. This point is that point at which the media totally ceases daily, or even every-other day, coverage of an event and instead turns to the future implications.

In the case of Fukushima Daiichi, the operations at the site are progressing slowly but are going essentially as expected, giving the major news media nothing newsworthy to report. It is almost as if many of them had assigned reporters full time to the story in order that something be reported every day, whether it was of consequence or not, and it is also almost as if they've moved these reporters to other lines of duty considering the total shutoff of specific, plant related or accident recovery related news on the majority of Japanese media of all kinds.

Meanwhile, what the Japanese media are really reporting on is the really big question all of us have, which is of course at this point unanswerable and essentially unpredictable; this question being "What is the future of nuclear energy in Japan?"

Prime Minister Naoto Kan, after having twice reversed his position, has now indicated he will resign - perhaps taking his very recently reinstated political plan for a non-nuclear Japan out of the running. Elsewhere, various officials and experts are floating plans for a non-nuclear Japan while others are pointing out the problems that the loss of a great amount of generating capacity will bring.

Perhaps most important to point out is the new austerity movement, I'll call it, where people are essentially saying "We're fine living right now with reduced electricity usage, switching to unplugging equipment in standby, using fluorescent lights, driving less" and so forth which brings up, then, the position that even with a large number of nuclear plants down for inspection and not being allowed to start back up, the Japanese public is "fine." Whether or not this can be maintained with Japanese industry back humming at its full potential producing the many varied heavy industrial products and machines it did just prior to the earthquake and tsunami remains to be seen. One would imagine it cannot.

This sense of self-sacrifice for the greater common good is not peculiarly Japanese; the Germans have gone far beyond it, and others as reported here and elsewhere are sure to follow. However it must be pointed out that it is always the most radical view, leading to the most radical changes if pursued, that gets the press and frankly this author cannot help but believe that nuclear energy will continue to play a part in Japan for the foreseeable future. It seems clear now that the movement to reduce Japan's dependence on nuclear will gain footing, but it seems clearer that Japan's economic future is tied to its industrial production base's need for reliable and inexpensive electricity. It seems clear that Japan will reduce its participation overall as a nation in the worldwide construction of nuclear plants, as a result of the decision not to take part in the program in Turkey, but it is also clear that some export of this technology will continue as shown by the statement that work with Vietnam to construct nuclear plants will continue. Thus, the nature of the whole nuclear-industrial complex and that of the utilities as well is in a state of flux.

What is most fortunate for advocates of nuclear energy - and also fortunately probably true - is the growing perception that the "troubles" and "danger" of nuclear energy in Japan are almost entirely political. The public sentiment in Japan seems to be shifting towards two beliefs: First, that the cozy yet muddled regulatory system and utility system led to laxness that may have made several contributions to the accident, and second, that the only way forward with nuclear energy in Japan is to fix the political and regulatory systems so that safety is ensured. One cannot help but support this kind of thinking, even if only in part, no matter his affiliation or disposition toward nuclear energy.

A growing trend, thanks in part to Professor Ino, is to blame the damage at Fukushima and thus the inherent risk of other plants simply on the age of the plants. The Japanese public in some measure is riding along the rising slope of misinformation being spewed by the anti-nuclear forces and carried by any media that will run it. (Thankfully that sort of thing has ended in this country already.) What the informed person will find out that it is not simply one number - age in years - that leads to any intelligent assessment of risk. But, like the catch phrase "hot particles," age is a simple enough identity to get hold of and instigate fear with.

Long-term readers of this blog are fully aware of its campaign against a lack of education in terms of nuclear energy and thus are immune to such simplistic attacks. In point of fact, they do no one any service whatsoever. The topic (and the technology, more importantly) is too complex to be explained or explained away with a few buzz words. Or two-digit numbers.

We will end here with our updating of the overall political situation regarding nuclear energy in Japan. The situation is fluid, and it seems that even after Kan's resignation there will not be a clear way ahead for some time. You can be sure that continued updates on this evolving situation will continue to appear here.

Now, for a few technical details at FUKUSHIMA DAIICHI.

-The steel framing for the reactor building enclosure at No. 1 plant's reactor building is being placed as of now. TEPCO has released a photo of the first corner structure being lifted into place on-site. 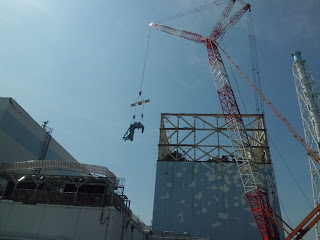 -Cooling flow to the reactors at all three plants (No. 1, 2, 3) continues to be stable even with TEPCO starting and stopping the cleanup system. The additional components as shown previously on this site are being placed in service, and TEPCO continues to make adjustments and modifications to the system as needed. As I've written before, while the process seems nagging and trouble-prone, it is progressing slowly toward stable operation.

-TEPCO has released some photos taken at Fukushima Daiichi on the day of the tsunami. Below is a photo of the seawater pumps outside either No. 5 or No. 6 plant on March 11, 2011. 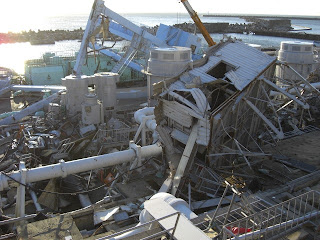 Below is a submersible water pump (electrically operated) being lowered into the water outside No. 5 / No. 6 plants on March 17, 2011 to restore seawater for cooling these plants. 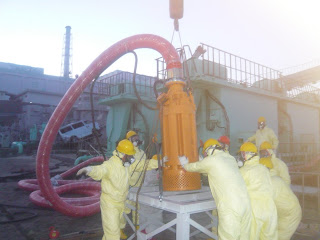 Below is the control room of Unit 5 at Fukushima Daiichi station after the tsunami. The other half of this room, controlling No. 6, looked identical at the same time but had its overhead lights on. I am going to play the usual press trick and show the more dramatic photograph. 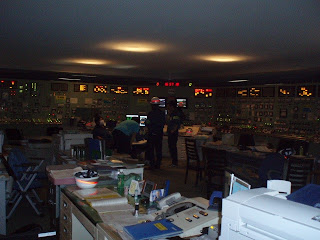 -As of August 10, TEPCO has increased the amount of water being injected to the core of No. 3 plant at Fukushima Daiichi. No. 3 core has remained hotter than the other two for much of the duration of the recovery, and one wonders what differences in the demolished core geometry or in the feed piping or RPV failures are driving, or at least assisting, this differential. However, having said that, the temperatures at all three plants are essentially where they have been for some time and the increased injection will drive No. 3 plant back down from the last reported 116C feed nozzle temp / 105 lower RPV temp by all indications.

-Gas samples have been taken from No. 1 and No. 2 dry wells, and we will report on either NISA or TEPCO analysis of the figures (the measured amounts of varied isotopes are out) when either is available. It should be noted that English translations of the various documents are becoming less available slowly over time.

That concludes today's update. Keep looking back for further coverage and some exciting new features we're working on!