All of the doomsayers --- you remember, all the folks who were blabbering around the internet that an accident was in progress at Fort Calhoun station, where the pictures of flooding were quite well published --- really look bad now.

Fort Calhoun has exited the notification status. Text to the NRC from OPPD on August 29:

"At 1342 CDT on 08/29/11, FCS [Fort Calhoun Station] terminated the Notification of Unusual Event for flooding. Missouri river level receded to less than entry criteria and is currently 1003.56 ft MSL."

The licensee has notified the State of Nebraska, Harrison County, Washington County, and Pottawattamie County of the termination."

Photos show the ground around the station clearing of water. Click to enlarge. 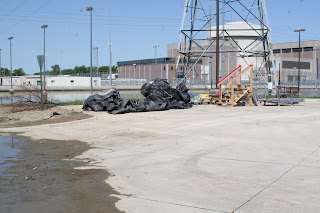 As with the recent doomsaying about Hurricane Irene, this doomsaying also now looks very "over the top" in retrospect. Which, by the way, we told you would be the case a long time ago.