Atomic Power Review is proud to again host the rotating Carnival of Nuclear Bloggers. This feature appears weekly on a varied roster of distinguished pro-nuclear blogs and showcases absolutely the best work that the pro-nuclear blogosphere has to offer.

In keeping with the popular theme APR used the first time it hosted the Carnival, I offer the following photograph with the question: "What is this?" 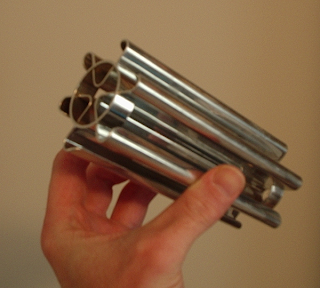 This photo was taken today. I am holding this object in my own hand. It is very very light weight, and pretty reflective. It is fabricated from several parts. That's all the information I'll give for now - the answer and a little background follows our parade of Carnival participants. Speaking of which... here we go!

Areva is sailing in uncharted waters. New CEO says it is too soon to assess the full consequences of the Fukushima disaster on its long term strategy. The uncertainty has affected the firm’s shares and reduced investor confidence in the organization’s future. Some of these assessments may be premature since most of the rest of the global nuclear energy industry is in the same boat.

Rod Adams would like to point out to everyone that it's very important to remain informed about nuclear energy's safety record and remain wary of those who constantly peddle doom and gloom - which is referred to by Rod as the FUD approach. You'll understand once you read his article.

PESTEL IN THE NUCLEAR INDUSTRY 3

In this post, Margaret explores the international political environment for nuclear power.

“There are reasons BEYOND economics or environment for nuclear energy to be a part of this nation’s energy program. It is clear that many nations in the world are going to continue to use nuclear energy as a fundamental part of their energy portfolios. If the United States does not participate in the development of new technologies, in the design of new reactors, in the building of new nuclear facilities, and chooses to end its leadership in this technology, we will no longer be at the table with the rest of the world in determining the best, safest, and most accountable operations of these facilities.”

-APR NOTE: We are not sure why APR doesn't have a link to Gail's site, but we'll be fixing that right after the Carnival posts. For those regular readers here who have not seen her site, it is surely worth a read.-

Gail Marcus discusses the fact that what is done in one country cannot necessarily be copied directly into another country with a different culture, legal system, and history. She provides some examples from her previous blogs on aspects of the Japanese system that may need changing, and points out where US and other models may or may not work.

Kirk points out that the energy content in fissile material means that it is worth six times its weight in gold.
He also discusses how a new reactor could digest the nuclear waste from existing reactors.

Next Big Future has two entries this week. Here is the second..

South Korea is making good progress APR1400 builds and China with the AP1000.

India is pushing ahead with uranium exploration and development. India's nuclear generation has been constrained
because of a lack of uranium. They will be able to operate their reactors at full power.

Fred Moore on the HTGR.

NEI’s Communications VP Scott Peterson takes a shot at MUSE (Musicians United for Safe Energy) for their fundraising event in California to promote safe non-nuclear energy. From Peterson: “Expecting rational energy policy from MUSE is like looking to Senate Majority Leader Harry Reid for the next Billboard hit. In advance of this weekend’s show, there’s other news out of California. A new study shows that increased efficiency at America’s 104 commercial reactors has saved consumers $2.5 billion annually and decreased carbon dioxide emissions by almost 40 million metric tons each year.”

Meredith has two offerings this week.

That Strontium Fish in the Connecticut: Vermont Yankee, Shumlin and the Facts

In this post at Yes Vermont Yankee, Meredith Angwin chronicles Governer Shumlin of Vermont talking about a fish in the Connecticut River that shows low levels (probably background levels) of strontium-90. It might not be SCIENCE to avoid eating that fish, the governor says, but it is COMMON SENSE. This is Shumlin's way of attacking Vermont Yankee without getting involved in all that Science stuff.. And you thought the Know-Nothing Party was dead?

Angwin shows that recent Vermont power purchases, announced with much hoopla, do not make up for the power that will be lost if Vermont Yankee goes off-line.

That does it for this week's selection of nuclear energy blogs. APR is proud to be able to host such a distinguished lineup of authors on a regular basis, and is signed up for a further Carnival next month and will be hosting continuing regular Carnivals for the forseeable future.

The object you saw me holding in my hand was acquired very recently as part of a VERY large collection of papers and books once owned by the late James Vadeboncoeur, whose long and distinguished career in industrial manufacturing included a stint in the nuclear field. During most of the 1950's he worked for Westinghouse, at the Bettis Plant, and was deeply involved in core manufacturing and material procurement and control. He also visited many potential subcontractors' facilities and gave reports to his superiors on their ability to produce many kinds of materials and to perform many kinds of jobs.

Mr. Vadeboncoeur had a much shorter, much less successful stint with Sylvania-Corning Nuclear in the period 1958-1960 when he became that company's Western Region Sales Manager. The company shut its office in California and relieved Mr. Vadeboncoeur of his duties just before Christmas of 1959, with his official termination date in January - six days before he was eligible to enter the company's retirement program.

Enough background... this odd looking object was found in the side of one of SIX bankers' boxes packed totally full of books, manuals, records and paperwork. It was the only object (as opposed to book) of any import in the collection, and it took a couple of days for this author to nail down what it really is. I had a feeling it was some sort of a spacer for fuel elements - after all, this man's career took place "entirely in-core" as it were, so it was not likely to be anything from, say, a steam plant. What was really odd was how LIGHT it was.

Sales manuals for Sylvania-Corning fuel elements began to give indications when I finally dug down to them in the course of the first initial search of the cases. This cover illustration leads down the path to identity for our object: 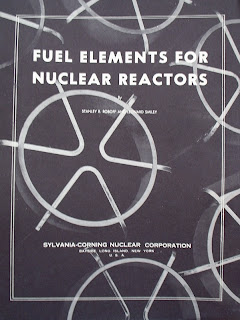 While it is very similar in its end view, it does not match perfectly. The discovery of a pile of identical sales manuals from a bit later on pointed out what this object matches. Here is the relevant illustration from one of these later manuals: 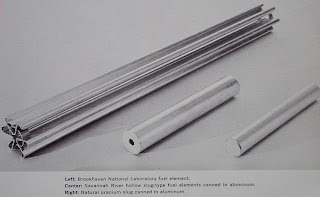 As we see the object matches all pertinent construction features of the Brookhaven National Laboratory fuel element shown here, although it is very much shorter. Obviously this was some kind of display model. Or I hoped it was. (Don't worry - it doesn't give off a click.) Astoundingly, I found the following receipt folded up in a totally separate box, with other papers. Note the arrow I've placed on the illustration for reference. 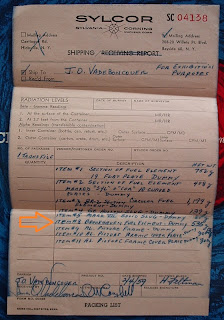 So now we see that Mr. Vadeboncoeur had a kit of shorter-than-standard display samples of various Sylvania-Corning fuel element products that he could show potential customers .. or potential suppliers, and this remarkable receipt survives to prove it.

This design of fuel element was perhaps Sylcor's most widely heralded achievement in a spotty and not too successful run. The Brookhaven Research Reactor was refueled with this new-style highly enriched fuel element developed by Sylcor, which allowed both a much higher neutron flux and a significantly lower thermal output (for our non-nuclear friends, this test reactor was used to bombard test items with neutrons, and was not a power reactor, so that the heat developed was waste energy. This reactor was air cooled.) The plates of this style fuel element were 2.25 inches in width, 24 inches long, and 0.060 inches thick. Each plate contained roughly 5 grams of U235 dispersed in an aluminum matrix, with an aluminum clad applied. As you can see, the plates received bends to form the shapes seen here - on a 1/8 inch radius, resulting in a 60 degree angle at each of the three bends on each fuel plate (one center, one near each side.) The plates were then assembled in groups of three welded to aluminum end rings to form a fuel element; eight such elements were placed in each fuel channel of the Brookhaven Research Reactor.

Now we know what that odd object in my hand is! It certainly makes an interesting conversation piece on a desk.