Beginning with this entry, we will begin combining our regular Fukushima Daiichi updates with other nuclear energy news items from Japan. This will do two things: First, it will make it easier for our readers to locate posts concerning either the accident recovery at Fukushima Daiichi or the situation developing for the future of nuclear energy in Japan. Second, it will simplify and reduce overall posting on the site as the US nuclear industry and regulatory bodies begin to gear up for the two serious tasks ahead, which namely are the development/implementation of Fukushima-related safety measures and the design, licensing and construction of new nuclear plants in the US.

-Cooling injection to the reactors (No. 1, 2, 3) remains roughly as previously reported with units 1 and 2 receiving 3.5 m³/hr and unit 3 receiving 9 m³/hr. Temperatures are stable.

-Nitrogen injection continues at No. 1 and No. 2 plants, but pressure indication for the dry well at No. 2 plant has now dropped down to 15 kPa. TEPCO has flagged this reading as "under constant supervision," which is the tag that TEPCO uses to indicate that a reading is either suspected incorrect or else is correct and indicative of some other problem. Keeping in mind the suspected damage by hydrogen burn to the dry well / suppression chamber of No. 2 plant, it is of course easily possible that the nitrogen is leaking out at any uninspectable point. Preliminary connecting work for the nitrogen injection to No. 3 plant dry well has begun. TEPCO has five days to meet its own goal for nitrogen injection being in progress at all three reactors.

-As reported before, and frequently in Japanese media, the decontamination / desalination plant continues to have minor failures - which are then fixed, seeing the plant return to service. Total accumulation of extra amounts of contaminated water is minimal compared to previously since the system is operating more than it is not.

-Heavy work continues at No. 1 plant to install the reactor building enclosure. Parts of the base have been assembled preliminarily at Onahama for checkout: 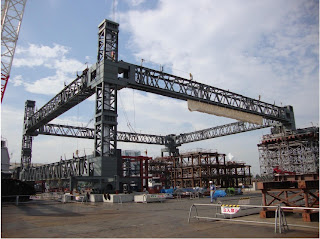 Further, the giant construction crane to erect the structure at No. 1 plant is frequently visible on the FUKUICHI LIVE CAMERA:
http://www.tepco.co.jp/nu/f1-np/camera/index-j.html

-Surveys to determine radiation fields and exposure rates continue sporadically at No. 2 and No. 3 plants. A cursory review of the surveys and levels discovered reveals nothing surprising to this writer at this time in terms of fixed or solid contaminanation and radiation therefrom, but there is a high airborne level in No. 2 reactor building, some 65 times the limit set by NISA.

-While Kyodo News has reported that over 50 utility workers were involved in the e-mail campaign to POSSIBLY influence the public view on the restart of Genkai, NHK is now reporting the total to be over 100 workers. A Kyushu Electric internal investigation will be submitted to the Japanese government within one week. The mayor of Genkai has withdrawn his approval to restart the plant.

-Two reactors in Japan -- Hokkaido Electric's Tomari-3, and Kansai Electric's Ohi-1, have been operating at various power levels in testing modes for several months, much longer than normal, according to NHK. NISA and the operators are presently rapidly moving to get the final testing performed so that the plants can be brought on line.

-There are some vague initial reports that JAPCO's Tokai Daini station may have suffered some equipment damage in the Great East Japan Earthquake. There are reports of both primary (safety injection) and secondary (main turbine) damages possible caused by the quake. The reports are very preliminary; we will remain attentive for further developments at this site.