-TEPCO has repaired and tested the spent fuel pool cooling and filtering system setup at No. 4 plant and found it to be sound.

-TEPCO has sent personnel into No. 3 reactor building, instead of a robot, to prepare a connection to inject nitrogen to No. 3 plant's dry well. The photos appear to show a large snap-type Hansen (or Swagelok, etc) coupling. 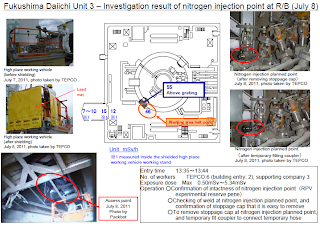 -NHK is reporting that it has obtained a not too widely circulated time frame outline for the entire plant recovery that details core removal in ten years.

-Preliminary assembly of No. 1 reactor building's cover is underway at Onahama, and the large crane at Fukushima Daiichi is now frequently seen in the live camera view.