Atomic Power Review is very proud to host, for the first time, the rotating Carnival. This feature presents the very best of the pro-nuclear blog writers, who write from all angles and perspectives. Some of the blogs are quite specific, having been founded around one particular technology, plant type or even plant site, while others are very broad. The authors comprise a range of people with an aggregate of great experience in an equally wide range of fields. Those who are used to reading only the work of the normal "go to" people that the mainstream media uses as experts will find the selection of blogs presented here of great interest, and in great contrast to the usual fare. The content of the rotating Carnival as well as the rotation itself are transmitted and discussed courtesy the American Nuclear Society's Social Media List.

For our nuclear friends; Can you guess what this photo is of? From the APRA collection; UPI Wire Photo. The answer follows the Carnival entries; click to enlarge. 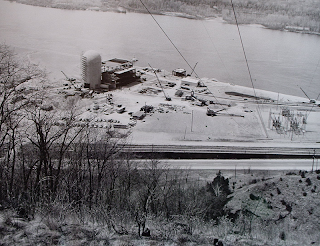 The future of as many as eight new reactor new builds in the U.S. will be determined by a single regulatory action at the NRC. This is the design certification of the Westinghouse AP1000.

Anti-nuclear groups want to tie it up in knots because of the downstream leverage success would provide to their cause. Will they be successful? It all depends on the “leadership” of NRC Chairman Gregory Jaczko. So far he’s has been almost downright hostile taking the extraordinary step of issuing a press release last May critical of the Westinghouse submissions for design certification.

1. Nuclear Industry Subsidies Part IV: Conclusions on Koplow
This is Part IV of my review of Doug Koplow's "Nuclear Power: Still not viable without subsidies." In Part I, I examined the definition of subsidies and looked at several limiting cases, including subsidies to an energy related project, the Cape Wind Project. Par II focused on Government policy toward the domestic Uranium mining Industry, and the National Defense context of that policy, and questioned both the intended and actual benefit of these policies for the nuclear power industry. Part III examined the relationship between United States military interest and the interest of the Nuclear power industry, and concluded that the relationship between the two had not served the interest of the Nuclear Power Industry. Part IV finds that "Much of what Koplow views as government subsidies to the nuclear power industry are not subsidies at all, but he is correct that the relationship between the nuclear power Industry and the government is an important area for study.

and...
2. Google.org is still confused about paths to the energy future--Google, through its philanthropic endeavor, Google.org, does not have a very good track record for predicting the future. Under Google’s model, neither the application of a $30 per ton carbon price nor a more robust set of policies and mandates to drive cleantech adoption can reduce emissions as effectively on their own as when they were coupled with breakthrough innovations that drive cost declines. In its latest account of the energy future Google.org ignores the potential game changing impact of small reactors and generation IV nuclear technology.

In this post, Meredith Angwin shows how the Vermont Attorney General is grandstanding by announcing that he WILL announce his decision about bringing criminal charges against Entergy. The AG timed this set of announcements for the period in which a federal judge is deliberating Vermont Yankee continuing to operate while lawsuits are resolved. Angwin describes other lawsuits that the Vermont AG has brought to the Supreme Court---and lost.

Meredith adds: The AG decided not to bring criminal charges, as described in her later post. No Criminal Charges

Rick says: "I am making an unsubstantiated claim and the viewer needs to understand that this is more than just a reaction to antinuclear statements to the contrary it is also an appeal to your common sense. Don't believe everything you read especially if the window dressing is neat and clean. I mean talking heads with great looking news sets and manicured anchors in suit and tie are no reason that they should be more credible than any other non-expert."

DEREGULATE THE ATOM - JAPAN WILL SPEED UP DEVELOPMENT

There are many terrific reasons to favor the rapid development of nuclear fission technology, including the fact that nuclear energy is an important climate change mitigation tool.

For some odd reason, possibly having to do with certain brands of political ideology, many nuclear professionals are reluctant to emphasize that last feature. They count themselves as climate change skeptics. Utility companies that operate both nuclear and fossil fuel plants have a strong economic incentive for not directly comparing the effects of their fossil plants to the lack of effect of their nuclear plants because they do not want to redirect the ire of protesters from one of their facilities to another.

I have a different point of view.

Germany is set to turn back to coal, gas and imports to fill the
energy chasm left by its fast-track exit of nuclear power.
Germany produced 140.6 terawatt hours (TWh) of nuclear power in 2010.
Germany produced 102 TWh from renewable energy in 2010, and they are
targeted to add 115 TWh by 2020. Even 9 years from now Germany will
still not have replaced all nuclear power with renewables. Some
Uranium projects in Ukraine and Kazakhstan. The French Astrid breeder
reactor.

NEXT BIG FUTURE - GERMANY WILL USE MORE COAL, OIL, GAS

and...The US is joining the Wendelstein 7-X Stellerator fusion project in Germany.

The final installment of my three part series on lessons learned from Fukushima. In this post, I examine political lessons learned, including regulatory independence and government interference. We should learn from this, but not necessarily the lessons that some would wish. An independent regulator is critical, but does not preclude hiring from industry, nor the other way around. And government leaders need to keep their responses measured, both domestically and internationally.

And finally, last but certainly not least we have this week's entry from the American Nuclear Society's Nuclear Cafe - All Things Nuclear blog.

Dan Yurman discusses several recent positive developments in the
nuclear renaissance, from around the world and in the USA.

ANS NUCLEAR CAFE - SOME GOOD NEWS FOR A CHANGE

That's it for the 60th Carnival of Nuclear Bloggers. APR is already scheduled to host two further installments; the 64th on August 5th and the 69th on September 9th, with more sure to follow. I hope my regular readers who are not normally visitors to the above quoted and linked blogs find something of interest and return to them in the future.

The answer to our "What is this" photo... 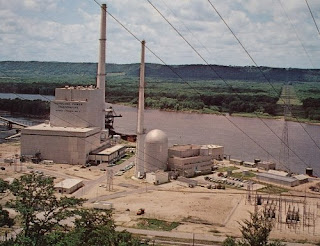 Above, a years-later post card photo, APRA collection. This plant was officially known as Dairyland Power Co-Op's Genoa No. 2 plant, but it's better known "in the business" as the LACBWR or the LaCrosse Boiling Water Reactor. Built as part of the second round of the AEC's Power Demonstration Reactor Program; the reactor vendor was Allis-Chalmers. That's the much larger coal-fired Genoa No. 3 next door - which obviously wasn't there in the 'under construction' photo.