According to World Nuclear News, the company known as Generation mPower, on which APR has reported before and which is jointly owned by Babcock & Wilcox and Bechtel has signed a letter of intent with the Tennessee Valley Authority to build as many as six of its modular PWR plants, rated tentatively at 125 MWe, at a site formerly cleared for the long-abandoned Clinch River Breeder Reactor. 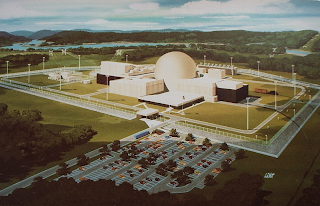 The private sector companies involved in this project, Babcock & Wilcox, and Bechtel Corporation, are no strangers to those familiar with nuclear energy. Babcock & Wilcox was one of the four largest commercial reactor vendors, receiving its first commercial plant order for what became Indian Point 1 in 1955 and receiving the contract for the nuclear plant for the N.S. Savannah in 1956.

B&W then spent a number of years without receiving any further orders as a reactor vendor per se but continued to construct major components for many nuclear plants, especially pressure vessels. Finally, in 1966, during the first flood of nuclear plant orders, B&W received its first orders for what it termed at the time to be its "second generation" plant designs - the first being two units for Duke Power (these became Oconee 1 and 2) in July 1966 and then Met Ed's order for Three Mile Island 1 in November of that year.

B&W's last orders for new plants were received in 1976; according to B&W's 1975 edition of STEAM, the company had sold 29 of its second-generation design plants and that 24 of them "were in the process of detailed design, fabrication, installation, testing, or operation." Five of these were at that time in commercial operation, with a sixth undergoing power escalation testing, according to this volume.

None of the plants ordered later than 1968 were ever completed. Some of these later plants were the advanced BW-205 design with more fuel elements, higher power (3760 MWt) and raised loops to allow natural circulation cooling. (Although as one reader points out, Davis-Besse does have elevated loops..see the 'comments' section.) Of the completed Babcock & Wilcox plants, Three Mile Island 2 suffered an accident in 1979; Rancho Seco was shut down in 1989. This leaves the following operating plants: 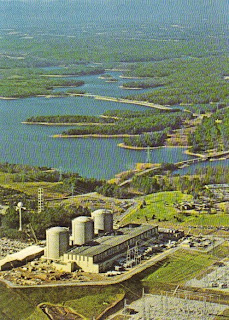 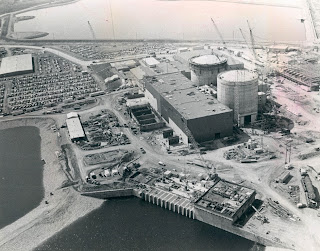 Above, wire photo in APRA collection showing the Midland Nuclear Station in May, 1978. This two-reactor station, with B&W plants that were the first to be designed to provide both process steam (to Dow Chemical Corporation) and commercial electric power (Consumers Power Company) suffered massive problems with buildings settling unexpectedly, problems with reactor vessels and financial problems, finally being cancelled in 1984. Item: An unused reactor vessel head on this site was later shipped to Davis-Besse for use on that site's B&W plant.

B&W, shortly after the TMI-2 accident, stopped offering for commercial sale any new reactor plants, so that this project through Generation mPower is its first as a reactor vendor in many years. The modular reactor concept isn't new to B&W either; it was shopping around a small compact NSSS in the late 60's which actually was built in modified form for use in the German nuclear ship Otto Hahn, and was built in Germany by a B&W license arrangement so that it is not wholly improper to say that B&W design plants powered 2/3 of the free world's commercial nuclear shipping... namely the NS Savannah, and the Otto Hahn.

COMING IN PART 2: Some background on TVA.