Developments of note at Fukushima Daiichi over the last two days...

TEPCO has begun operations with the previously mentioned system to remove contaminants from the seawater which is inside the breakwalls, and silt fences, in order to help prevent spread to the outer waters.

TEPCO has also begun intermittent operation of the first system set up to decontaminate water in the various onsite buildings. Various parts of this system, pictured previously on this site, are being tested separately and then in conjunction, first using plain water and then using low-level contaminated water. TEPCO's plan indicates that the whole system is to be in operation decontaminating water by the 18th of June, if all goes as planned. This system, contracted to Kurion, is only the first; the larger and more capable system contracted to AREVA has not yet begun construction.

Contaminated water is being pumped from No. 3 reactor building to the rad waste storage facility as this is written. This is part of the ongoing general move to get access to the turbine buildings at all three affected plants in order to restore cooling.

Water injection to the reactor cores at all three affected plants continues essentially as before, using the feed lines and at roughly the same rates. However, temperature on the No. 3 plant, which had been rising steadily, has now begun to decrease again with the most recent pressure vessel lower head temperature reading we have being about 161C which is ten degrees or so lower than when we last updated on this site. Water injection at this plant is actually down very slightly to 11.2 cubic meters per hour at last measurement.

In the interest of completeness, as we've detailed before, work continues at No. 2 and No. 3 plants to gain access to the reactor buildings to install new water level and pressure gauges, and to allow for nitrogen injection to the dry wells. To this end the atmospheric work at No. 2 continues, while just recently TEPCO used a concrete pump truck to extend a sampling probe over the No. 3 plant's reactor building. TEPCO press photo of this operation is below. 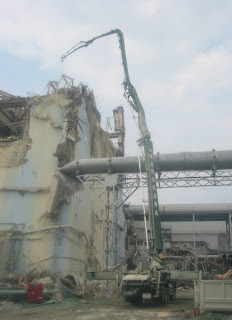 According to TEPCO, today a remote helicopter was used to conduct further detailed surveys around the No. 1 reactor building as serious preparation work is now underway to construct the temporary contamination shield cover for this building. This is the first of two different types of enclosures that will eventually cover all of the reactor buildings on site; first, this temporary style and later a much sturdier and heavier type which will be that which encloses the buildings while the reactors are opened and defueled.

The preparation for installation of these first style enclosures is fairly elaborate. In addition to surveys on the ground, TEPCO has, as mentioned, used air surveys and laser imaging to obtain exact dimensions. Here are two images showing steps in the laser imaging and dimensioning process, from TEPCO press releases. Both show No. 1 reactor building. 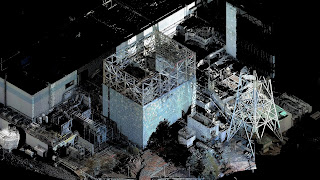 Above is an external view of the reactor building of No. 1 plant as it is now, and below is an image with the new enclosure added. Click both to enlarge. 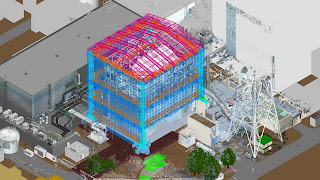 Below is a VERY large image (when clicked) of the reactor building enclosure, which is exceedingly well detailed and worth close examination. 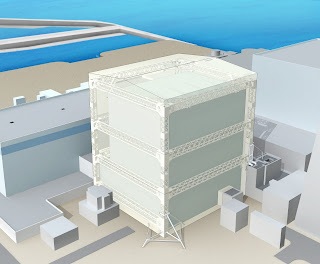 Below is a scale model TEPCO and its contractors have developed of the reactor building first style enclosure. Again, courtesy TEPCO. 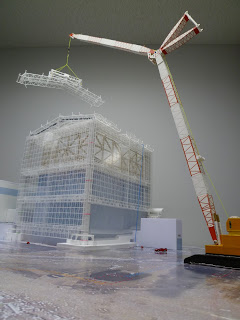 And finally we have a TEPCO press photo of an actual reactor building enclosure being test assembled at Onahama port, in practice for installation at the Fukushima Daiichi site. Shortly at the Atomic Power Review YouTube Channel we will have some TEPCO press release videos showing the survey and construction process for the erection of these first-style reactor building enclosures. Click here to see the APR YouTube Channel.

UPDATE: Just added this morning is a new TEPCO video showing the radiation survey work inside No. 3 reactor building on June 9th. Look at the APR YouTube channel now to see it. Link above, and always in red on the right of APR's page.
Posted by Will Davis at 9:09 PM