It has been three months since the Great East Japan Earthquake today. Also, then, as a result three months since the initiation of the Fukushima Daiichi Accident by the tsunami which resulted from the earthquake and which inundated the site. The tsunami then caused what in many quarters is recognized now as the classic long-term SBO event but extended to a point not previously imagined without either AC or DC power on site, and with further equipment derangement than generally imagined due to the tsunami waters which overran what had been assumed to be worst-case-preventive defenses. Accident recovery has been hampered by the hydrogen explosions in the reactor buildings, which from the explosion in No. 1 building led to many further site complications due to debris from one plant interfering with actions at other plants, thus causing a complicated interrelation of cause and effect sequence and decision making not perceived as probable in design basis accident analysis. While many of the events on site have actually been exactly predicted -- even down to roughly the hour or two hour event times -- by previous accident analysis studies (mostly under the auspices of Oak Ridge National Laboratory) many of the complicating factors were not. Just as TMI-2 led to a re-evaluation of how many seemingly unrelated existing flaws both in personnel and equipment can lead to an accident that essentially fills a DBA scenario without being a classic DBA event, so now does Fukushima Daiichi cause the nuclear industry to widen its scope particularly and thoroughly on multi-reactor nuclear generating sites where the reactor plants are closely spaced, or worse, immediately adjacent. This is not by any means the sole area to be studied, but it fairly jumps out at the investigator at even the most cursory examination. With that, here are the most recent details from Fukushima Daiichi.

TEPCO is now testing its large water purification facility, assembled over the last week or so. TEPCO still intends to have this equipment functioning within the next week.

Water injection rates to the reactor plants remain unchanged. Temperatures at No. 1 and No. 2 plants are stable, but No. 3 continues to drift upward, with bottom vessel head temp at last report being 189.2C (372.6 F).

Today, in the effort to gain working access to all reactor buildings for restoration of pressure and water level detection, and restoration of spent fuel pool systems, TEPCO finally opened up the double air lock doors at No. 2 plant and began working on filtering the air. In No. 3 plant, gamma camera surveys were conducted to map out the areas of high radiation in preparation for the aforementioned events and for the preparations for nitrogen injection to the primary containment. Areas of up to 10R/hr were found in No. 3 plant's reactor building. Nitrogen injection to No. 1 plant still continues, only rarely interrupted due to outage or nitrogen generator problems so that at the moment TEPCO estimates that over 43,000 cubic meters of nitrogen gas have been injected to the dry well for the purpose of inertion (against hydrogen gas combustion / explosion.)

Personnel have entered No. 4 plant as noted earlier to support the spent fuel pool, and some new TEPCO press photos are now available. These were taken on June 9th and 10th. First, the fourth floor view: 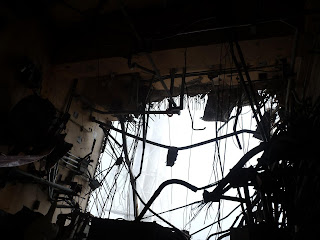 Next, water treatment equipment in No. 4 reactor building. 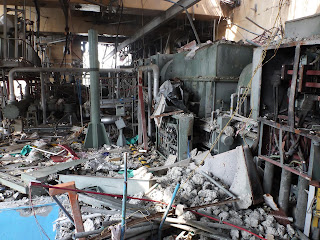 The damage seen above is considered by TEPCO to be serious enough to hinder its attempts to restore the original spent fuel pool systems for the purpose of cooling the spent fuel pool. Not only is there debris everywhere, but there is also piping damage that TEPCO apparently had expected not to find.

TEPCO continues to bring in water storage capacity as rapidly as possible. The large tanks mentioned on this site a short while back are now arriving on site and are being mounted and connected. First of our two TEPCO press photo displays is one of the tanks during the night-time shipping routine, chosen to avoid obstruction of roads and thus daytime traffic. 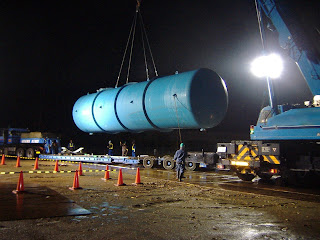 Below, the installation of the tanks at the Fukushima Daiichi site. 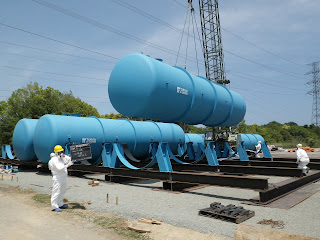 These are the most important confirmed details at the moment. More to come.