There are a number of updates from the Fukushima Daiichi site to relate. None serious, but several noteworthy ... if only due to their being carried by major media outlets. We'll relate these things and put them in perspective.

-Radiation levels in the seawater outside the No. 1 through No. 4 plants have gone up somewhat in recent days, and water levels in the turbine buildings have been reported as rising faster. There is a typhoon in the vicinity which has been causing a lot of rain (as viewers of the Fukuichi camera and its predecessor can also assert) and it's speculated that this is one major cause for spikes in readings of some isotopes immediately offshore. As a response to this, and further as a hedge against the threat of running out of temporary contaminated water storage capacity, TEPCO is going to quickly install a filtration system for water in the area outside No. 1 through No. 4 plant seawater inlet gates, which is all inside the silt fences previously installed. Below is a TEPCO press release illustration showing one of the filtration tank units (supplied by Toshiba) and the general expected setup. 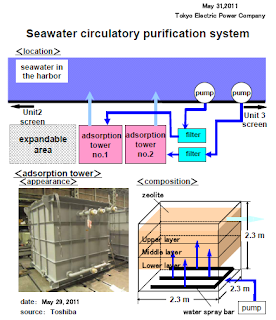 And just in, off the TEPCO wires.... this view taken today of one of the tanks actually installed and connected: 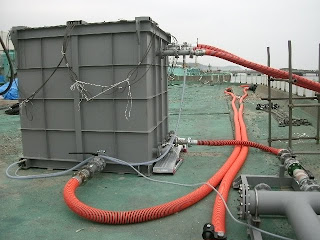 -Injection rates at the three reactor plants with cores installed continue to be decreased by TEPCO, as TEPCO both transitions over from the use of firefighting supply lines to the feedwater lines, and attempts to optimize injection rate to only that required for safe cooling to reduce water buildup in the reactor and turbine buildings. No. 1 plant is now at 5 cubic meters per hour, while No. 2 is at 4.9 cubic meters per hour; both are operating with injection only on the feed line. No. 3 plant is also only on the feed line and now is down to 11.5 cubic meters per hour. Temperatures at all three plants are slowly lowering as of now; readers are referred to the decay heat graph posted on this blog a few days back for comparison of the inferred heat generation decrease over time with the lowering cooling water injection rates.

-Remotely controlled construction equipment accidentally damaged an oxygen storage cylinder in the vicinity of No. 4 plant the day before yesterday. No one was injured; incredibly, there are still images floating around the net from the new Fukuichi 24-hour onsite camera that show the blast. Dramatic, if small, the blast caused no damage which has been reported by TEPCO or its contractors.

-There is a report circulating that while TEPCO told the Japanese Government that it had suspended seawater injection to the core of No. 1 plant at Fukushima Daiichi in the serious hours immediately after the typhoon, an on-site supervisor in fact made certain that seawater injection continued uninterrupted. (Government permission was required for this step, and there was uncertainty about it having been received, apparently.) While this caused a bit of a media stir in Japan, Prime Minister Naoto Kan has gone on the record as saying that this should not result in punishment of this particular supervisor. (He made the right call, by the way, in continuing injection with whatever water source he had available without outside non-expert interference.... APR opinion.)

-A brief oil spill outside No. 5 and No. 6 plants, found on the 31st, has resulted in the application of cleanup material (absorption) to the shore line, and the rapid installation of an oil fence. TEPCO is cleaning up this minor spill as this report is written. Below, TEPCO press photo showing the oil sheen on the water surface. 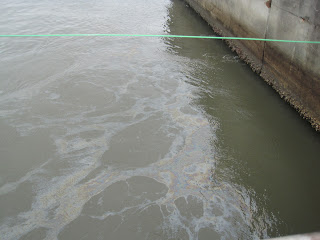 These appear to be the most important updates at the moment. There are a large number of projects underway right now at the site, and we'll report here on further developments as needed.