In one of our previous discussions concerning the nature of reactor plant containment, we made considerable effort to detail the very early history of the types of containment applied to boiling water reactors and gave a good deal of detail on that built at Morris, Illinois for Commonwealth Edison's Dresden Nuclear Power Station. Look here to see this previous post on Atomic Power Review.

Did you know that the original design for this station was very different? It was. The original design, developed during an evolutionary process that lasted several years, was first revealed in late 1955 after GE and Commonwealth Edison announced the project officially in April 1955. The original design for the Dresden Station included the construction of one very large 200 foot diameter steel sphere to contain not only the reactor, but the generating equipment and even the control room. Let's look at some early illustrations from 1955 that show the plant's original conceptual design. 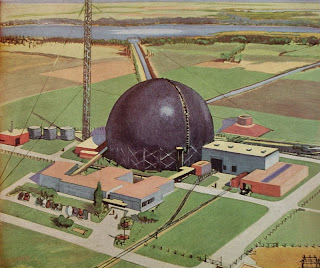 Above, late 1955 GE official illustration showing the originally conceived layout for the Dresden Station. Note that there are only fairly small support buildings outside the large sphere. The next illustration shows why this is the case. 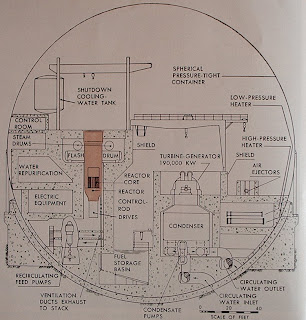 This remarkable cross section view (click to enlarge, as with all photos on this site) shows clearly that not only the reactor and its secondary loops but also the TG and control room are inside the sphere. This is slightly reminiscent of the design actually constructed at Punta Higuera, Puerto Rico by General Nuclear Engineering (later, Combustion Engineering) for the BONUS nuclear superheated steam plant in that the generating equipment is inside the containment. 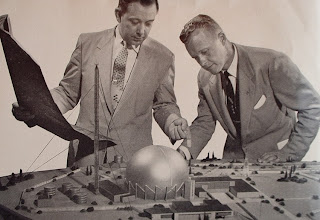 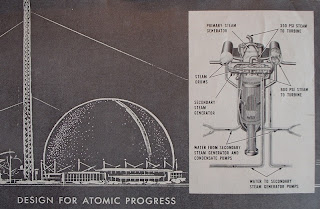 Here we see a more stylized late 50's art version of the plant, and a cutaway of the original design of the reactor pressure vessel, and the "flash tanks" that were to have been used to produce secondary steam in this original design.

As we know, this design does not match that which was actually built. GE and the architect-engineer firm, Bechtel Corporation, moved not only the turbine generator but the control room outside of the containment. The giant sphere ended up being 190 feet in diameter, with the equator of the sphere 56 feet above plant grade level. According to the 1959 ASME volume "Nuclear Reactor Plant Data, Vol. 1; Power Reactors" the internal design pressure was 29.5 psig and a temperature of 250F. The sphere was reinforced against all external weather such as snow, ice and wind and was reinforced to withstand an external load of 1 psig. Thickness of the plates used to construct the sphere varied from 1.25 inches to 1.40 inches.

Here we begin to look at Dresden Nuclear Generating Station (now known as Dresden-1 since two other plants were built on site later) as it was actually built. First is a Bechtel advertising illustration showing an artist's concept of the finalized design. 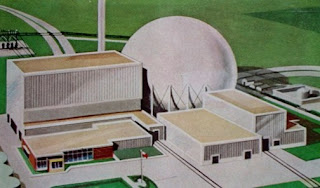 Construction began March 1, 1957 with the heavy excavation and construction starting in June 1957. Below is a large and impressive photo of the plant while under construction. 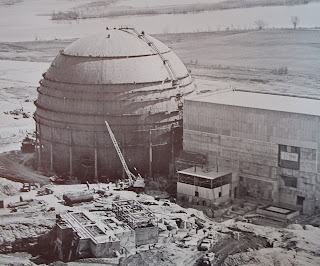 Dresden Nuclear Generating Station's reactor was first made critical in October, 1959 and achieved full rated power (626 MWt) in June, 1960. Below is a scene at the official dedication on October 13, 1960. 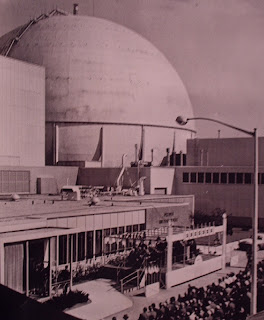 Below, a nighttime shot of Dresden-1 after commissioning. 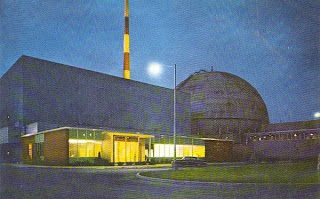 A booklet covering the station is in the APRA collection; below is the cover. 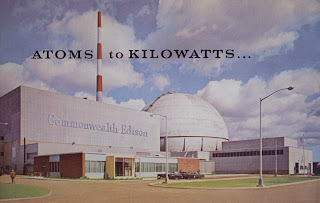 From the inside of the booklet is this illustration showing the plant layout as built. Note the very different configuration of the reactor plant, and the very high orientation of the steam drum above the reactor, with piping to and from it either side of the refueling hall.

We'll be doing many more of these retrospective features in the future, with many different plants covered.