The Japanese media outlets are reporting a downgrading of the condition of the reactor pressure vessel, in estimation, at Fukushima Daiichi No. 1. Now, TEPCO is saying that a serious leak in the pressure vessel has prevented the water from rising any higher even with the increased injection rate. The water, as guessed a number of times, is probably going to the primary containment.

Below, TEPCO press photo inside No. 1 reactor building, during inspection and calibration of Water Level A indicator (fuel zone.) 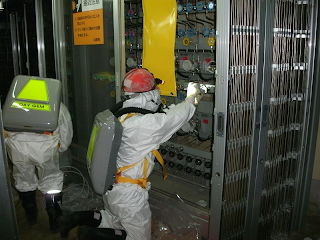 Both TEPCO and NISA have apparently now decided that some fuel melt and relocation to the bottom of the pressure vessel has occurred, but also indicate that ccoling of the fuel in No. 1 plant is adequate for the moment. I speculated a long time back here on this blog that it was conceivable that fuel melt had occurred, relocation had occurred, and that perhaps failure of one or more reactor pressure vessel bottom head penetrations had occurred. However, many other experts (including the US NRC) felt that the fuel was still located in the normal area, i.e. above the core support plate and this became the assumption everywhere. It may in fact be that I was correct all along. We shall see.

I would just add that many simulations and investigations by ORNL and others into serious core damage events at BWRs predict such bottom head failures, or else failure of the pressure vessel circumferentially in some cases. Regardless, what TEPCO is essentially saying is that the leak rate is sufficient, given the newly operable water level indicator. We don't yet have a solid number, incidentally, for the water level; one media outlet is saying that the water level isn't even indicating there is water in the pressure vessel any higher than one meter below the bottom of the normal fuel zone. This could conceivably indicate a serious breach in the recirculation piping (breakage, failed pump seals, or both) or a leak in the lower head. It is of interest that the outlet nozzle for the recirc piping is slightly below the level of the core support plate... if the drawing we have here for this reactor is correct.

There are sure to be more details released as TEPCO and NISA decide on any changes in the course of action... but for now, the plan should be the same: flood the dry well.