The "mega-float" barge which has been modified for use by TEPCO for the storage of contaminated water has apparently started toward the Fukushima Daiichi site. The TEPCO press photo (seen below) is of one of the two USN freshwater barges leaving Fukushima Daiichi under tow; perhaps this is to clear the dock space for the mega-float. 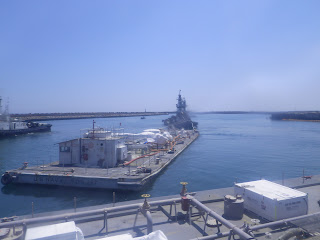 The massive "mega" barge had formerly been used as a type of floating park, with shelters on the top and even what appeared to be a concession stand. All of this was removed, and a crane is now topside. Below, the internal bulkheading of the barge was modified per TEPCO direction to better adapt it for its new service.

Below is the mega-float as it looked when arriving at Yokohama. 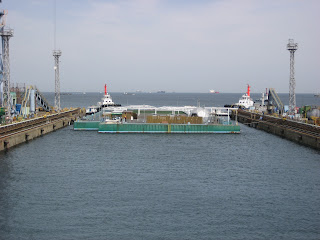 And, below is the mega-float on March 15th. 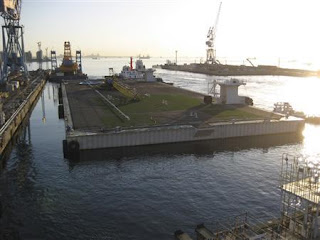 In other developments, according to Japanese news sources, while several men did in fact enter the No. 2 reactor building to perform an inspection (determine physical condition of structure and access, condition of equipment, survey for restoration of the water level indication, etc.) the men were forced to leave the reactor building after only 14 minutes because the building is full of steam. This was exactly the problem that halted robot inspection of the building a while back; the robot's camera lens fogged and the operators backed it out the way it came in. Of course, we must assume this steam is coming from the reactor pressure vessel originally, and then is being released though who knows what possible release path. TEPCO's assumption for a long time now has been that there was an internal explosion which damaged the primary containment vessel. Hydrogen is the leading culprit, but a steam explosion is also a remote possibility. Surely now there's no doubt that the primary containment is in one or more locations, and in one or more ways, compromised. This will make recovery of the No. 2 plant much more complicated.

Dual injection paths continue in use at No. 3 plant, and temperatures continue to lower slowly.

Finding the issue with pressure vessel integrity at No. 1 plant, and suspecting strongly (and I agree) that similar situations would exist at the other two plants in question, TEPCO has revised its concept for recirculating cooling. TEPCO will use an essentially open-loop cooling circuit with buildings used as hot/contaminated water reservoirs which will then be tapped by the cooling system. The water will be cooled, filtered and then pumped to the reactors through the feed systems. TEPCO illustration below shows this setup schematically. 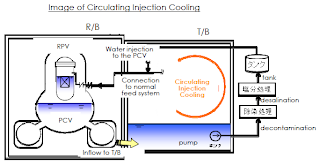 There is no exact date for this work yet; TEPCO has not even seriously entered No. 2 and No. 3 turbine buildings yet to survey the equipment, according to latest reports.

TEPCO is working on a very massive report to be released soon; the report already exists in Japanese. This report (which I've seen) has very many primary parameters from actual recording equipment taken from right before the quake to as long as the equipment ran. While this isn't out yet, TEPCO did release some illustrations of one specific strip chart recording for each plant showing reactor pressure and reactor water level. The water level didn't record for No. 1 plant, but it did for the other two. TEPCO's illustrations are below, and are self-explanatory except for two things: First, "scrum" should be "SCRAM." Second, the strip charts read from RIGHT to LEFT, so follow the numbers.

Interesting to note is how long the recording equipment operated at No. 3 plant.. apparently a good deal of time after the tsunami.. while the parallel type of equipment ceased fucntioning at No. 1 and No. 2 plants at the time the tsunami hit.

Below, a TEPCO illustration that applies to their No. 1 plant showing what some of the different water level indications normally available are, and how the indicating ranges overlap each other. This is the first exactly specific diagram like this we've seen from TEPCO, and if they appear for the other two plants I will post them as well. 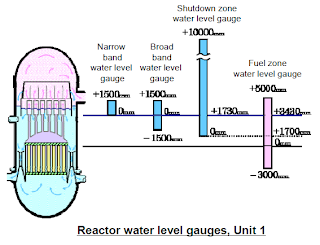