The recent events of this week seem to have blown the almost hourly reporting on Fukushima Daiichi by major news sources right off the front pages, or right out altogether. While there is nothing at the moment breaking or emergent in terms of news from Fukushima Daiichi, we'll provide a more thorough update than we would have considering the major reduction in coverage the situation is getting right now. In fact, this might be the breaking point in this news story world wide; at some point, every nuclear crisis (or every other news worthy event) gets pushed away by something newer, and we wonder if this isn't the first step toward that end in the case of the Fukushima Daiichi accident. Keeping that in mind, here are a number of new and ongoing news points in no particular order....

--TEPCO appears to have increased, very slightly, the injection rate at one of the Fukushima Daiichi reactors, from roughly 7 to roughly 9 cubic meters per hour as a result of a temperature increase. The story from TEPCO is quite incomplete. However, this is a minor adjustment and is a tweak, not an emergency. We believe this is at No. 1 plant.

--TEPCO has begun spraying wide areas of the plant with a remote controlled tracked vehicle carrying a tank and sprayer for the dust inhibitor. We believe now that this is the vehicle we showed a picture of before, or is at least very like it. Let's take another look at that picture: 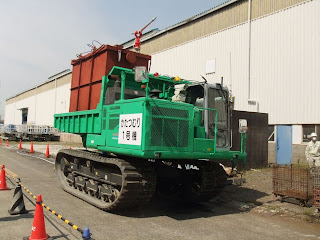 This, along with spraying by personnel which also continues, constitutes a major increase in the use of this principle to make accessible a much larger area of the plant to aid in the recovery. Of course, daily removal of up to four large containers of rubble from the site also continues.. also by remote controlled equipment which we've also covered thoroughly before on this blog.

--On May 2, NISA issued an instruction to TEPCO to report to it on the need for the air filtration plan in No. 1 plant's reactor building. TEPCO then made that report on May 3. The report includes both requested information on the actual plan and on the equipment itself. We will see soon if NISA has signed off on this plan, as if they did not, TEPCO will change their plans.

--Similarly NISA instructed TEPCO, on April 30, to submit a complete report on possible deleterious effects of filling the dry wells of the reactor plants up to the normal height of the top of the fuel bundles. There is not yet a note from NISA that TEPCO has submitted this report, although we note that this will take a lot longer than the reactor building airborne contamination reduction report we just described. There are some further points in a NISA release wherein NISA describes more briefly this time what it needs from TEPCO regarding the filling of the dry wells. Here are NISA's summarized points for review:

・ April 30 - NISA instructed TEPCO, pursuant to the provisions of Article 67, paragraph 1 of the Nuclear Regulation Act, to submit a report on the impact on stable cooling of the reactor and the following safety evaluation regarding the implementation of the measure to fill the Primary Containment Vessel (PCV) of Unit 1 of Fukushima Dai-ichi NPS with water up to the level above the reactor fuel.

 The impacts on structural strength and seismic adequacy of the reactor building (RB) and the PCV with the rise of the water level of the PCV.

 The impacts of rising pressure inside of the PCV due to the rise of the water level.

 The impacts caused by the increase of water leakage from the turbine building.

--Over a span of three hours, TEPCO pumped about 114 cubic meters of water out of No. 6 plant's turbine building into a temporary storage tank.

--TEPCO has announced a plan for active (i.e. pumped) water filtration of the area inside the innermost breakwall near the seawater intakes, using piping and a tank filled with zeolite. This should help cut down any activity leaking from this area to sea... already blocked off by silt fences and steel barrier plates.

--Shareholders of five different electric utilities in Japan which operate nuclear power plants intend to try to halt nuclear plant operations by proxy fights. TEPCO is faced by about 400 stockholders who want its plants shut down; shareholders of Tohoku, Kansai, Chugoku and Kyushu have also voiced similar proposals. At this moment, there are no clear indications that any of these shareholder groups have anything like the number of votes necessary to get this done. But we all knew it was coming.

--TEPCO intends to send workers into No. 1 reactor building on Sunday, assuming the air filtration setup works, to begin preparation for the installation of the new "add on" external reactor cooling system.

THIS IS ABOUT ALL THERE IS AT THE MOMENT. We will update on these story points when any of them changes significantly or when it's appropriate, and of course cover any other major developments at Fukushima Daiichi as we've been doing.