TEPCO has discovered a leak of contaminated water into a pipe trench, or pit, almost the same as happened at No. 2 plant but this time the discovery has been made at No. 3 plant's seawater intake area. Below is TEPCO's illustration. 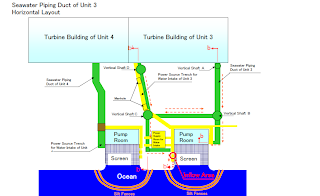 The last time this happened, TEPCO was forced to inject what it called "liquid glass" into the area around the pipe trench, at Unit 2 in a similar location. This is not to say that this leak path is identical. NISA has instructed TEPCO to analyze the leak source and stop it as fast as is possible, and to examine impact on the seawater. TEPCO will certainly move rapidly on this, given the known contamination levels of the various bodies of water inside the plant buildings and the impact that a similar leak from No. 2 plant's pipe tunnels had on the level of contamination of the seawater outside the plant.

Speaking of No. 2 plant.... here is some text from TEPCO in a press release, which recounts those events at No. 2 plant about a month ago for review:

TEPCO: "At around 9:30 am on April 2nd, 2011, we detected water containing
radiation dose over 1,000 mSv/h in the pit where power supply cables
are stored near the intake channel of Unit 2. Furthermore, there was a
crack of about 20 cm length on the concrete lateral of the pit, from
where the water in the pit was outflowing to the ocean. At around 12:20
pm on April 2nd, we reaffirmed the event at the scene.
We have implemented sampling of the water in the pit, together with the
seawater in front of the bar screen near the pit. These samples were
sent to Fukushima Daini Nuclear Power Station for analyses.

At around 5:38 am on April 6th, we have observed stoppage of spilling
of water to the ocean from the crack on the concrete lateral of the pit.

Since April 5th we have been conducting sampling surveys of the water in
the pit and the seawater in front of the bar screen near the pit.
Regarding the survey results of the detection of three nuclides
(iodine 131, cesium 134, cesium 137), we report those as definite results.
As for other nuclides, we will reevaluate in accordance with the
preventive measures formulated after receiving a warning from Nuclear
and Industrial Safety Agency (NISA) on April 1st."

Judging from these previous actions, then, TEPCO should be able to get this newest leak stopped in several days.

In other Fukushima Daiichi news.... TEPCO has begun adding Hydrazine to the water being injected into the spent fuel pools to halt corrosion.

Feed nozzle temperature at No. 3 plant was about 192C at 6 AM on the 11th; the latest figure is 214.5C at 11 AM on the 10th. This increase is beginning to look worrisome; TEPCO needs to accelerate its efforts to cool this reactor plant. Looking at data from JNTI, the rate of increase is itself increasing.

Finally.. work continues at No. 1 plant to get both water level indication and pressure indication back for the pressure vessel. So far none of the technical sources has reported anything other than the previous data (water level still stuck reading -1650mm) so we'll assume this work hasn't been successful yet.

UPDATE 12:25 PM Eastern: TEPCO has stopped the leakage at No. 3 plant's cable pit through the use of fabric in the trench, and concrete.
Posted by Will Davis at 8:07 AM