Apparently, high seas are keeping the mega-float barge from getting farther than Onahama. There is no word as to when it will leave that port for Fukushima Daiichi.

TEPCO has made a press release covering photos and rad levels found inside the No. 2 reactor building. Here is TEPCO's survey of the first floor. Note the photo location numbers on the photos on the sides, and the locations of those photos (the circled numbers) on the diagram of the first floor. 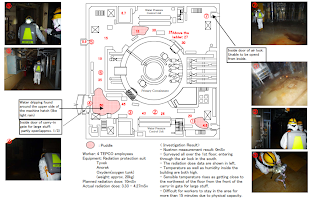 Here are the seven photos released by TEPCO, larger than above for better viewing. Click any of them to enlarge.... this applies to the diagram above, as well. 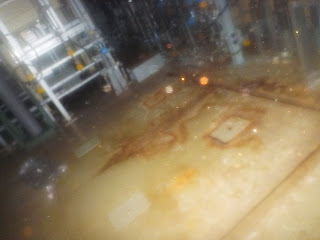 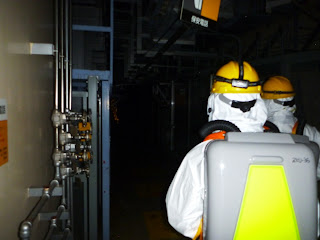 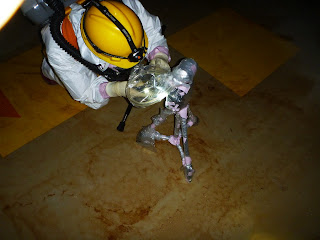 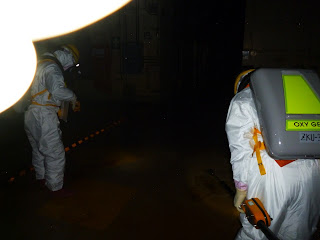 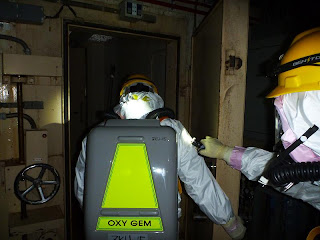 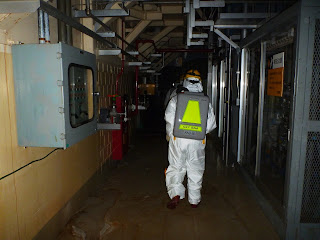 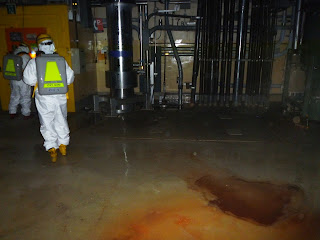 According to TEPCO, rad levels inside No. 2 aren't as high as expected... although there is certainly one hundred percent humidity, hampering visibility.

TEPCO also (according to NHK) has sent two men into No. 3 reactor building, where the men did find during a ten-minute examination rad levels of between 16R/hr and 17R/hr near the containment vessel access door.

All of these entries are, of course, to perform the initial surveys required to establish stay times and possible installation of shielding, temporarily, to get water level indication restored, to prepare for nitrogen injection, and to prepare for the new cooling operations. Water level indication and nitrogen injection are already achieved (nitrogen for a long while now) at No. 1 plant.

As might have been expected, there seem to be higher levels of seawater contamination right outside the plant (but inside the break wall) that probably coincide with and are due to the very much increased rate of injection to No. 3 reactor.. now through two paths. This has driven temperatures down considerably; in fact, the last reading I saw showed feed nozzle temperature below lower RPV head temperature for the first time. TEPCO is investigating the leakage.