TEPCO has released photos taken at Fukushima Daiichi as the tsunami hit. I've assembled them into a slide show movie and the sequence is now available on the Atomic Power Review YouTube Channel. Link to new video below.

This continuous increase is of interest; also of interest is the injection of 180 kg of boric acid on May 15th from 14:33 through 17:00. Soon after this, there appears on the temperature tracking graphs released by TEPCO a sharp rise in a number of temperatures, particularly those at the top of the RPV but also at least one related to a downstream (tailpiece) temperature reading on a steam relief valve. There was also a drop in RPV indicated water level that this increasing of feed rate has corrected.. the drop in level occurring before the borated water was added. I'm both looking for more details on this and waiting for another TEPCO press release that might mention their thinking.. and their suspicions.

Finally for now... TEPCO has a diagram showing what exactly it means when it says that it will apply grout to the suppression chamber ("toroid") at No. 2 plant. Essentially, TEPCO intends to fill the whole room with concrete, it appears, from the illustration below. This will seal the chamber and allow recovery vis a vis cooling of the core to go forward. 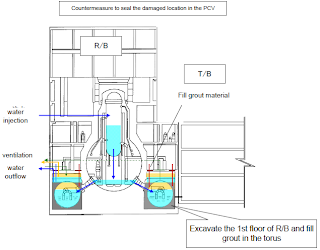