Thank you to all our regular readers and all our new ones for setting a new one day discrete hit counter record, for the Blogger calendar day April 12th. I appreciate your visits and your comments and questions very much.

Very little new to report from Fukushima Daiichi at the moment; water transfer procedures continue, while the rest of the temporary silt screens have been mounted across the seawater inlet gates inside the breakwater. Note: These will have to be removed once the seawater pumps are ready to be placed back in service.

It is very interesting, and heartening, to see the relatively calm worldwide response to the NISA decision to self-raise the INES level at Fukushima Daiichi to Level 7... except in the United States, that is. Most organizations and most nations are responding with calm, and level-headedness.

Of course the status up there at "Level 7" was previously only occupied by the Chernobyl-4 accident in 1986 and one wonders, given the admission by everyone who has looked at data that Fukushima Daiichi has in total released about 1/10 the radioisotopic material that Chernobyl did, how it's possible that three concurrent reactor accidents all with core damage and four spent fuel storage facility incidents/accidents with at least one guaranteed fuel damage event (that at No. 4 was as we noted confirmed, but we all already knew it) could have a LOWER total release than an accident at one reactor. If we take the consideration of "source term," used by many AEC / NRC calculations for plant siting and accident evacuation area which is based on total megawatt capacity, it would seem that the Fukushima Daiichi situation would HAVE to be worse, correct?

No. Not even close. Two reasons: Steam explosion in the core, and lack of containment. These refer to Chernobyl-4.

The details are so widely available on the accident scenario that we are obligated either to give the briefest of accounts or else go into detail never before seen; since the real 'front page story' is Fukushima, we'll select the brief version.

Chernobyl-4 was destroyed by a reactivity addition accident; the core was placed in a condition, from a core physics standpoint, in which it was extremely unstable .. and it was done deliberately so that the operators could complete a required test. (A recirc pump flow coastdown test..) A test that would tend to increase the power rating in a manner of behavior that many Soviet operators may not even have been aware of. When the test was initiated, power rose instantly in the core, which caused the core to increase the amount of steam void. The reactor became autocatalytic, and the resultant rapid increase in heat caused a steam explosion. (There was likely a water slug effect, like that at SL-1, which increased the destructive effect of the power burst and steam expansion.) When the top covering of the reactor was literally blown right away, and all the coolant escaped, the super-hot graphite moderator, now exposed to air, began to burn fiercely. The massive release of radioactive contamination began.

Now, we're not here to go into a huge amount of technical detail on Chernobyl, or for that matter the particular model of reactor that was destroyed there (which is known as the RBMK-1000 reactor.) But we can show you the second aspect mentioned: Containment. Look back at many previous articles on this blog to study containment and you'll see (as will our regular readers) how different the illustrations I'm about to show you .. from the APRA files .. really are.

First up is an end view of the reactor complex, cut right through the reactor itself.
RBMK-1000 "Channel Type" Water-cooled, Graphite-Moderated Boiling Water Reactor with forced recirculation and external steam separation: 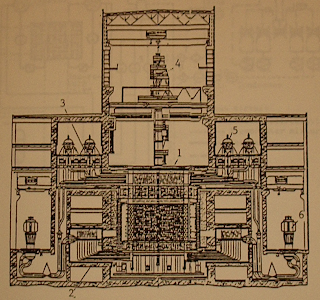 The reactor is at the center of the drawing. This reactor contains 1693 fuel channels, mounted in a giant cylinder constructed of graphite moderating blocks. And giant this reactor core is; the core diameter is 464.6 inches, while the core height is 275.6 inches. Immediately obvious is the fact that there is NO pressure vessel. The core is sitting in a concrete chamber which measures 70.87 feet on the sides and is 83.66 feet deep. Below the reactor, many hundreds of water inlet pipes feed water to the vertical channels where it's heated until boiling. This mixture exits the top of the reactor through many steam/water pipes and enters the moisture separator drums marked "5" on the drawing. (Note: Those of you familiar with the old GE BWR/1 plants, specifically Dresden-1 and Big Rock Point will recognize these external style steam drum separators.. and they're sort of distant cousins of the early steam generator designs manufactured by Foster-Wheeler and Babcock & Wilcox for Shippingport Atomic Power Station and Indian Point 1.) Anyway, the separated water is returned to the reactor while the steam leaves this building area for the turbine building. Note the recirculation pumps, "6" on the drawing.

It is hard to imagine a more highly complicated primary plant design. From what I can recall most or all of those entry pipes under the reactor had a throttle valve, and part of the plant setup was to properly adjust each one of these for proper flow in the channels above. What is more, many large BWR reactors have been described as "loosely coupled" here in the US.. this reactor core is as loosely coupled as any ever built. (For you non-nuclear folks, this means that nuclear characteristics in one part of the core might be totally different, steady-state, from those in another part.) As mentioned, this core has 1693 channels for fuel, and uses about 200 control rods for various specific purposes.

Here is a side view showing not only the reactor building, but the turbine building of a fairly typical RBMK-1000 reactor plant. 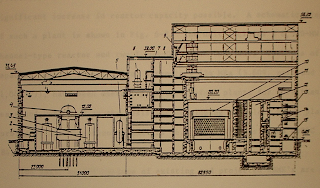 One of the most prominent features in both illustrations is the machine seen above the reactor; this is the refueling machine. The RBMK-1000 is refueled WHILE CRITICAL and ON LINE, by use of simple top covers for the channels and this large machine. It pulls out spent fuel units and replaces them with new ones while the plant produces power. Again, we must note that this sounds good until you realize that you cannot do this if you have a pressure vessel of any sort.

Item: Soviet pressurized water reactor plants do of course have pressure vessels. But most of them don't have any type of containment, just as the RBMK series plants don't have any containment. (Soviet PWR plants have the designation VVER.)

In the illustration above, the turbine building is on our left and we see the end view of the turbine and the condensers. In the reactor building, we can see to the right of the reactor a fuel cooling chamber for immediate deposition of spent fuel units, next to which is an open space between the concrete walls. Just outside of this next set of walls is actually accessible by vehicles for bringing in fresh fuel and taking out spent fuel. Yes, there are heavy concrete walls around the reactor, but access is permitted to the building through large doors that trucks go in and out of. Further as pointed out, we see just how open the plant is above the reactor itself.

It should now be totally obvious to anyone why the photos of the destruction of the Chernobyl-4 plant looked so bad; nothing was there to contain the energy. When exposed to air, the graphite moderator burned fiercely.

There are no reactors like this in operation anywhere in the United States. Or in Japan, for that matter.. or anywhere else in the world.

Finally just for comparison, we mentioned how large the core volume of the RBMK-1000 is and to compare with a plant variant at Fukushima Daiichi, namely the BWR/4 which is that found in Fukushima Daiichi No. 2, 3, 4 and 5... The BWR/4 has an active core height of 144 inches and a core diameter of 158.5 inches. The core output of the RBMK-1000 is 3200 MWt while the BWR plants we're comparing now are 2381 MWt. Even if we step up and compare apples to apples, using Fukushima Daiichi No. 6 which is a BWR/5 at 3293 MWt the core active length stays the same at 144 inches while diameter increases to 187.1 inches. This again against the RBMK core at 275.6 inches high and 464.6 inches in diameter. Which is also full of graphite. Without any pressure vessel.

Hopefully this will put the Chernobyl comparisons to bed, at least so far as plant details are concerned.