There are very many problems that TEPCO has to address in its response to the accident at Fukushima Daiichi; not surprisingly, the volume of official material released by TEPCO is very large. I've given it a good first look, and here are some of the things that jump out at me...

It appears that TWO incarnations of building coverings are planned; one for the "Step 2" phase of the plan which is around 3-6 months after "Step 1" is completed (and that should take 3 months) which will be a simpler type with air filtration to trap released particles. This may be the fabric type covering mentioned a few times before. In the plans for Step 2 though is the remark that detailed plans for a "full-fledged measure" of new external containment, with concrete walls and roof, should be completed at that time. So it looks as if there will first be a lighter enclosure of some kind, followed later by a heavy one which is the one that the defueling will eventually take place in.

The detailed releases by TEPCO do also indicate the desire to flood the PCV's or Primary Containment Vessels (dry wells) up to the top of the active fuel region. The few illustrations released so far are not of what you might call a highly technical nature but they seem to indicate at least feed to the plant through the normal feed line and then removal of the water from the suppression pool. There is also one that shows a totally separate closed circuit cooling system that circulates only through the pressure vessel and a heat exchanger. Clearly the plans are in a state of flux and we'll have to see how this shakes out. To help you understand why some of these considerations are of interest to us, look at the following illustration of an earlier style BWR reactor pressure vessel and internals. You've seen this before on this site, but it's been marked up for this article... 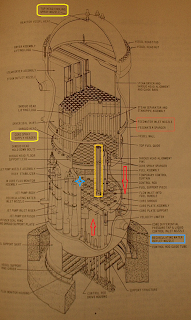 On the right at the location of the red box we see the feedwater inlet nozzle, and the sparger ring that distributes it all around the circumference of the pressure vessel. The red arrows show the normal flow for feedwater when the reactor is operating.. down around the outside of the core barrel, into the lower plenum, and then up through the reactor core. Now, in the situation we have here, water coming in here cannot be induced to go UP through the core because not only is there no flow path to be induced up and out but, as we now know, water is leaking out somewhere low.. probably from somewhere in one of the recirculating lines. Or multiple places. Look at the blue box showing the recirculating line outlet nozzle; if there is a leak in this system, the highest water level you can maintain in the pressure vessel is the height of the jet pump standpipes... look for the blue star. That's about 2/3 of the height of the active fuel region when the fuel is intact... see the tall yellow rectangle showing one installed fuel element in the core. Thus, in order to get water flow THROUGH this region in this condition, you need water supply from above... see the other yellow boxes showing the location of two of the upper spray sources for the reactor core itself.

It's important to note that it's believed that the reactor core material is still above the core plates. TEPCO's recent plan seems to confirm this, in as much as they're saying that they'll flood the PCV above the level of active fuel. That will also give some water contact to the lower head of the reactor vessel (although not a large amount, as readers here already know) and further improve heat transfer. It will also shield some radiation.

Item: It appears, quite sensibly, that the jet pumps are not working. One might imagine early failure due to lack of reactor building component cooling water and particularly any time spent pumping salt water with core debris possibly mixed in. Thus, they cannot be counted on to force any water up through the core area.

TEPCO is well aware of both the clogging problems and the corrosion problems that may have been caused (will have been caused, you can be sure) by the use of salt water as an emergency measure and this will certainly play into the system plans, on a plant by plant basis. The exact final cooling layout at one plant may not exactly match another, in other words.. and No. 2 will lag behind until its suppression pool integrity can be restored by TEPCO (it indicates use of cement / grout for this kind of work.)

TEPCO was instructed by the government to produce this plan and while there are very many problems to be overcome, it seems that TEPCO does have a handle on all of the problems extant at the site right now and for the first time has let the world know just how aware of all the problems it really is. To those who read this blog regularly, the problems are all known but this plan is the first time TEPCO has itself stated all these problems and addressed fixes to them; let's hope they are aggressive with the implementation of this plan.