Very few new details... However, the most recent TEPCO hourly photo shows a barge with a crane on it (see yellow arrow I've added) working on the north end of the intake channel screen / wall. This equipment is probably either dredging to prepare for installation of the new contamination spread prevention screens, or else installing the screens themselves. 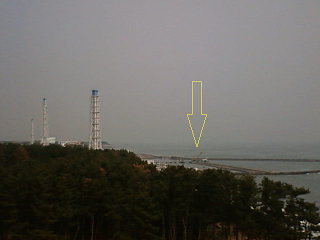 TEPCO has reported, and JAIF echoed that the water in No. 1 plant and No. 2 plant main condensers has been transferred to the condensate storage tanks. Preparations are underway, thus, for the initial moves in securing a safe location for the most highly contaminated water. Work on the rubble all around the No. 1 - No. 4 reactor complex continues with the remote control construction equipment mentioned before.

The latest temperature reading on No. 1 reactor plant (feed nozzle temp) is essentially that of the previous report, while pressures both inside and outside the pressure vessel continue their very slow, but steady increase... nitrogen injection continues.

There is some data, which we're looking at in detail, showing a spike increase in airborne contamination inside the drywells on the plants concurrent with, or shortly after, the recent ~7 scale quake off Miyagi prefecture. These readings may simply have been due to the quake shaking loose contaminated material that was already inside the drywells and which had settled .. perhaps a dry crud burst of sorts. (That's for all you nukes out there.) We'll keep watching these figures; they're reported as CAMS figures on NISA / JAIF report documents... which we hasten to add are again slipping behind time-date wise. Speaking of which... NISA, we might recall, thinks that air tightness may have been lost on all three reactor pressure vessels, so that it's also possible that the increase in CAMS readings is directly from core material. But it's too early to tell this yet, with the sparse data we have right now.