Note; Thanks to all of my dedicated readers and loads of new ones this blog is now one of the most widely read blogs on nuclear energy in the world. THANK YOU. I have many e-mails and comments and I will try to answer all of the emails and as many of the comments as is possible, as soon as possible.

Efforts to stem the leakage from the cable pit at No. 2 plant today have not been effective. Apparently the polymeric substance -- like that used in diapers, if we would like an everyday reference -- hasn't gotten to the end of the cable run where it was supposed to go. The addition of other substances apparently has had no effect on improving the situation.

NISA has provided, today, a very good diagram that finally shows the layout of the pipe trenches in detail as well as the cable trench. The flowpath for the leakage appears to be, in fact, an intersection between the pipe trench and the cable trench after all, if I read the latest releases and interpret this drawing correctly. Frankly, if the cable trench is underground leaving the turbine building I'd imagine both it and the pipe trenches are filled with water all the way through. (We keep calling these "trenches" and that may be the translation of the Japanese word, but remember that these are actually tunnels.) Here's the NISA diagram: 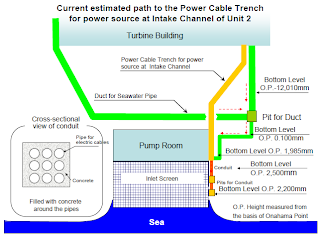 I have noted, as has TEPCO, NISA and a number of my readers here and elsewhere the slow rise in pressure at the No. 1 plant.. as well as the fluctuations in temperature. I have attributed the temperature rises previously in this blog to the alterations in flowrate of core cooling water, as TEPCO tries to balance cooling versus flow of water out of the plant, into uncontrolled areas. The pressure at this moment is only about 92 psig, which is not a problem considering an operating pressure on a plant like this of about 1000 psig.

The most interesting fact I've read today is an almost-footnote sized remark in a report of NISA's briefing, by Mr. Nishiyama. He mentioned that, on Tuesday or else soon, TEPCO will inert the containment of No. 1 plant with nitrogen. You do that to prevent another hydrogen burn or explosion; surely then TEPCO and probably NISA as well feel that either radiolytic or metal-water generated hydrogen (or both, probably) are a continued threat at No. 1 plant. The extensive estimated fuel damage of this plant, coupled with the slow rise in reactor vessel pressure, are probably the drivers for this move.

All agencies are now admitting freely that the normal plant systems and lineups, or anything like them, for core cooling are a month or months away. Until that time, there is probably the likelihood that the "feed and bleed" cooling will continue, meaning continued effluent of highly contaminated water to go somewhere.