Primary plant temperatures continue to remain well in control at plants No. 1 through 3, even if there is little or no flow through the cores yet.

The process to fill No. 1 plant dry well continues, with primary water injection rate at six tons per hour. Nitrogen flow was stopped as of last report. There is a "new" news story circulating (for instance right now it's on NHK) that TEPCO plans to add a heat exchanger to No. 1 plant to, as is being reported, "speed the recovery" or some such. For one, this won't speed any recovery since the damage is done, and for two this seems to just be a reiteration of the external heat exchanger story that came out a while back (which will be done for all three plants with reactor cores.)

Problems at No. 4 plant continue, with the sustained need for large amounts of water injection into the spent fuel pool, while TEPCO tries to figure out how to reinforce the building so that the fuel pool's mass does not collapse the structure.

TEPCO has made some further statements about the preventive measures taken to control radioactive contamination in the Pacific Ocean, and has released this informative picture you now see. Click to enlarge. 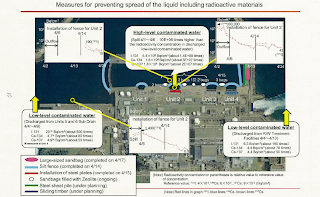 Even the location and number of zeolite bags placed in the water is delineated. This is one of the more informative pictures TEPCO has released, of this type.

Below is an official TEPCO press photo of one of these Zeolite bags being lowered inside a cage, by crane, into the water right off the plant. 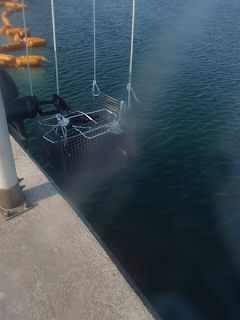 Speaking of TEPCO press photos, here is another good one; this shows the water sampling chamber being lifted out of the spent fuel pool at No. 4 reactor plant. The concrete pumper truck was modified to be able to both drop in and retrieve this by cable, as well as provide television camera footage from the tip of the pump arm. This photo is from outside. The traveling crane is very much in evidence; it's green. 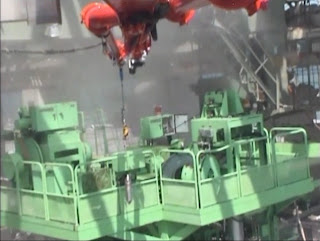 TEPCO is now worried, because this spent fuel pool (containing some 1500+ fuel assemblies) seems to continue to heat up, so that the effort to use very minimal water in the pool to control its weight is not working out in the grand scheme of things.

We hope to get some more, and better, details about what's going on at the site this evening and overnight since the weekend is over in Japan.