There is a report that the (shut down) Higashidori Nuclear Power Station is in a Loss Of Offsite Power status. The report says that "auxiliary means" are being used to cool the spent fuel pool at this plant. Below is an illustration from the plant's owner-operator, Tohoku Electric Power Company. 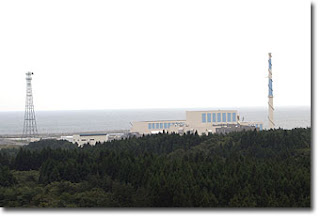 This plant site has a single reactor plant. This is a Toshiba BWR-5 in an advanced Mark I vessel and containment. This plant is very new, having gone online in December 2005. The plant is rated 3293 MWt / 1067 MWe (net.) One further plant is planned for the site.
Here is a map from one or another of the Japanese official sources that we've quickly marked up to show the location of the two Tohoku plants just mentioned this afternoon as being LOOP or nearly LOOP. Note their northern siting, but proximity to Fukushima Daiichi generally in this most recent earthquake prone area. 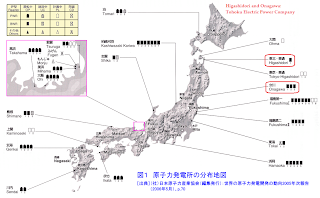 We will update everything on Higashidori and Onagawa as it comes in.

6:40 PM Eastern UPDATE: It sounds now like Higashidori has one of three offsite power transmission sources available, although the site was on the diesels for some time. Apparently a spent fuel facility south of this plant is still on EDG power.
Posted by Will Davis at 5:04 PM