TEPCO has done us two favors at once. First, it has revealed just exactly where the now-media-permeating "7.5 million times" sample was taken... inside the breakwater as we might have thought... and it did this along with a fabulous overhead diagram of the portion of the Fukushima Daiichi site that covers reactor plant complexes No. 1 through No. 4. I have colored the reactor buildings red and the turbine buildings gray (with service building spaces between the turbine buildings) to help those who get glazed eyes looking at line drawings. Note the green pipe trench / tunnel routing, and the accompanying purple cable tunnels.
Click to enlarge! 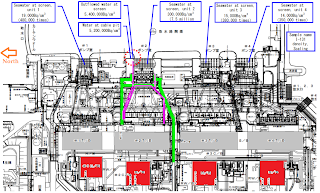 Note that I've marked NORTH on the drawing, and that when viewed as seen here the Pacific Ocean is off the top of the illustration. Many other features can be noted on this illustration and I expect we might use it again, perhaps marked differently, for later articles.

Briefly, TEPCO seems confident that the "liquid glass" or sodium silicate injection into the area below and around the tunnels is starting to have effects on the positive side in stemming the leakage rate into the sea. It appears that there is a gravel layer supporting and perhaps around some of the cable and pipe tunnels that are nearer the surface; TEPCO is filling the voids in this material by injecting the sodium silicate which expands and plugs it. More details to come.