As reported very early this morning on this site, TEPCO continues to discharge something more than 10,000 tons of contaminated water to the Pacific in an attempt to clear up on-site storage space for the very highly contaminated water that is filling the No. 2 plant turbine building, and apparently also flowing outside and to the ocean through one or more paths.

This unprecedented step is clearly something never even considered before. However, TEPCO and the Japanese agencies and government are also dealing with the very first ever accident at a multi-reactor site that involves more than one reactor. (Although other reactors were on site at Chernobyl, one more on site at Three Mile Island, and one across the road from SL-1, none of those accidents involved anything happening at any more than one reactor plant.) At Fukushima Daiichi, three simultaneous reactor accident events are in progress, as noted many times here, also concurrent not only on-site but physically interrelated with four spent fuel facility fuel damage accident events. From the standpoint of accident mitigation and management it's important to note that conditions at the three plants with reactor cores installed are all different, even though outwardly the situations are similar. The same holds true for all four spent fuel pools. One might assume one management team for each of the four plants, with one overseeing management structure, would be optimal but we really do not have a solid view of how TEPCO is structuring the oversight on the work underway now. This organization, its implementation, changes, strengths and weaknesses all will surely come out later, and will be one of the most important points to consider and review in the study of this accident in future years as utility companies with large multi-reactor sites begin to plan management strategies and structures to be implemented in the case of a future similar event.. which of course now they must.

Getting back to the news details, it has been reported that ROSATOM in Russia will provide a floating waste disposal plant for the Japanese to use at Fukushima Daiichi. ROSATOM's site doesn't reflect this yet. At this point, the location of the facility isn't clear (it's been used for decommissioning submarines) and it surely won't be at Fukushima Daiichi immediately. Although this, and the still potential use of the 'mega barge' are encouraging and probably very helpful solutions the situation is serious enough that TEPCO cannot wait for them to arrive to implement a water control plan -- the company clearly wants access to the turbine buildings ASAP and wants to restore recirculating cooling instead of feed and bleed.

We have a new, section view of the piping at the Fukushima Daiichi No. 2 plant showing, again, the pipe trench or tunnel and the electrical conduit. This is provided by NISA. 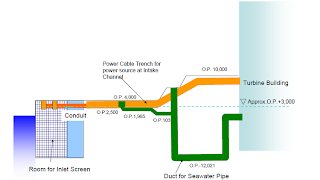 Again, TEPCO isn't sure of the flowpath of water into the pit. It is starting to seem, from various releases and statements that there might be other ways the water is getting into the ocean. One might guess that if the cracks in the concrete are deep, perhaps water flow has begun to create pockets or spaces and perhaps established other flowpaths to sea. My point in mentioning this is that TEPCO probably also thinks the same thing, and since they do and they already know one path to sea (even though the total contributions to it are unclear) we now have the rush to dispose of water on site, to allow room for highly contaminated water to be moved so that the feed and bleed is stopped.

We'll have more details on this situation with water and radwaste management as it becomes available.