Here are some interesting official TEPCO pictures of the kinds of equipment being used on site, with our commentary.

We've already seen the excavators being used; here is one style of crawler dump carrier being used to haul containers of rubble to the temporary storage ground. 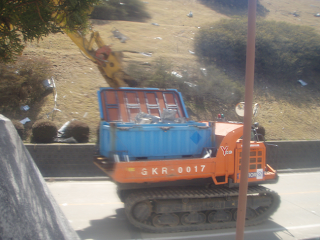 In this view, the excavator has filled the container on the carrier vehicle and is about to shut the lid of the container.

This style of carrier vehicle is the Hitachi EG110R, specially fitted with remote control gear. CLICK HERE to see the Hitachi sales brochure for this piece of equipment.

Here is a view showing one of these EG110R trucks having dropped off a container. 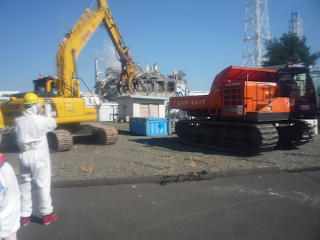 Remember, all photos can be clicked on and enlarged.

There is another model of carrier vehicle in use on site, but we haven't figured out the make and model yet. They're green. Note that this one appears to be carrying some sort of water tank with a water cannon on top of it. Note also the camera mounted on the hood. 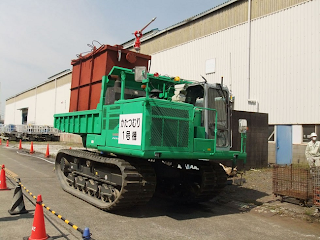 Mitsubishi has produced a modified heavy fork lift truck with lead shielded cab for use at the site, and released a press photo of the machine which TEPCO has also released. It appears to be the first manned design for use on site; we might think of this as a 'second generation' of modified equipment for the site. 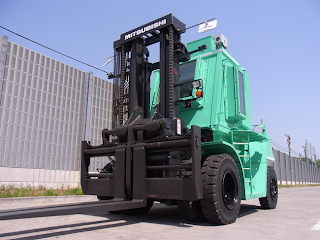 Finally, not in use now but possibly later.. a spent fuel cask carrying vehicle with a capacity of 38 metric tons. This press photo was posted by TEPCO for reasons unknown... probably, it was to show the kind of vehicle one might expect to be used to carry highly contaminated parts that need to be moved in a shielded, and protective, cask. 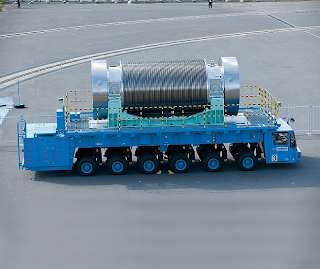