There were some hints earlier, within the last 24 hours or so that the Japanese would upgrade the INES accident level at Fukushima Daiichi from Level 5 to Level 7 but nothing concrete was announced.

However, news just coming out in Japan is indicating that the NSC (from whom we still never seem to hear anything) along with NISA and the Japanese Government will announce later today (the 12th in Japan) that they're upgrading the categorical assignment of the Fukushima Daiichi accident to Level 7.

At present, the level of 5 is the same as that assigned Three Mile Island, while 7 has only been assigned to Chernobyl.

Below from IAEA material on the INES is a look at a portion of a table that we've selected to show only the official "accident" categories. Click to enlarge the picture so it's readable. 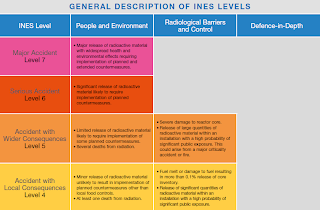 And below are some examples of accidents classified by INES levels. As mentioned on this blog the last time we discussed INES levels, classifying the Windscale accident and the Three Mile Island accident as the same class in terms of curies of material released is ludicrous, but that's what the IAEA apparently decided. 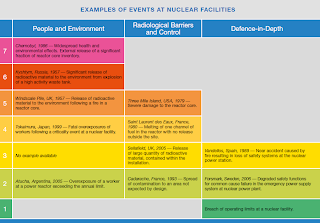 Clearly this is an admission that this accident is of the worst possible caliber. Why it was not upgraded to a Level 6 prior to this is not known. Apparently a press conference is planned by the NSC in the morning hours in Tokyo. Much more to come.