We've examined some of the reasons why the Chernobyl accident happened, and some of the plant design features here on this blog. What's really left is to try to give a brief idea of one nagging question: Given their apparent competence in many ways, how did the overall Soviet nuclear energy establishment ever get to the point not just of having one RBMK-1000 reactor that then had an accident, but a multitude of these dangerous plants all over the place? To figure that out we will look briefly at two sources (see note at end) and look briefly at Soviet reactor development.

Many countries experimented with atomic piles -- in the original sense -- and these of course developed directly into large graphite moderated reactors for weapons material production in a number of countries. In the USSR, this design path apparently was also selected for their first commercial atomic power station. This project was very early; it was started in 1949.

This first plant, the Obninsk plant, was a prototypical channel type water cooled and graphite moderated reactor rated 30 MWt / 5 MWe. This was the first of a series generally referred to in official literature as the LWGR series, meaning light water cooled channel type graphite moderated reactors. The reactor core contained 1213 pounds of 5% enriched Uranium; the reactor also produced steam with some superheat. While the Soviets made a good deal of press about this plant it's important to note the total difference in their socio-economic structure and really it's incorrect to call this a "commercial plant" since everything there was government owned. Further, this plant was built at one of the major research labs, or rather right next to it-- kind of like the reactors at Argonne National Laboratory. Still, 1954 was only one year after our STR (later called S1W) prototype was completed and tested, and four years before our first commercial atomic power station went on line (Shippingport.)

This core design offered attractive possibilities, compared with other types including very importantly the ability to produce weapons-grade plutonium while producing energy. Further, these reactors could be designed to superheat steam, raising plant overall efficiency. They could also be refueled while critical and on line, making availability theoretically very high compared to other types of nuclear plants. For these reasons, design work forged ahead on this concept.

In 1958 the "Siberian plant" went into operation. This was a highly classified weapons production plant using, again, channel type graphite moderated reactors and this, while classified, did add to the Soviet knowledge with this type of reactor.

The next power-production plant of this general type to be constructed was at Beloyarsk. The first reactor on this site was placed in commercial operation in April 1964 after much design work. The reactor was much larger than the one built at Obninsk, and larger than the six at the Siberian plant. This reactor used a two-pass BWR circuit in which during the first pass the water was brought to saturation, and boiled; in the second pass second-circuit steam was superheated. The first LWGR at this site was rated 285 MWt / 100 MWe. The high effieciency was due to the degree of superheat.

Experiments with the original commercial 5 MWe plant's core, inserting test boiling fuel elements (instead of the original pressurized water non-boiling elements) led the Soviet designers to the realization that this concept could be made to work. This was the fundamental change between the prototype plant and the Beloyarsk plant.

The reactor core of this plant had a diameter of 283 inches and a height of 236 inches. It contained 730 steam-water heating fuel assemblies and 268 superheating fuel assemblies. The superheat assemblies were in an annular region, with boiling elements inside of and outside of them. This was said to be in the region where they would affect reactivity the least.

This reactor plant used a very complicated flow pattern for the water/steam. Basically, water entered the boiling fuel elements and the discharge of these was taken to a drum, where steam was separated and sent to a preheater/evaporator unit. It gave its heat off to secondary water in this unit, and was then returned to the feed and preheating system. Meanwhile water on the secondary side of that preheater/evaporator was boiled off, and the steam sent through the superheat elements in the reactor. From there it went out of the reactor enclosure proper and on to the turbine and auxiliary systems. This is vaguely analogous to the complicated dual-cycle BWR concept GE used at Dresden-1, although not exactly; it's an early example of an overly complicated system for sure.

Here is a view of the first plant built at Beloyarsk. Note the resemblance to the much later RBMK-1000 plant you've seen on this site before. 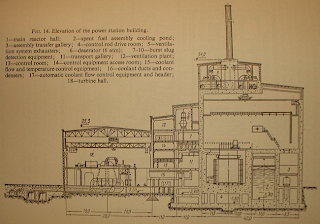 Although the original plan was to have four identical reactor plants at Beloyarsk, design revisions took place and the next reactor at the site to come on line, No. 2, was larger and yet simpler. The on line date for this plant was October 1967. This plant used a single flow for both boiling and then superheating, and was rated 530 MWt / 200 MWe. This plant was also classified generally as an LWGR plant, even though the design was not yet standardized. No further LWGR's were built at this site; it appears the Soviets placed two other design plants there, and decided to work on redesign of this type of reactor plant.

Four small 12 MWe LWGR plants were built at Magadan, being labeled as the Bilibinol station, in 1974 but apparently these fall outside the commercial plant development.

The RBMK-1000 was said to have been the product of years' worth of testing and development when the first unit of this class was brought on line in 1974 at the Leningrad Nuclear Power Plant. This marked the beginning of the RBMK era for channel type reactors; all thereafter were built to this design, except the very late RBMK-1500. The RBMK-2400 was designed and discussed but never built. The main production RBMK plants did not superheat steam in the core, but the newly designed RBMK-1500 and 2400 plants were designed for superheat, apparently.

So there we have a very brief technical background of A to B to C for the Chernobyl station's RBMK-1000 plants, and a few of the incentives to develop such plants. People who are interested in our previous posts should use the Google search box on the blog and find our previous entries; this is a good tool to use for any topic on this site.