In our previous installment, we looked at some features relative to the reactor cores, pressure vessels, recirculating water flow and normal core water flow while the plant is in operation. We also looked at a view of the reactor building itself. Let's expand our view a little bit and look at some of the other systems.

First let's look at the primary function of the reactor, which is to generate steam for use in providing power for not only the plant's many systems but for the grid. It will be helpful to look at this flow diagram from WASH-1082. 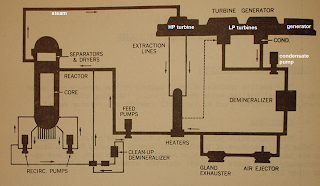 We see above, that steam exits the reactor and is directed to the High Pressure turbine. Moisture that would be damaging to the later LP turbines is extracted, used to heat the feedwater to the reactor and then sent to the condenser. Meanwhile, the majority of the steam continues to power the Low Pressure turbines, on the same shaft as the HP turbine and the generator. The steam, now much less energetic, exits the turbines and enters the condensers where enough heat is removed to convert it to water. (The heat is rejected to service water, which in the case of Fukushima Daiichi is seawater.) The condensate pumps remove water from the condensers and direct it through demineralizers, or condensate polishers, a series of feed heaters and finally to the feed pumps which have enough power to pressurize the water highly enough to enter the reactor against the roughly 1000 pounds of pressure inside. From here, we've already seen in the previous post how the water travels in the reactor and is converted to steam.. so we now have the whole, simplified cycle.

Now, at Fukushima, it appears that the earthquake triggered an automatic plant shutdown .. which means full scram of the reactors (full rapid insertion of control rods) and tripping of the turbine throttles. At this point, the plants' emergency diesels started and began running to provide power to the many electric pumps (some of which you've seen in this and the last installment) and other systems on site. One might imagine that, at this time, the reactors were being slowly cooled down via dumping steam through the dump lines directly from the reactor to the condenser in a controlled fashion. Thus, although the turbines were bypassed, steam flow and water flow that was removing decay heat from the reactor cores was very much as normal when the plants are operating even if at very greatly reduced rates.

Arrival of the tsunami would have changed all that. All electric power went out; this means loss of all AC power for all the pumps in the plants. DC power, via batteries, was still available and there was at least one system that could be used in this case to provide some core cooling with no available electrical power. This system, using steam from the reactor to drive a steam turbine water pump, is called RCIC or the Reactor Core Isolation Cooling system. Operation of this system requires only station battery power. See below. 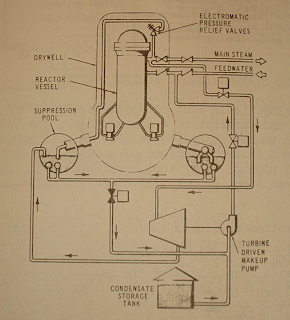 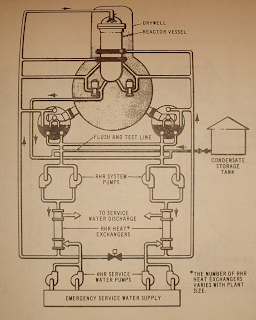 Above is the RHR or Reactor Heat Removal system. This is really a flexible system, with numerous valves (not shown) and various inlet and outlet pipes so that the system can perform a number of different functions as needed. The system can partially reflood the core (LPCI or Low Pressure Coolant Injection function), perform cooling of the containment (the drywell, that is) or it can be operated as a shutdown cooling system. 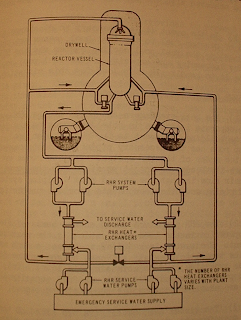 Above, and again from WASH-1082 we see the system configured for Shutdown Cooling. Note the flow that taps off of a recirculation pump. The system can be split during a normal shutdown process so that part of the RHR system is providing core cooling while the other is providing makeup water, essentially the LPCI function to keep core water level the same as the reactor cools down.

Note that all of this requires AC power for pumps, and note again that the RHR System Pumps and RHR System Heat Exchangers are all in the reactor building. Moreover, cooling for a number of pumps is provided by a Reactor Building Cooling Water system, which is also electrically powered.

That gives a good first look for our readers at some of the actual operative systems. Clearly, TEPCO would like to get some form of the RHR systems working again because this involves recirculating water and cooling it, instead of injecting water to the reactor core and releasing it. It's also clear that not only electric power, but access to the equipment is necessary and given the wide coverage of the radiation levels and the damage at the plants it's easy to see why this is taking so long to accomplish.

We'll make more technical updates like this for the general reader and concerned citizen.. everywhere... as they become warranted.