Here is the latest JAIF document to be made available. There isn't much news in this, except the note of gradually increasing pressure in No. 1 plant's pressure vessel.

Apparently much work at the site has slowed, or been stopped, as a result of the problems with contaminated water in the turbine buildings. Various reports have come out that the levels in the No. 1 and No. 3 buildings are higher now, not approaching the very high level in No. 2 but contaminated nevertheless.

We are getting a LOT of comments, and questions, and suppositions about just how this water, which has clearly been through the reactor core in the case of No. 2 plant, might be getting out of the reactor and into other buildings. The short answer is that it's way to early to tell. The long answer is -- there are many ways.

First, we already know that serious fuel damage has occurred. The reactor cores have seriously overheated. Hydrogen emitted from the primary coolant being broken down by neutron radiation, and possibly by metal-water reactions, has caused explosions in No. 1 and No. 3 reactor buildings. There was an explosion heard in No. 2 plant, thought to have been low in the reactor building, as in at the location of the suppression pool; this may have been a hydrogen ignition in the drywell, after hydrogen leaked into it, or perhaps it was the result of a pressure vessel failure (steam explosion.) This much we already know; what we aren't sure of is how the mixture of water and fuel material in solution is getting out.

Normally all of this would be kept in the primary coolant system, or any of the attached systems that handle primary coolant ... there are systems to sample coolant, systems to add coolant, systems to relieve pressure, systems to clean the coolant and remove radiolytic gases. All are connected to the reactor pressure vessel by pipes of course, and all of these have to get in and out of the reactor building. Oh, and let's not forget the large pipes to get steam out and feed water in. All of these have connections to, and thus penetrations through, the reactor pressure vessel. Below is a shot of a very large pressure vessel for a Boiling Water Reactor, being moved out of Babcock & Wilcox's large Mount Vernon, Indiana plant in January 1969.. from APRA files. 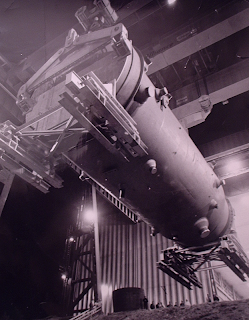 This pressure vessel weighs about 1,600,000 lbs, and was on its way to Dresden Nuclear Generating Station for Dresden 2 or 3. Note the pipe penetrations all over the pressure vessel.

Some of the penetrations on the vessel aren't for pipes that run to, or back from, the turbine building or auxiliary spaces. There are also penetrations for control rods on the lower vessel head, and a number for jet pump recirculation. Here is an illustration from WASH-1052 showing a typical BWR reactor vessel and the externally mounted recirculation piping. 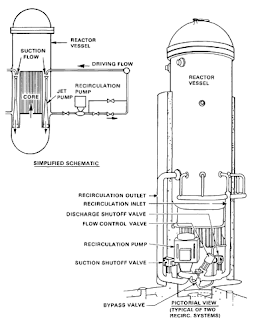 The recirculation of water in a BWR was an idea developed a long time back; it allows a higher power generation per unit size. Very modern BWRs have all the recirc equipment mounted inside, greatly reducing complexity.

Considering all these penetrations -- there are many others not shown too, such as those to detect water level, pressure, and of course don't forget the many penetrations for the control rods that I haven't shown yet -- there are quite a number of places that the leak could be coming from. What is clear is that the water and core material and gases are getting out and are either going directly to the turbine building, like through the feed and condensate system, as one example, or else getting into the drywell and then out through one of the connected systems there -- there are ways to get water in and out of the suppression chamber too.

I mentioned this over a week ago, on this blog -- clearly TEPCO and / or the NISA feel that not only core melt, but maybe pressure vessel failure, was possible because they used seawater to flood the drywells on at least No. 1 and No. 3 plants. Normally the drywell is just that -- dry. But one line of thought on accident mitigation and control is that if you're fairly sure the pressure vessel is in danger of failing, or has failed due to a core melt, then the flooding of the drywell with water will slow or stop the progression of the damage. The only plant that I cannot prove it was done on is No. 2, which appears to have the worst releases of fission products underway of the three.

I have deliberately avoided anything like wild speculation here, and won't engage in it now. But now perhaps even the layman can see that there are so many possible paths that the various materials COULD be taking -- and can see that it may well be different on each plant -- that speculation is risky. Couple whatever damage was added to the overheating damage by the hydrogen gas explosions and you have a serious range of possible paths for this water to be getting out. And again, this could be entirely different on all three plants.